Don’t believe our planet is warming up? Look at this. 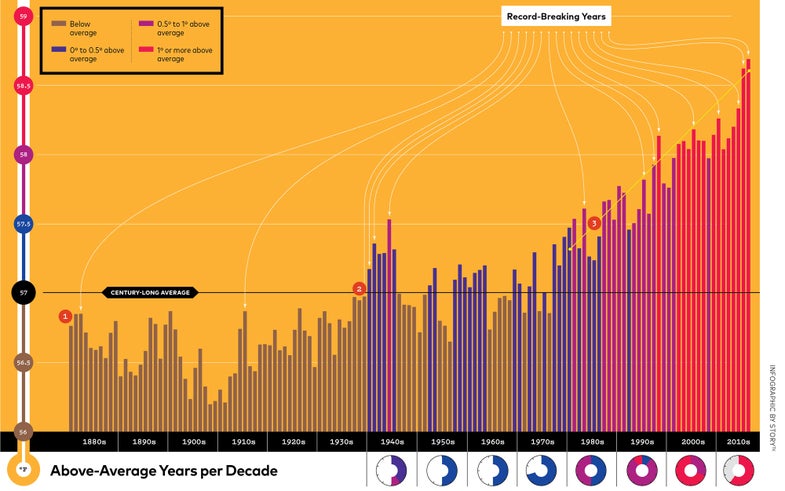 2016 WAS OUR PLANET’S HOTTEST YEAR since humans began keeping records, with average global land and water surface temperatures spiking to 58.69 degrees Fahrenheit. That’s 1.69 degrees warmer than the 20th-century average. It might not sound like a lot, but the difference between our current global average and one during an ancient ice age—when the U.S. sat under glaciers 3,000 feet deep—is only 5 degrees or so, according to the climate record preserved in ice and trees.

The same record shows that changes of this magnitude simply don’t happen over a mere century. Human fingerprints are all over the recent temperature trends. Industry boomed in the late 1800s, sending new pollutants into the air. As a result, carbon dioxide and other greenhouse gases, which trap heat inside Earth’s atmosphere, have multiplied. One estimate suggests that CO2 emissions in 2011 were 150 times higher than in 1850.

Natural fluctuations, such as El Niño, played a part. But if global warming is like riding the up escalator, these cycles amount to jumping up or crouching down along the way: Temperatures might rise or fall, but overall, climate change keeps pushing them skyward.

Meteorologists in England started collecting weather statistics back in 1659, but it wasn’t until 1873 that countries began to share annual data through what would later become the World Meteorological Organization. So the official global record doesn’t begin until 1880.

Booming industry and widespread car ownership likely spurred this jump above average. It was cut short, ironically, by a burst of aerosol pollution from coal and oil, which actually cools the planet by seeding clouds that scatter sunlight. But by the 1970s, emissions of compounds like CO2 outpaced any pollutant-related cooling effects.

You don’t need a science degree to see that our average global temperature is going up. Natural weather fluctuations may keep 2017 from breaking yet another heat record, but as our hottest years get hotter, so do the ones that don’t manage to hit a new benchmark.