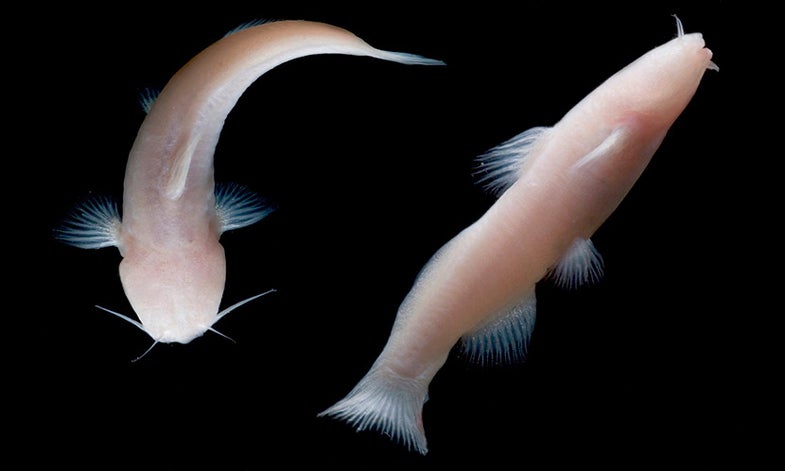 An endangered, blind catfish, originally thought to only live in Mexico, has been found for the first time in a cave in southern Texas.

The species, called the Mexican Blindcat, is a relative of the widespread Channel Catfish and other species in North America, though its coloration and lack of eyes are common with species that have evolved to live in dark and deep ecosystems.

The species, only around three inches in length, lives in limestone caves connected to the Edwards-Trinity Aquifer, which is below the Rio Grande basin.

Until now, sightings of the species were only rumors north of the Rio Grande. The Blindcat was believed to only live in the northern Mexican state of Coahuila, but apparently the fish are also subterranean border crossers.

Originally discovered in 1954, the species is listed as a foreign endangered species by the U.S. Fish and Wildlife Service.

Researchers from the University of Texas at Austin, Zara Environmental LLC, and Texas Parks and Wildlife found the fish in the Amistad National Recreation Area near Del Rio, Texas and have relocated a pair to the San Antonio Zoo.

The researchers believe that protecting this species and its ecosystem is not only important for the survival of the Mexican Blindcat, but also for the human populations around the Rio Grande.

“Aquifer systems like the one that supports this rare fish are the lifeblood of human populations and face threats from contamination and over-pumping of groundwater,” Jack Johnson, the National Park Service resource manager at Amistad who first spotted the Texas fish said in a press release.

“The health of rare and endangered species like this fish at Amistad can help indicate the overall health of the aquifer and water resources upon which many people depend.”

The Mexican Blindcat is the third blind catfish species to be found in the United States, all of which are only found in Texas in the Edwards-Trinity Aquifer.