You can tell these adorable octopuses apart by their warts

Scientists finally figure out how to tell some cute cousins apart. 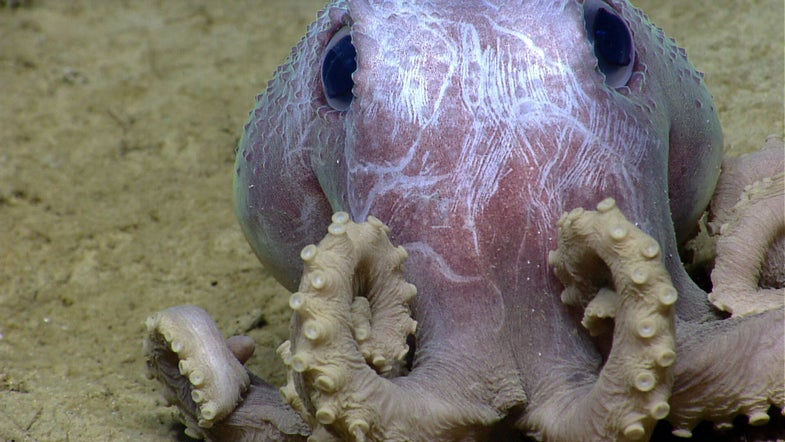 Deep beneath the ocean waves, many-tentacled creatures lurk. And they are adorable.

Life on the seafloor is hard, but the octopuses of the genus Graneledone are used to the crushing pressures and limited resources. They live in depths of over 1,000 feet (and often much deeper), they’re purple-ish, and members of the genus hold the record for longest brooding time ever. (That’s brooding over eggs, not general ennui.)

But because they live in places that tend to be inaccessible to humans, distinguishing between species in the genus is a tricky business. There are geographic divisions, with some living in the Atlantic, and others in the Pacific, but a formal taxonomy for these species remained elusive.

But in a paper published Wednesday in Marine Biology Research, scientists have nailed down that je ne sais quoi that sets two species of the genus apart: skin warts.

Janet Voigt, a zoologist with the Field Museum, has studied these octopuses for over 20 years. She was one of the first people to see a living specimen of the genus during a remotely operated vehicle (ROV) dive years ago, and has studied them inside and out for years. While she could tell that various species in the widespread genus looked different, there wasn’t a formal taxonomy delineating those differences. So she helped create one.

Voight and her colleague Jessica Kurth looked at 72 specimens from two species: Graneledone verrucosa and Graneledone pacifica. To prevent unconscious bias from seeping into their observations, during their work, they identified the specimens only by their catalogue numbers (not by species or collection location). They counted the number of suckers on the tentacles and mapped out where the tiny bumps of skin that coated parts of the animal stopped and started. Then they looked at the collections data and matched up the species to the specimens that they’d made detailed observations of. They found that G. pacifica had warts that slowly petered out along its body, while much of G. verrucosa remained covered in warts.

Counting warts on dead cephalopod specimens isn’t glamorous, but it is critical to understanding and identifying animals in the world.

“Taxonomy is fundamental to our understanding of diversity. Is this new? Is this old? Is this something we knew about before? We can’t say ‘just show the expert,'” Voight says, explaining that for many deep-sea or lesser known species, there might not be any experts. Some species have never had any experts to speak of, while others have died and taken their knowledge with them.

New information on these enigmatic creatures is streaming in every year, as programs like the Okeanos Explorer stream live videos of the deep back to shore. For Voight, it’s been a game changer.

“Biologists on land can see and smell and hear the environment their animals live in. They get to really be immersed in the habitat they live in,” Voight says. “I’d go to an industrial port and go on a ship just so I can see glimpses of the animals I study.”

The live stream from the ships might sound detached, but it’s “so much better than anything I had before,” she says. “I’m able to put together a whole story about how they live.”

She plans to continue her work figuring out the taxonomy of more deep sea creatures, including wood-boring bivalves, specimens from different areas, and whatever else might emerge in the future.

“Exploration is so important,” Voight says. “Because we don’t know what’s down there.”