These all-natural microbeads could replace your horrible face scrubs 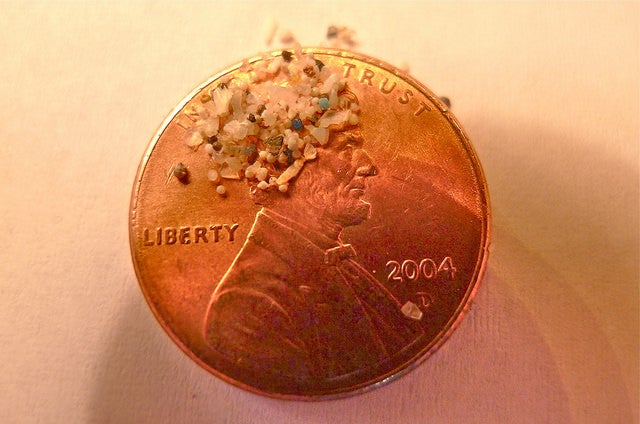 Traditional microbeads are bits of plastic so small that it would take hundreds of them to cover a penny. 5Gyres, courtesy of Oregon State University
SHARE

Microbeads are tiny balls of plastic whose alleged powers of exfoliation have made them a mainstay of cosmetics ranging from facial cleanser to toothpastes. But in recent years, their distinct downside—they pollute aquatic ecosystems—has led to them being phased out. Now, according to a new study in the journal *ACS Sustainable Chemistry and Engineering scientists and engineers from the University of Bath may have come up with a viable alternative: biodegradable microbeads made from cellulose (plant fibers) instead of plastic.

Plastics are now so common in the ocean that they’ve been found deep in the Arctic far from where humans live. And the problem isn’t just that plastic never really goes away (it just breaks down into smaller and smaller pieces). Plastic waste is also a magnet for a host of other environmental pollutants, including polychlorinated biphenyls (PCBs) and dioxins. These plastics are consumed by confused fish, at which point the chemicals also become a persistent part of the food chain. In fact, bits of plastic occasionally even show up in beer. In 2014, Illinois became the first state to ban plastic microbeads, and California followed suit in 2015. In December of the same year, President Obama signed a nationwide ban, though its scope does allow for their continued use in a wide array of products.

“Microbeads used in the cosmetics industry are often made of polyethylene or polypropylene, which are cheap and easy to make,” Dr. Janet Scott said in a statement. Scott is a reader in the Department of Chemistry at the University of Bath and an author on the study. “However these polymers are derived from oil and they take hundreds of years to break down in the environment.”

But that isn’t true of her team’s new cellulose-based microbeads, which may finally tempt persistent users away from the plastic variety.

Under normal conditions, cellulose—which a sort of tough sugar fiber that gives trees and other plants their structure—is not smooth enough to mimic the plastic in a microbead. But the material is incredibly versatile. It’s even been used to make clothes as the basis for the fabric rayon. Instead of thinking of tree bark, it helps to think of a pulp or a powder; cellulose is what’s left after the rest of the plant parts are stripped away.

Researchers dissolved the cellulose material and plopped tiny droplets of it into ethanol, which helped to harden them into tiny beads. If you’re into molecular gastronomy, the process is not dissimilar from the spherication process used to make caviar. The resulting product, however, isn’t something that you’d want to throw on a dinner plate—but it is one that you’d want to scrub down with.

While the video above shows a syringe method, the researchers have also figured out a way to do it using a membrane, which could theoretically be scaled up to meet commercial needs.

The researchers deliberately designed their plant-based microbeads to mimic the properties of the plastic stuff. It provides an even exfoliation (unlike ground walnut hulls, a common substitute, which are irregularly shaped and can be too tough), and it won’t break down inside a bottle of your favorite body wash.

But unlike plastic microbeads, once this stuff hits the bacteria-rich environment of sewage treatment plant (or even the broader environment) it will break down in a relatively short time. To sweeten the deal, the research team believes they can use cellulose left over from industrial processes like paper production, making it even better for the environment overall.

We’d bathe to that.