To Track A Meal, Bats Waggle Their Heads And Ears 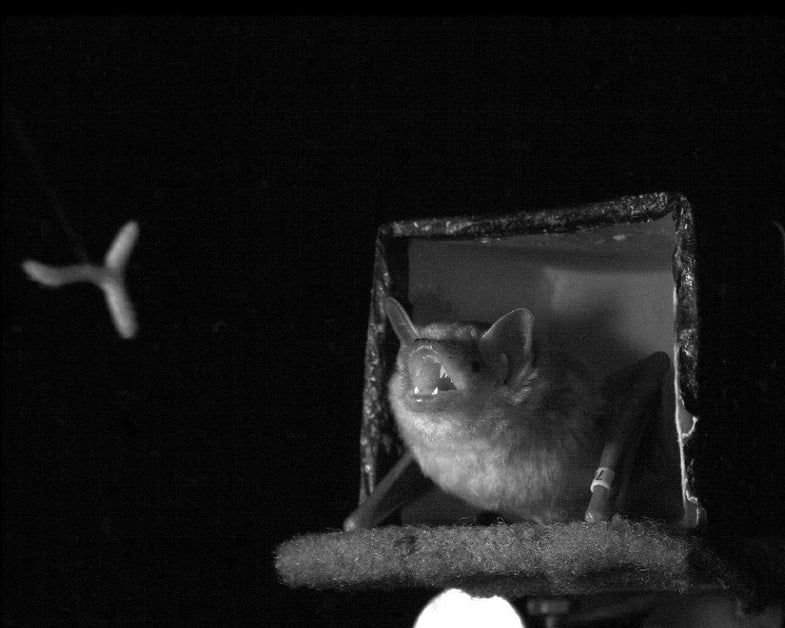 When dinnertime rolls around, bats cock their heads and wiggle their ears. It turns out that these movements help with hunting. Big brown bats (Eptesicus fuscus), a common species in North America, coordinate their head and ear twitches with sonar vocalizations to pinpoint approaching prey, indicates a study published today in PLOS Biology.

To survive in the wild, animals must be able to extract important cues from the deluge of sensory information they encounter. Humans do this by focusing our gaze on an object or tilting our heads to gauge the source of a sound. Not much is known about how bats use movements to get a better lock on what they are hearing; for the new study, scientists were interested in how they might pair this strategy with echolocation.

The scientists trained three big brown bats to perch on a platform as mealworms tethered to a loop of fishing line were dangled in front of them. The fishing line was connected to a set of pulleys and motors. The scientists recorded the bats eagerly tracking the snack as it sailed towards them, measuring their movements and sonar pulses. Reflective markers attached to the bats’ ears and heads with spirit gum allowed the team to see each twitch in detail.

As their prey approached, bats adjusted how frequently they vocalized and how long each pulse lasted. Then, they cocked their heads and twitched their ears. “We discovered that the bat ‘waggles’ the head to alter the relative elevation of the ears, while also changing the separation between the tips of the ears as it engages in target tracking,” the researchers wrote.

The bats waggled more vigorously when the mealworms moved erratically, and flicked the tips of their ears as the snacks approached. Coupling echolocation with these movements helps the bats predict their prey’s location more accurately as it moves about. Understanding how animals benefit from this kind of coordination might have applications for building robotic sensory systems, the team concluded.