Cage-free chickens keep winding up with broken bones, and scientists are looking for a solution 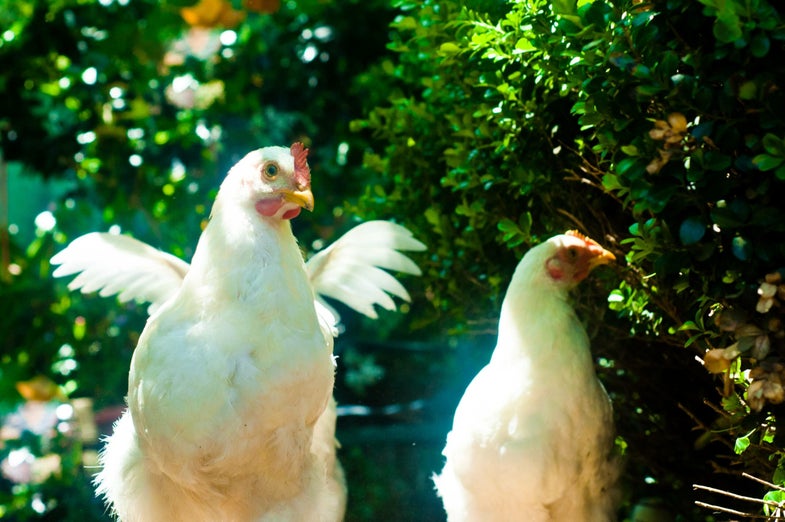 Cage-free eggs are taking America by storm. Some of the nation’s largest restaurants and retail stores—including Walmart, McDonalds, and Denny’s—have pledged to transition to this more humane source of eggs within the next decade. Instead of being born in a traditional battery cage, where the average hen barely has room to lie down, these eggs will come from birds with a little more space to roam.

‘Cage-free’ can mean different things on different farms, but typically a flock gets to move around a large enclosed space, flapping from perches to nesting areas, or rolling around in a nice dust-bath. Although the chickens still tend to be crowded (and they don’t get to go outside), overall the Humane Society says cage-free systems significantly improve animal welfare.

But like Icarus flying too close to the sun, the added freedom comes with added risks. In mature flocks, up to 86 percent of chickens may be silently suffering from broken breast (“keel”) bones from crashing into other birds, or misjudging the distance between two perches.

“It’s one of the biggest problems in commercial poultry production,” says Michael Toscano, who studies animal welfare at the University of Bern and also heads up a keel bone damage research group.

To help tackle this problem, a government-funded organization announced today that it’s offering $1 million in grants to research that can help make laying hens stronger. Half of the money comes from the Foundation for Food and Agriculture Research (FFAR)’s own federal funding, and the other half comes from the Open Philanthropy Project.

Chad Gregory, president of the United Egg Producers, whose members produce more than 90 percent of the nation’s eggs, declined to answer Popular Science‘s questions, but sent a statement supporting the initiative. “[W]e are fortunate to have support of agricultural research organizations like the FFAR to help farmers continue to provide professional care for their animals and find solutions to production challenges.”

Healthy chickens lay more eggs, so the research may help farmers as well as their birds.

Why are chickens so fragile?

You might think that as chickens are bred to have larger breast muscles, this might put extra strain on their bones. And there may be something to that, but it doesn’t seem to be one of the main factors, says Toscano, who is not directly involved with the FFAR award (although they did ask him for input).

Scientists are still trying to sort through the different culprits contributing to keel bone damage, but Toscano points to two main problems.

The first is that modern hens are laying a lot more eggs—and for a longer time—than they would in nature. “Each of those eggs requires a small amount of calcium for its shell,” says Toscano. “She’s taking some from her bones to make it, and over time her bones weaken and become brittle.”

The second factor is how they grow up. If young hens are given the space to move freely, they develop stronger bones and muscles as they run and jump and fly. An active upbringing can also enhance their cognitive and navigational abilities, making them better at, say, judging the distance between two perches. But even most cage-free birds spend their youths in cages, so they aren’t as physically and mentally prepared for the cage-free life as they could be.

Aviary design can also play a role. If a ramp is too narrow, or there’s not enough space for the chickens to flap to their perches during the evening rush, it could cause crashes and falls.

The severity of keel bone breaks can vary from small fractures to extreme damage, where, “if we were to open up the bird, you would wonder how can it could actually move,” says Toscano.

The foundation will start taking applications from researchers who think they might have a solution to cage-free bone fractures at the beginning of June. They expect to divide the funding between a handful of awards in December.

The potential solutions will likely range from food additives that strengthen the chickens’ bones, to redesigning their housing systems. Toscano, for example, has suggested that since chickens are clumsy flyers, aviaries could use more ramps to avoid collisions. “If they have to go up, it’s probably better to walk rather than to jump or fly.” Breeding and genetic engineering may even be proposed as solutions.

A system that raises the young chickens in an environment that prepares them for cage-free life is probably a longer way off. “Producers need time to figure out the transition to non-cage systems, otherwise they’ll have lots of problems,” says Toscano. “I would want to see to producers given enough time to phase in the changes over 20 years or so, so they can make the adjustments and do it well.”

There’s still a lot of basic research needed to understand how (and how much) different factors contribute to keel bone damage, and the questions can’t all be solved by one grant. But starting to hatch a solution now could really pay off later.

By 2025, more than half of the U.S.’s eggs are expected to come from cage-free birds. That’ll be some 140 million hens jumping and gliding around cage-free aviaries—and, potentially, 105 million birds with broken keel bones.