In a Montana town, a record-breaking 103-degree swing in 24 hours

Loma's weather in January 1972 is a fascinating exemplar of sudden temperature spikes and drops. 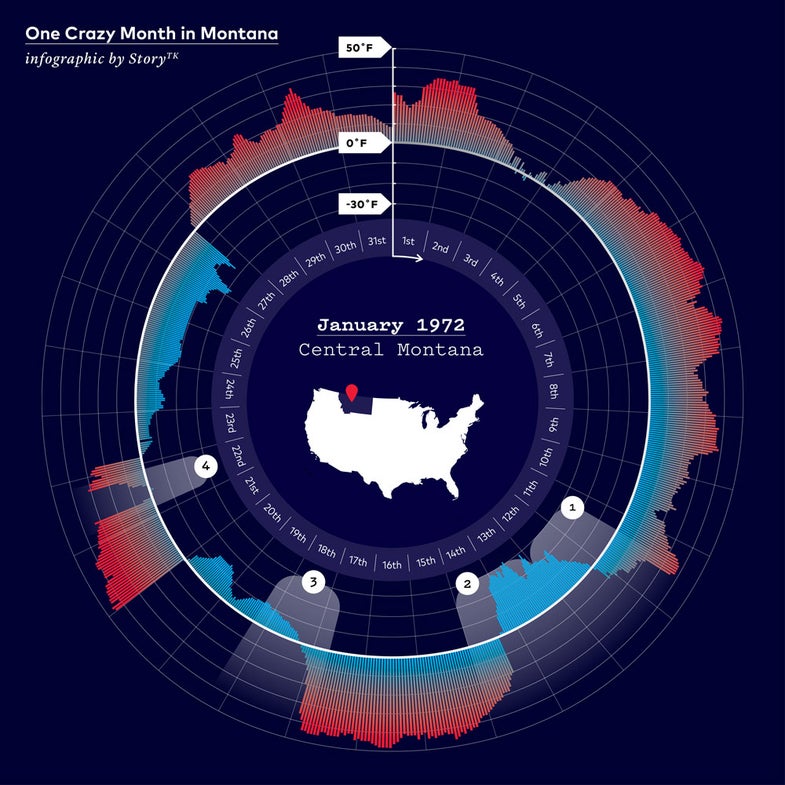 Talk about a swing state. Infographic by StoryTK
SHARE

IN MANY PARTS OF THE U.S., IT’S NOT UNCOMMON for a summery afternoon to transform into a below-zero night. But no place has felt a ­greater 24-hour change in the mercury than Loma, Montana. Between January 14 and 15, 1972, thermometers surged from -54 to 49 degrees Fahrenheit in a record-breaking 103-degree swing. In fact, that entire month in Loma and its nearest neighboring city, Great Falls, serves as an exemplar of the sudden temperature spikes and drops that can happen anywhere. The cause: dueling blasts of air.

An Arctic blast brought freezing conditions as it shouldered its way into Great Falls on January 11. These high-pressure gusts from the poles tend to bring clear skies, and the lack of an insulating cloud blanket lets temperatures drop even further at night. Any snow on the ground traps heat inside the earth, keeping the air frigid for longer.

A Chinook wind coming off the Rocky Mountains caused Loma’s record-setting leap. As warm, wet air tumbles down a mountain, the increasing atmospheric pressure heats the air, which is why these winds are sometimes called snow eaters; towns near the foothills can go from freezing to balmy in a matter of minutes or hours.

A cold air mass can quickly displace a warm one, as Montanans witnessed on the 18th. The denser, cool wall stays close to the ground as the front moves in, forcing the warm air to rise, and literally makin’ it rain if it holds enough moisture. These air masses bring lasting temperature changes because of their size; they can stretch across thousands of square miles.

At the boundary where two air masses meet, the temperatures on either side can differ by double digits. If pressure disparities make the boundary ripple from side to side, a town below can rapidly seesaw between warm and cold, as Great Falls did for about seven hours on January 22. The temperature tug-of-war can last for several days.