89 million years is the blink of a (geologic) eye. 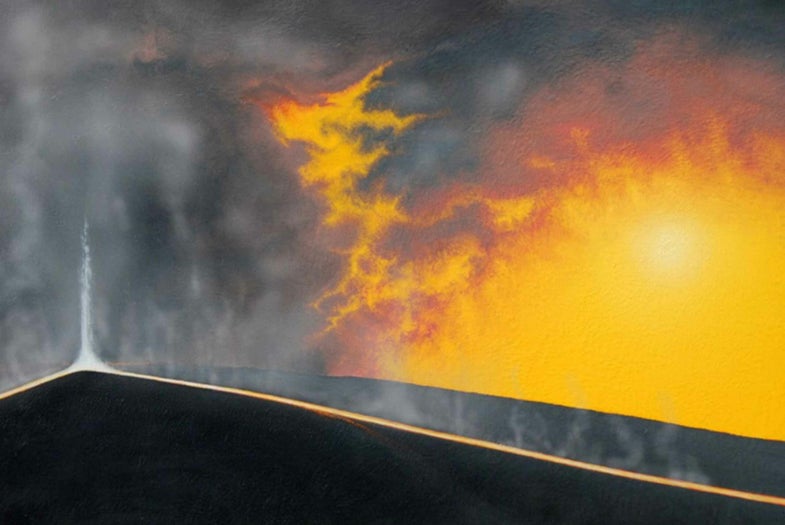 Between four billion and 2.5 billion years ago, the Earth’s interior was way hotter than it is today. The exterior wasn’t much better. Life had barely started to evolve, so the recently-formed land was devoid of plants or animals, nascent oceans were gradually being colonized by bacteria, the atmosphere had only limited amounts of oxygen, and some lava flows were so hot that they glowed white instead of red.

Welcome to the Archean, a time when Earth was still cooling down from the feverish high of formation. The heat from masses of rock and dust and gasses slamming into each other to form our planet was still dissipating. Added to that inferno was the heat from decaying radioactive elements. Back then, these white-hot eruptions of lava are believed to have been more common, and geologists still find plenty of these long-since cooled lava flows called komatiites that date back to before 2.5 billion years ago.

Now, it seems that in some places our planet has kept those superheated fires burning, producing komatiites in our much more recent past.

“These are very very young,” says study author Esteban Gazel. “In geologic terms, 89 million years ago is like it happened a second ago.”

Since the Archean, the Earth cooled down dramatically, chilling from the outside in within the cold vacuum of space. In most places, the temperature of the mantle (the layer of Earth right below the crust) is now a middling average of 2,462 degrees Fahrenheit. That’s practically chilly when you consider that komatiites could form from lavas with temperatures of over 3,000 degrees Fahrenheit.

The rocks in Costa Rica were formed by the Galapagos hotspot, an area where an unusual amount of heat makes its way from the interior of the Earth up to the surface. Other hotspots include Hawaii and Yellowstone. These spots are believed to be places where heat from much deeper in the Earth’s mantle (near the core) travels upwards, forming what geologists call a mantle plume. When it gets close to the surface, a mantle plume can melt parts of the Earth’s crust into molten rock, which we call magma while it’s still under the ground, and lava after it erupts.

The volcanoes of Hawaii offer a window into the interior conditions of the Earth, but these rocks from Costa Rica (called the Tortugal lavas) let us look even deeper into our planet. Based on the microscopic structures found in the minerals of the rock, Gazel and colleagues think that it started crystallizing into a solid at temperatures of about 2,912 degrees Fahrenheit, much hotter than the average temperatures seen in the exterior mantle today, and that it cooled out of melted rock that was even hotter, or 360 degrees fahrenheit above the hottest temperature of the mantle today.

They think the source of this heat might be somewhere deep under the Earth, near the boundary between our planet’s mantle and core, where temperatures more common to the Archean might still exist, far beneath our swiftly cooling surface.

“What is really fascinating about this study is that we show that the planet is still capable of producing lavas as hot as during the Archean time period,” Gazel said in a statement. “Based on our results from Tortugal lavas, we think that mantle plumes are ‘tapping’ a deep, hot region of the mantle that hasn’t cooled very much since the Archean. We think that this region is probably being sustained by heat from the crystallizing core of the planet.”

Gazel and colleagues plan to keep studying the more recent komatiites hoping to learn more about their origins. There is no reason to think that the vast, hot, extinction-causing lava flows that erupted in Earth’s past are imminent. But they did happen, and it looks like some of the driving mechanisms behind those eruptions–like the heat seen in these lavas–still persists today. Knowing more about how those eruptions occurred could help us keep an eye out for them in the future.