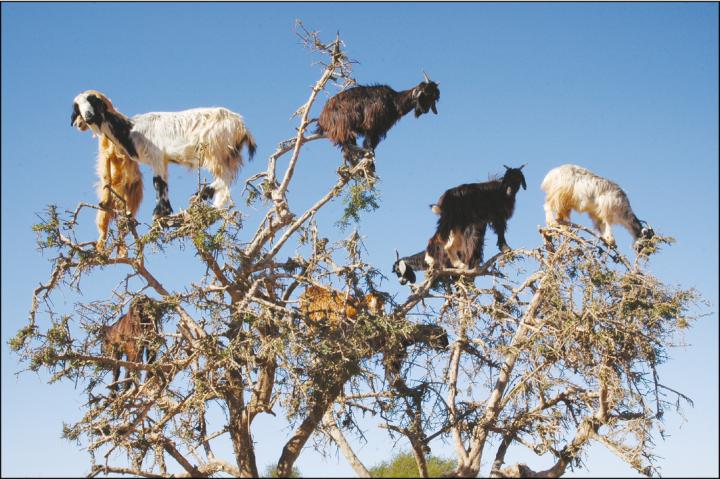 Goats climb mountains. Why wouldn’t they climb trees, too? But the sight of a herd of goats perched in a tree like a flock of birds is pretty startling.

It certainly was to biologists traveling through Morocco. “We were astonished to see between 10 and 20 goats regularly climbing thorny [26 to 32 ft tall] argan trees,” they wrote in a study published this month in Frontiers in Ecology and the Environment.

The goats in the area—encouraged by their human herders—were up there eating the small, pulpy fruit whose seeds are crushed to make argan oil, a popular hair treatment.

People tend to root around in manure to find argan seeds for oil extraction, because it’s thought that the digestive system of a goat makes them easier to crack. But the biologists knew that large seeds (like argan, which measures about 0.86 inches long to 0.59 inches wide) don’t often pass through a goat’s digestive system. So they decided to take a closer look into what the goats did with the seeds after eating the fruity flesh.

Herders reported that goats sometimes spat out seeds while chewing their cud—a behavior the researchers had also seen with goats eating olives and the fruit of the dwarf palm in Spain. Goats, like cows, are ruminants: animals that swallow their food, let it ferment in a stomach, and then puke it up to chew it again.

So while the seeds and manure are often found in the same place, it might not be just because the goats are helpfully digesting and then pooping out the precious seeds. It might also be that the goats do, in fact, poop where they eat, and the spat out seeds are getting mixed up with the manure.

To observe whether or not the goats were spitting the seeds or pooping them, the biologists fed goats fruits with different sized seeds. The seeds contained in the fruits ranged from the relatively large seeds of a dwarf palm fruit (0.64 inches by 0.43 inches) to the relatively small seeds of a hawthorn fruit (0.24 inches by 0.18 inches).

They found that while all the seeds in their study could be digested, defecated, or regurgitated and spat out, the larger seeds were more likely to be spat out.

While the eating habits of goats are a great thing to gross out your family with at dinner, the researchers were interested for a very different reason. The biologists found that over 71 percent of the seeds eaten by the goats were still viable.

That’s important because ruminants are found all over the world, and seeds can hang out in a ruminant’s digestive system for hours or days, often as the ruminant walks around. That means that these animals could be spreading seeds far and wide by spitting them out during their wanderings.

The researchers report that while finding seeds in ruminant poop had been widely studied, seeds traveling the other way out of the animal hasn’t gotten as much attention. While this is a preliminary study, they hope that other biologists will start looking into how widespread this behavior is, and how well it works at spreading seeds in other habitats around the world.