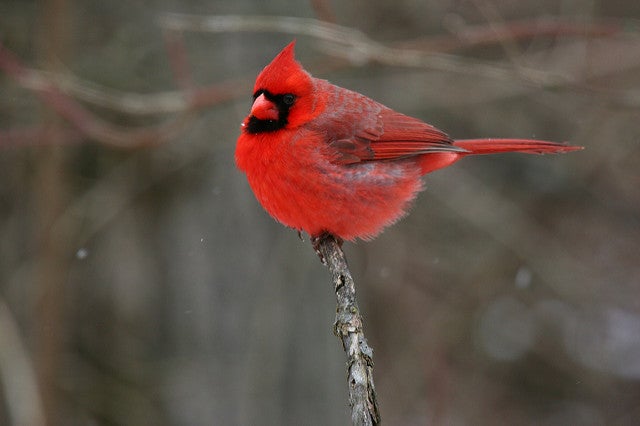 The residents of Atlanta may have a tiny, feathered protector against West Nile virus, a new study indicates. Each summer, cardinals take one for the team and draw mosquito bites that might otherwise go to American robins, which are very good at passing along the virus when bitten. By keeping West Nile virus away from these avian “superspreaders,” the beleaguered cardinals may tamp down transmission of the disease to people.

Since its arrival in the continental United States in 1999, West Nile virus has infected over 780,000 people. The virus is passed between bird hosts and mosquitoes, but sometimes spills over into humans via mosquito bites. When it does, the disease typically has few or no symptoms, although it can cause a fever, aches and pains or even dangerous brain inflammation.

To find out why, scientists surveyed the songbirds and mosquitoes of Atlanta over three years. Nearly one in three birds had evidence of the virus in their blood (compared with a mere 18.5 percent of Chicagoan birds). Many of these birds were northern cardinals, northern mockingbirds, brown thrashers and gray catbirds—species that are popular with mosquitoes, yet are poor hosts for the virus. These birds might be suppressing the spread of West Nile by drawing in infected mosquitoes yet failing to spread the virus on to subsequent diners.

Cardinals may deserve extra credit as “supersupressors.” When scientists traced mosquitoes’ blood meals back to which species the bugs had been dining on, cardinals represented the largest proportion.

During the early summer months, mosquitoes were particularly attracted to American robins. But in mid-July, the mosquitoes lost their appetite for robins and switched over, not to mammals, but to cardinals. This shift came shortly before August and September, which are prime months for West Nile virus infection.

The scientists aren’t sure why this happens, but it might offer some protection from the virus to Atlanta residents. “Cardinals, even though they can be infected with West Nile virus, are much less likely to have enough virus circulating in their blood to transmit the disease back to feeding mosquitoes,” coauthor Rebecca Levine, an epidemiologist and entomologist at the CDC, said in a statement.

Levine and her colleagues also examined different habitats, and saw that fewer birds carried West Nile virus in patches of old-growth forest. “We might find that keeping old growth forests intact, even in urban areas, can provide more than just an interesting piece of history,” she said.

The team published their findings August 8 in the American Journal of Tropical Medicine and Hygiene. In future, they want to figure out why Atlanta benefits from disease-suppressing cardinals, while robins spread the virus more in other cities.