Scientists tracked chickens and found they have their own daily routines, just like us 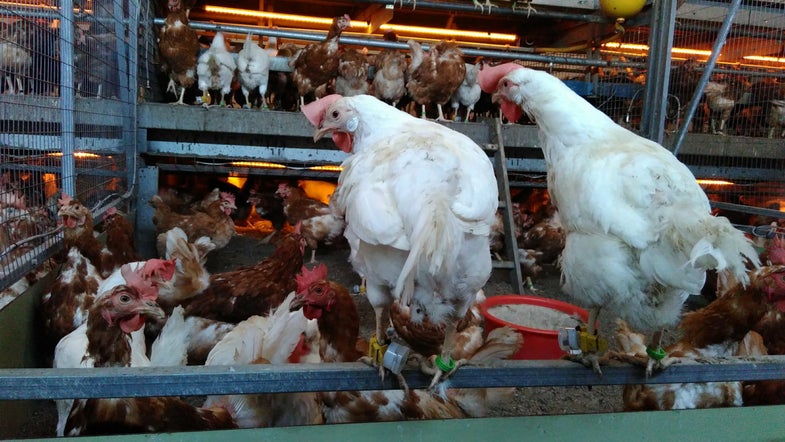 It looks like chaos inside a commercial aviary. In these cage-free barns, thousands of squawking chickens flap between perches, grabbing food on one level, rolling in dust on another, and laying eggs in the nesting areas.

Animal welfare researcher Michael Toscano is trying to make sense of the madness. He and his colleagues are tracking chickens as they move through these multi-level aviaries. The study is ongoing and the results haven’t been published yet, but what they’ve found so far has surprised them.

“You can go in the barn and it’s just 15,000 brown bobbing heads and they all look the same,” says Toscano, who is based at the University of Bern. But, peering a bit deeper, his research indicates that, at least for the chickens he’s tracking in smaller flocks, “Each one has a routine. Each bird is different, and they appear to be consistently different.”

Like you and me, each chicken seems to have its own daily schedule, and it sticks to it almost like clockwork. Toscano wants to learn more about these patterns, to try to tease out the factors that encourage healthy behaviors in laying hens. That could help egg producers as well as the chickens themselves.

The chicken tracking study, funded by two animal protection foundations as well as the Swiss government, started out as a way to study bone fractures, which are a widespread problem in cage-free farming. As the birds hop and flap around the aviary, they’re more likely to hurt themselves, for instance by crashing into the pen or other chickens. In mature flocks, up to 86 percent of the birds may have a broken keel bone—an extension of the breast bone where wing muscles attach. “If the birds have damage, how does it affect their mobility?” Toscano wondered.

At the same time, he and his colleagues noticed that within an aviary, there are some birds who choose to go outdoors all the time, and some who never go out. “If you visit one these large commercial flocks with access to outside, it looks great, but you go inside and see that most of the birds are inside—about 70 percent, or more in larger flocks,” says Toscano. “The farmers are doing everything they can, but the birds are deciding not to go outside. Why is that?”

The group’s preliminary studies suggested that chickens who went outside had healthier bones and lungs, and they may even be happier. Evidence suggests that when a rodent is happy, its brain’s hippocampus grows new neurons, whereas neurons tend to decrease in the hippocampi of chronically depressed rodents. Similarly, birds who regularly went outside had higher markers for neural growth.

By putting trackers on chickens, Toscano is hoping to learn which factors make them more or less likely to go outside, and how keel bone damage affects a bird’s mobility and egg production.

To get started, the researchers had to devise a way to tell each bird apart.

“Commercial aviaries are like cities,” says Toscano. “There can be anywhere from 500 to 300,000 birds in one aviary, and there’s no way to tell them apart, since they’re all similar in color and size.”

Farmers are able to track dairy cows easily. Because they’re so big, cattle can carry large battery-powered GPS units and accelerometers, so that a veterinarian is instantly alerted if a member of the herd is injured. But chickens are smaller and they live in more crowded conditions, so the team had to develop its own tracking technology.

One option was to use RFID trackers. These tiny tags don’t require batteries. Instead, when the chicken passes in front of an antenna, it recognizes the individualized chip tied around the chicken’s ankle, recording its identity, the time, and location on a computer. The only problem was that the radio wave-based system didn’t work well inside the aviary, which is mostly made of metal.

The other option, which ended up working better, was to use infrared beams. Beams in different zones of the aviary—say, feeding areas versus the perches where the birds sleep—are encoded with different signals. When a beam hits a receiver on the chicken’s ankle, it tells the tracker which zone the chicken is in, and at what time. The data get recorded on the ankle-worn device, and the researchers download it every 10 days or so.

The result is a graph that plots a chicken’s progress up and down the tiers of the aviary throughout the day. So far they’ve found that each bird’s daily routine is unique, and it follows the same schedule every day. “We didn’t not expect it to be so consistent that you could tell it’s a separate animal just from looking at the graphs,” says Toscano.

“Individual tracking of individuals within large groups is an important goal, but it has been difficult to get the technology, which promises so much, to actually work well in practice,” says Christine Nicol, an animal welfare researcher at the University of Bristol, who isn’t involved in the study. “It sounds like Mike [Toscano] has got a really neat recording system.”

Toscano and his crew have placed these trackers on 120 chickens, spread across six pens of 225 birds. They’ll track the birds’ location over six-day sessions at 11 different time points between 21 and 63 weeks of age. At each time point, they’ll take an x-ray of each bird. If its keel bone is broken, they’ll be able to compare the bird’s activity levels before and after the damage. The data can reveal how the injury affects mobility, and teach farmers how to recognize the signs of keel bone damage in their flocks.

By feeding the chickens pills with special dyes that change the yolk color of the eggs they produce, the study will keep track of how many each individual is laying, and how that’s impacted by mobility and keel bone damage. If the data shows that birds with broken keel bones don’t produce as many eggs, it would provide extra incentive for farmers to address this problem.

Eventually, Toscano hopes to scale up the experiment to see if the patterns hold in large, 15,000-bird flocks as well.

With the data deluge that’s coming from the trackers, Toscano’s team can also start to look for new patterns in the chaos. Do groups of birds tend to use the same tier often? (In other words, do chickens have friends?) And if one bird changes its pattern, does it affect the others?

“We know that when birds have damage, they move differently,” says Toscano. “But now it’s gotten so much bigger than that. There’s this whole other area of individual variation. Looking at those graphs, it definitely shows that you have a thinking animal.”

That might not be exactly what egg producers and consumers want to hear, even if it’s not entirely surprising.

“This research opens up a lot of difficult questions, but they’re the kinds of questions that need to be asked,” says Toscano. “If animals are going to provide us meat, milk, and eggs, then we have a responsibility to them to meet certain standards. We can look at what they want, and what makes them happy, and we should work hard to deliver it.”