These scientists made 2,879 tiny clay caterpillars and hid them all over the world 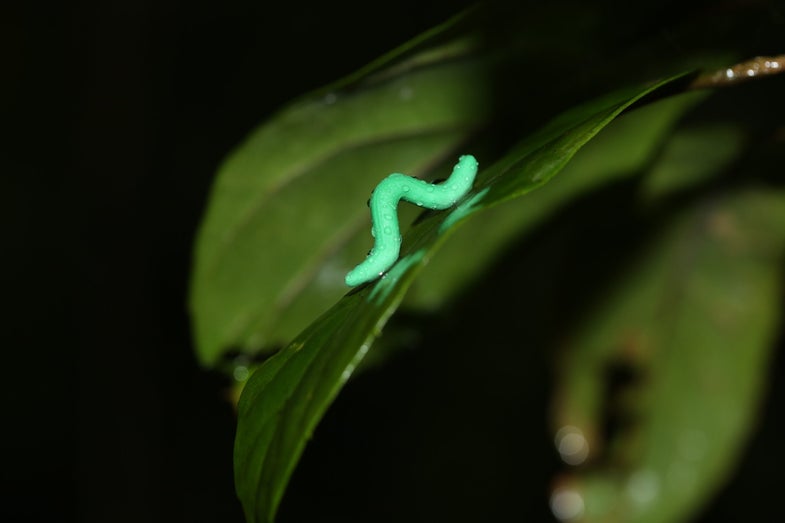 Humans aren’t the only creatures who flock to tropical areas. In general, biodiversity increases the closer you get to the equator. That’s somewhat obvious—just think how many more plants and animals live in the rainforest than in the Arctic. But what’s not obvious is how that latitudinal trend affects interactions between species.

In a new study published today in Science, researchers sought to find out whether predation rates go up as you move from the poles to the equator. So they made 2,879 clay caterpillars, and sent them around the world to see how many predators would bite.

In an international collaboration, researchers at 31 sites—ranging from the Arctic Circle to Australia—received the little green plasticine caterpillars in the mail and glued them to plants outdoors. The study spanned six continents, crossing 7,200 miles of latitude, and even mountainous elevations from 0 to 2100 meters above sea level. When animals attacked the fake bugs, their bite marks left imprints in the clay, allowing researchers to estimate the predation rates of different types of creatures across the globe.

Lead author Tomas Roslin, an ecologist at the Swedish University of Agricultural Sciences, says they chose to model the bait after “looper” or “inchworm” caterpillars because they’re so pervasive. “Geometer moths are among the largest families in the animal kingdom, with some 23,000 currently described species,” he says. “Anywhere you go, some of the local species will have green caterpillars.”

Craig Benkman, an evolutionary ecologist at the University of Wyoming who wasn’t involved in the study, praised its methodology. Unlike previous analyses, which had to rely on inconsistent data sets from lots of different studies, Roslin’s team used standardized techniques over a huge latitudinal gradient. This type of study “is exceedingly valuable,” says Benkman.

Mountains showed a similar pattern. For every 100 meter increase in height above sea level, a caterpillar’s risk of predation decreased by 6.6 percent.

But what’s most surprising is what’s driving the increased predation at the equator. It’s not birds or mammals, it’s bugs. Bird and mammal attacks didn’t really change with latitude. But for every one degree difference in latitude, predation by arthropods decreased by 3.5 percent. And for every 100 meters above sea level, arthropod attacks decreased by 9.6 percent.

As for why that happens, “we don’t strictly know,” says Roslin. The team hypothesizes that migratory birds can redistribute themselves to seek out food, whereas insects aren’t as far-ranging. Instead, because they’re ectotherms, warm equatorial weather makes them more active.

“Their data suggest that bird migration could be so effective that it equalizes predation rates on prey at a global scale,” says Benkman. “That is a remarkable result worth further testing, especially given the decline and vulnerability of so many migratory species.”

However, Benkman points out that the lack of a relationship for mammals remains perplexing, since they can’t migrate as easily as birds can. “I don’t think the lack of pattern for mammals can be explained away so easily,” he says.

Clearly, there’s still a lot to learn about these large scale patterns in interactions. The study authors are hopeful that, with their unique methodology and globe-spanning collaboration, they can soon start to take a bite out of more of these mysteries.