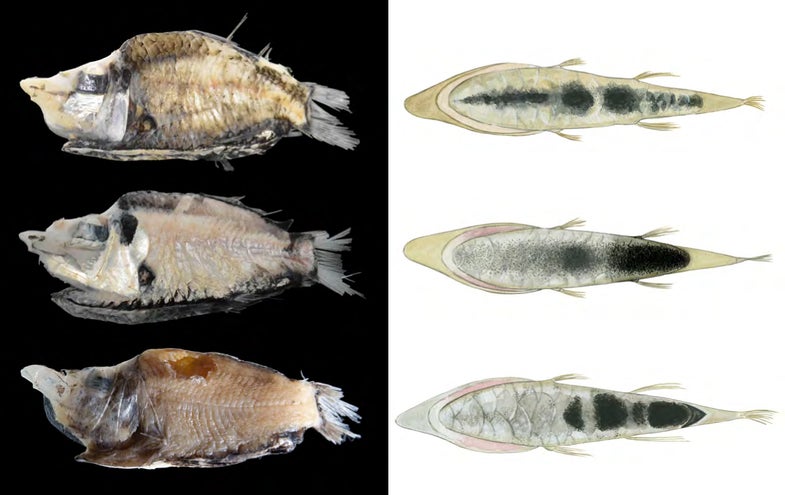 Scientists have discovered two new species of pop-eyed, bioluminescent fish in depths of the Pacific Ocean. The fish bear unique pigment patterns on their bellies, and until now were thought to be variations of the same species in preserved specimens.

The new fish belong to the barreleye family (Opisthoproctidae), which the scientists describe as “one of the most peculiar looking and unknown deep-sea fish groups.” Named for their large, tube-shaped eyes, these fish are both rare and fragile, making them difficult to study. Previously, the family was thought to have 19 members.

In the new study, scientists observed three distinctive pigmentation patterns on the fishes’ bellies. One belonged to a previously identified species found in the Atlantic Ocean. But a DNA analysis indicates that the two other patterns, found in specimens collected from the Pacific Ocean, actually mark distinct species.

These pigment patterns determine the light patterns that shine out from the fishes’ rectal bulbs. It’s thought that barreleyes use these patterns as a form of camouflage from predators swimming beneath them. By producing light, the fish conceal their silhouette, which would otherwise be highlighted by the small amounts of sunlight that reach thousands of feet below the ocean’s surface.

The scientists speculate that barreleyes also use their distinctive pigment patterns to communicate and recognize fellow members of their species.

One of the newcomers, Monacoa niger, has a black streak daubed on its belly; for its common name, the scientists suggest black mirrorbelly. The other, Monacoa griseus, has a greyish patch on its belly lacking distinctive markings. The scientists propose calling members of this species grey mirrorbellies.

The formalin and alcohol used to preserve older specimens seemed to discolor their markings, making identification more difficult. Standard preservation methods may have concealed the diversity of this fish family for nearly 100 years, the scientists concluded today in the journal PLOS ONE. There may be even more fish species mistaken for closely related relatives, still waiting to be identified.