For The First Time, Visible Light From An Exoplanet Detected 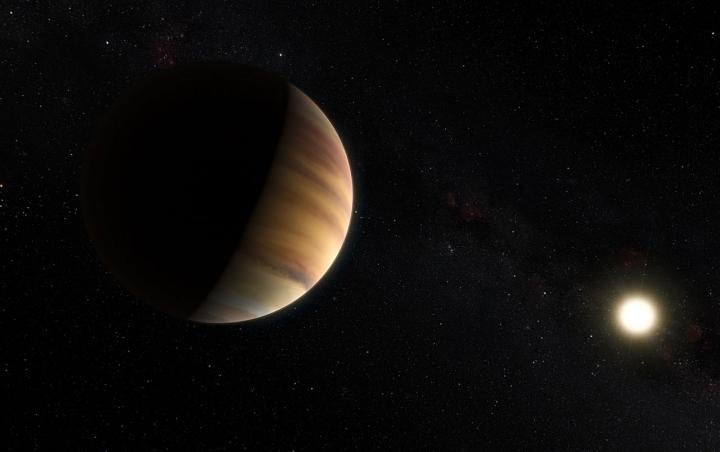 One does not simply look at an exoplanet. In order to learn more about these space rocks lurking many light years away, researchers have various indirect methods for deciphering their features. Astronomers can examine how the planet’s host star wobbles in relation to the globe, to pinpoint the planet’s position and mass. Or they can examine the dimming of the star as the planet passes in front, a method known as transit photometry that helps to determine the planet’s radius.

But we can’t ever just see an exoplanet in action. Because these rocks are so small and so far away, the light from their host stars completely drown them out. “Imagine you have a lamppost down the road a few 100 meters away, and you have a small moth flying around it,” Jorge Martins, a PhD student at the Institute of Astrophysics and Space Sciences in Chile, tells Popular Science. “It’s like trying to see the moth.”

Despite this trickiness, Martins and his research team have come pretty close to getting a good view of these exoplanets. In a study published in Astronomy & Astrophysics, the researchers were able to measure the visible starlight reflecting off of an exoplanet’s surface for the first time.

The planet examined in the study, 51 Pegasi b, is actually somewhat famous; in 1995 it was the first confirmed exoplanet to be discovered orbiting around a star quite similar to our own Sun. But at 50 light years away, we still have no conception of the planet’s appearance.

Using the HARPS instrument on the ESO 3.6-meter telescope at the La Sille Observatory, the researchers examined the unique spectrum of visible light coming from the star system of 51 Pegasi. They then detected a much fainter copy of this light spectrum, realizing that this signature was the light reflected off of 51 Pegasi b. “It’s like 10,000 times fainter than the light of the star,” Martin explains. By removing the star’s light spectrum and other various sources of noise, the team can isolate just the light bouncing off the exoplanet.

Martin noted that this was a proof-of-concept study to show the technique can be done. But in the future, measuring the visible light reflected off of a planet can be used in conjunction with existing exoplanet measuring techniques to glean even more valuable information about distant space rocks.

“By adding another technique to the arsenal, we get extra information to characterize the planet further. That technique will help in the future to get more data,” says Martin. “For example, we can obtain the reflectivity of the planet, and from that we can infer, for instance, if a planet can or cannot have clouds because of the amount of light it can reflect.”