Cassini arrived in Saturn’s neighborhood in 2004 for a four-year mission, but it performed so well and remained in such... 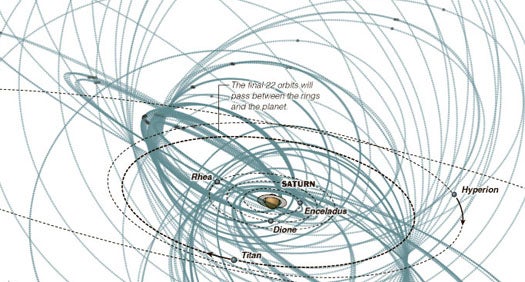 Cassini arrived in Saturn’s neighborhood in 2004 for a four-year mission, but it performed so well and remained in such good shape, its mission was extended for two more years. In that time it’s made countless discoveries, generated a wealth of scientific data and spawned well over 1,000 academic papers. It’s also burned three quarters of its fuel.

For the NASA Jet Propulsion Lab mission designers tasked with extending Cassini’s mission for an extra seven years, the project became a convoluted whirl of math and politics. Here, The New York Times explains the orbital mechanics of the new Cassini mission, which has to more than double the length of the mission using just a quarter of the craft’s original propellant, all while appeasing opposing scientific interests.

It makes for a complicated equation, to say the very least.

But during the last six years, mission planners had so much practice mapping out Cassini’s trajectory in the most efficient ways possible that they think they can extend the mission another seven years even though only 22 percent of the original propellant is left in Cassini’s tanks.

In what the Times calls “an astonishingly complex exercise in Keplerian physics and geometry,” mission designers balanced the push and pull of various research interests, Cassini’s capabilities and laws of physics to map out seven years worth of loops around Saturn and its moons, pulling gravity assist maneuvers around the ringed planet and its largest moon Titan to extend the mission.

After the new mission gets underway in September of this year, Cassini will make 12 passes at Enceladus, 5 at other large moons, 56 flybys of Titan and 155 orbits of Saturn at various angles before crashing spectacularly into the planet in 2017. But a lot has to happen between now and then; check out the Times piece for the whole story.