How Do We Tell The Difference Between Male And Female Faces?

Scientists pinpoint the neurons behind facial recognition—in monkeys, at least 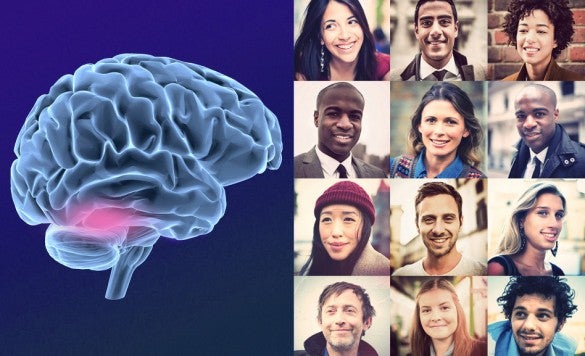 Humans, like other primates, aren’t born with the ability to discriminate between faces–it takes time for the brain to develop enough to do so. Though researchers have long hypothesized that the inferior temporal cortex, which processes visual stimuli, was also where the brain distinguished faces, they didn’t have any proof. Now, researchers from MIT have identified the neurons in macaque monkeys that help them identify whether a human face is male or female.

For the study, which was published in PNAS, the researchers trained two macaques to accurately tell the difference between male and female faces. When the monkeys were shown an image of a face on a screen, they would look at the top of the screen if the face was female, and the bottom of the screen if the face was male. Using electrodes to measure brain activity, the researchers pinpointed the parts of the brain that were the most active during the exercise, which were in the inferior temporal cortex. Then, they surgically implanted optrodes, which shine a little light inside the monkeys’ brains, and injected them with a virus that delivers a protein that inhibits the neuron’s activity when light is shined on it. A month later, they had the monkeys perform the facial identifying task both with the optrodes turned on and off. They found that when those particular neurons weren’t allowed to fire, the monkeys performed worse on the test. To the researchers, this was clear evidence that these particular neurons were essential in the facial discrimination task.

Since the structure of the inferior temporal cortex is the same in macaques and in humans, the researchers hope that this work will help scientists pinpoint which neurons affect particular behaviors in humans, and could help create more effective treatments for conditions where the brain’s internal communication lapses, such as epilepsy.