Staring at distant, faint objects to study the origins of the universe requires several layers of engineering skill and design... 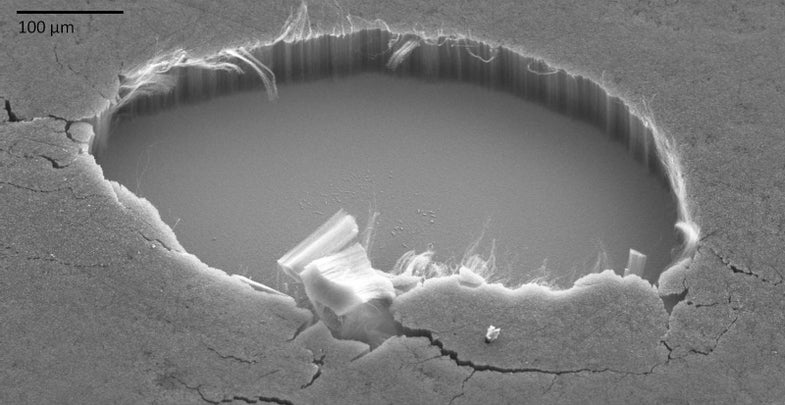 Staring at distant, faint objects to study the origins of the universe requires several layers of engineering skill and design trickery. The people at NASA are no strangers to this, having invented all sorts of new materials to improve telescopes and other observational tools. A new design may be one of their best examples yet: A blacker-than-black nanomaterial that absorbs pretty much all of the light that hits it.

The new material is made of carbon nanotubes and can be grown on a variety of space-friendly substrates, from silicon to titanium to stainless steel. This finely tuned fuligin absorbs an average 99 percent of all the ultraviolet, visible, infrared, and far-infrared light that hits it. It’s about 99.5 percent for UV and visible, and 98 percent for the longer bands.

It works by collecting and trapping light inside tiny gaps between the nanotubes, which are arranged in vertical fibrous strands like a tall shag carpet. This light would otherwise reflect off the surface and bounce around, creating noise.

We have seen other nanomaterials and metamaterials that can absorb nearly all light in some wavelengths, like infrared and visible, but these require special fabrication processes to work in whichever wavelength researchers want. This one is special because it absorbs nearly all light in nearly all wavelengths. “Our material is darn near perfect across multiple wavelength bands, from the ultraviolet to the far infrared,” said project leader John Hagopian at NASA’s Goddard Space Flight Center.

This is much more efficient and effective than black paint, according to NASA. Black paint only absorbs about 90 percent of the light that hits it, and it’s even worse in the cold dark of space, where black paint takes on a silvery hue. The best part may be this new material’s ability to dissipate heat — the blacker the material, the more heat it radiates away, so this could be used to remove heat from infrared-sensing instruments on projects like the James Webb Space Telescope. It could also help scientists examine small spots in high-contrast areas, like planets orbiting other stars, and even look at the Earth, where weak light signals of interest to atmospheric scientists are washed out by the atmosphere’s reflectivity.

Goddard scientists presented their work at a recent SPIE Optics and Photonics conference and are now studying how it can be used to calibrate deep-space-observing instruments.