With scorching temperatures day and night, WASP-43b ain’t no place to live. 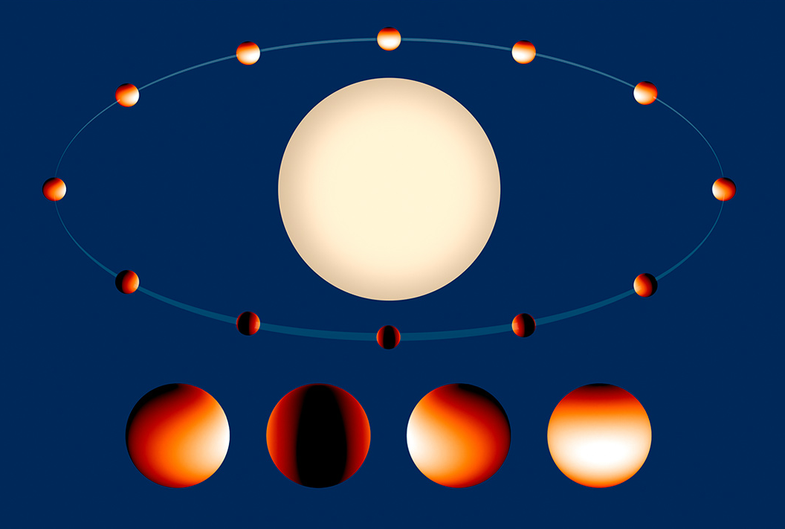 About 260 light years away from Earth, there is a wild exoplanet about the size of Jupiter — but with double its mass. Known as WASP-43b, this huge planet orbits its host star, an orange dwarf, in just 19 short hours, meaning its “years” are shorter than Earth’s days.

Oh, did we mention it’s unbelievably hot? Just like the Moon, WASP-43b is tidally locked to its parent star, so one side of the planet is in perpetual light while the other side remains dark. On the day side, temperatures reach about 1,500 degrees Celsius (around 2,700 degrees Fahrenheit), which is hot enough to melt iron. The night side temperatures aren’t much better, reaching about 500 degrees Celsius (about 900 degrees Fahrenheit).

Well now, a team of researchers is learning even more about the crazy conditions on WASP-43b, providing vital clues as to how such a planet could have formed in the first place. Using the Hubble Space Telescope and two different forms of spectroscopy, the scientists have made detailed maps of the planet’s weather, as well as the amount of water in its atmosphere. They published their findings in two different studies in The Astrophysical Journal Letters.

Spectroscopy is an oft-used method for studying distant planets. It involves dissecting an object’s light into its component colors, revealing a lot about the object’s temperature, mass, water composition, and more.

n the first study, the researchers used a technique called transmission spectroscopy, in which they studied light from the orange dwarf as it filtered through WASP-43b’s atmosphere. By analyzing this light, they were able to figure out the amount of water in the planet’s atmosphere in the regions bordering the day and night hemispheres.

A technique known as emission spectroscopy was utilized for the second study, allowing the researchers to map the planet’s atmosphere at different longitudes. Using Hubble’s very precise instruments, they were able to subtract more than 99.95 percent of light from the host star, which enabled them to study light that was coming just from WASP-43b. They did this as the planet orbited the star, mapping the water abundance and element composition of the atmosphere at various longitudes along the way.

According to the researchers, all of the water in the planet’s atmosphere is vaporized. On Jupiter, water is condensed into icy clouds, but space probes have been unable to penetrate Jupiter’s atmosphere, so not much is known about its water abundance. Additionally, most of the water on the other planets in our solar system are trapped away as ice, making it difficult to study. Since all of WASP-43b’s water is in gas form, it’s much easier for researchers to measure.

Water is believed to play an important role in the formation of giant planets, and knowing the dispersion of water in WASP-43b’s atmosphere reveals a lot about how it formed. Many astronomers believe that asteroid-like bodies crash into these planets long ago when the planets were still quite young, delivering water and other molecules that we observe today.