Japan’s IKAROS spacecraft is still solar sailing its way across the solar system in a proof of concept experiment that... 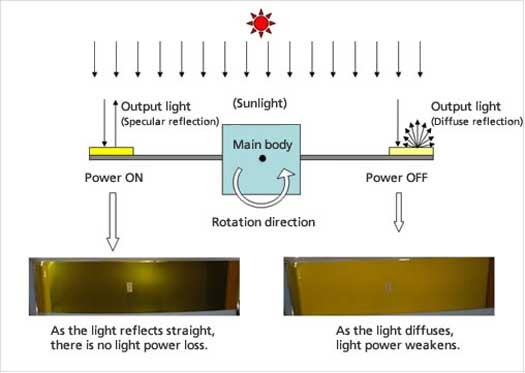 Japan’s IKAROS spacecraft is still solar sailing its way across the solar system in a proof of concept experiment that has gone, by all outward appearances, extremely well thus far. Marking another milestone for the mission, JAXA (Japan’s space agency) announced earlier this week the completion of another successful experiment as IKAROS executed attitude control using thin LCD panel devices built into the edges of its membrane-like solar sail.

One thing that may go unnoticed when you look at static images of IKAROS is that the sail rotates as the spacecraft glides along, collecting photons from sunlight as it goes to keep its forward momentum. IKAROS usually corrects its attitude via onboard thrusters attached to its main body, but if long-term space sailing is to become reality mission handlers need a way to create a disparity between the thrust on one part of the sail’s surface versus the rest of the sail.

To do this, JAXA researchers built eight blocks of thin liquid crystal panels into the edges of the solar sail, two on each edge. The panels are designed to be operated independently, so the LCDs can be activated on any part of the sail while on other parts they remain off. When activated, the LCDs reflect the incoming photons straight back, producing increased forward thrust; when deactivated, the incoming light is diffused, decreasing pressure on that portion of the sail.

In this way, mission controllers can keep sunlight pressure on a certain fixed spot by activating and deactivating LCDs even as the sail spins, causing a gradual shift in the craft’s attitude. The experiment continues, but for now it seems that JAXA engineers have figured out how to control the direction of a solar sailing spacecraft without using up precious propellant. That brings us one step closer to serious deep space travel beyond the boundaries imposed on conventional spacecraft by their limited fuel capacities.