This year marks the 45th anniversary of the Apollo 13 mission. Last weekend, I went to the anniversary celebration at... 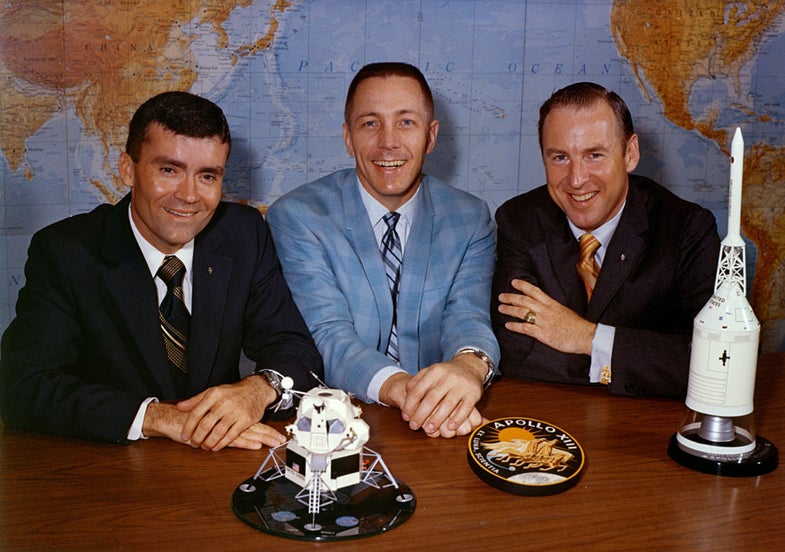 This year marks the 45th anniversary of the Apollo 13 mission. Last weekend, I went to the anniversary celebration at the San Diego Air and Space Museum. And it was sort of incredible.

I’ve met a number of Apollo-era astronauts and flight directors at past events like Spacefest and Astronaut Scholarship Foundation shows, but two men I’d never met were Apollo 13 commander Jim Lovell and Flight Director Gene Kranz, so going in I was pretty excited they they were both confirmed guests. 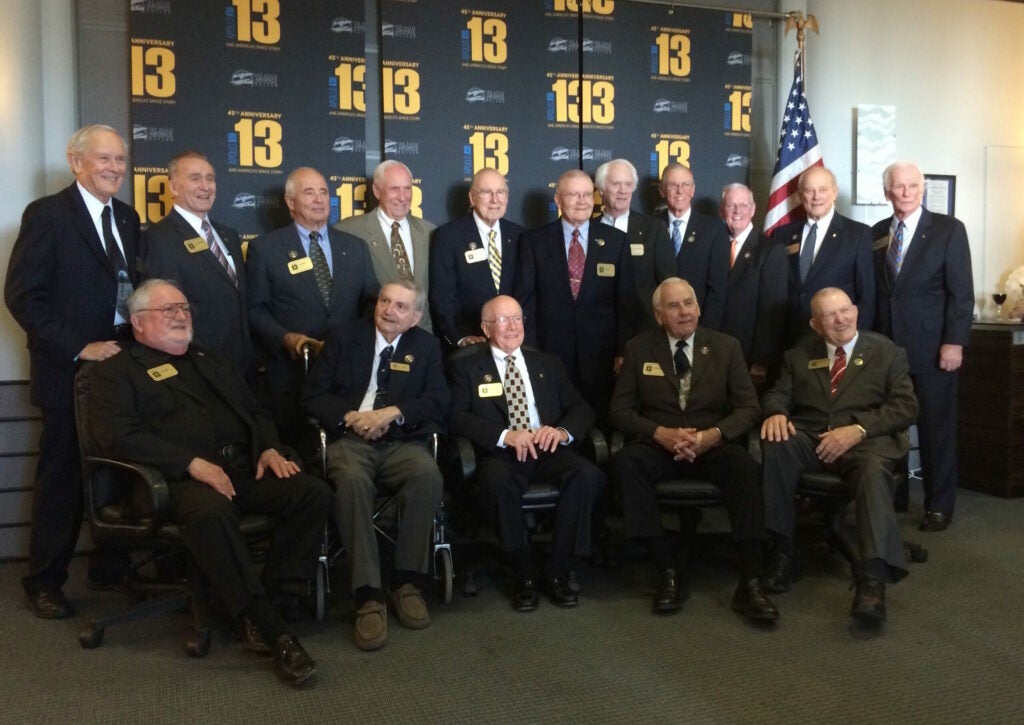 Though best known as the commander of Apollo 13, Lovell flew two Gemini missions. His first was Gemini 7 in December of 1965, a twelve day endurance test that would prove the astronauts were up to two weeks in space, the average time for a mission to the Moon. I asked Lovell what the worst part of the mission was. He said the flight was basically just two weeks in a latrine, and, chuckling, adding, “We got by.” The Gemini spacecraft allowed the crew about as much room as the front seat of a small car. Lovell said the only way he — or anyone for that matter — could survive any length of time in that spacecraft was the microgravity environment that allowed them to use its full volume. But still, he and Frank Borman were crossing off the days on a little calendar throughout the flight. On the plus side, they had a brilliant view of the Earth and plenty of time to look out the windows, which was nothing short of incredible.

Lovell flew with Borman twice, first on Gemini 7 and again on Apollo 8, the first mission to go into orbit around the Moon. When asked about the crew assignment, Lovell said he and Borman were probably paired by rotation. And really, he said, if you want to fly in space, you make yourself compatible with whoever you’re assigned to fly with.

Apollo 8 was one moment I wanted to ask Lovell about, and specifically, how different the impact of the Moon was seeing the first time compared to the second time. He told me that seeing the Moon up close didn’t have the biggest impact on him, it was seeing the Earth from the Moon. Nothing, he said, makes you feel so insignificant. 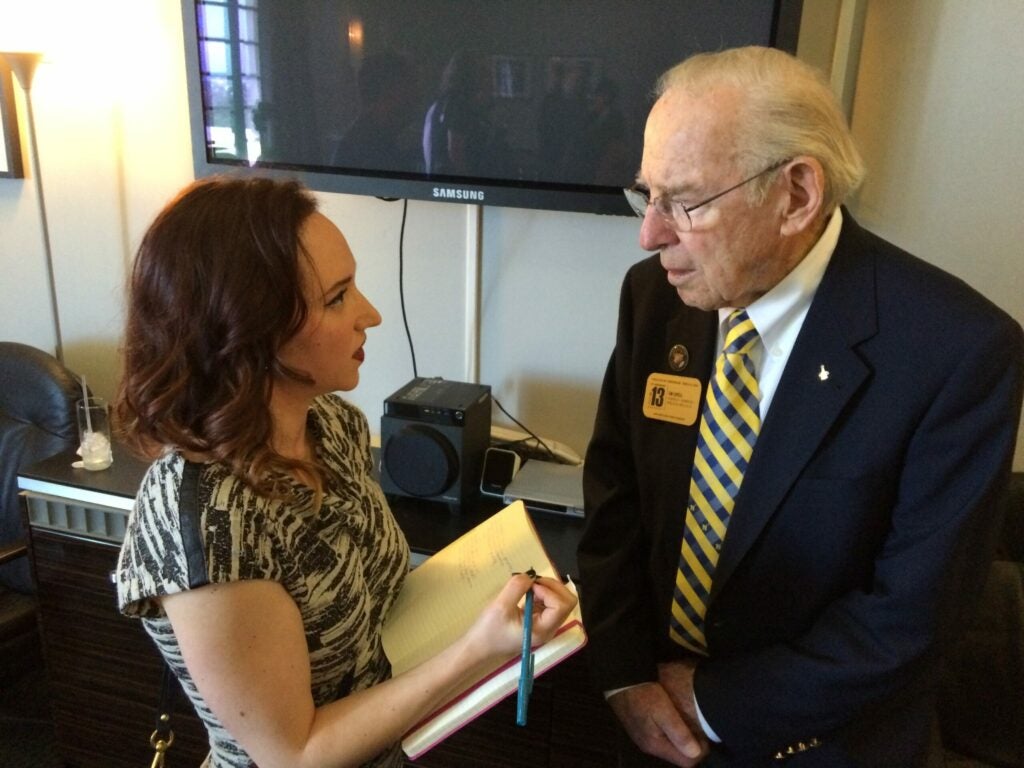 Me and Jim Lovell

I also asked about his other assignments during the Apollo program; each astronaut was assigned one system to work on that they got to know intimately. Lovell was assigned to landing systems, which prompted me to ask whether he had any thoughts on my favourite landing system, the Gemini Rogallo paraglider wing. His reply was a simple “thank god we didn’t go through with that!” As for the two-day buoyancy test, another in the weird landing saga that has always interested me, Lovell said that even as a Navy man he was pretty nauseous and uncomfortable between the swells and the smell during the test. The Apollo spacecraft wasn’t exactly a great boat.

During the cocktail hour before dinner, I got a chance to talk to Gene Kranz, which was pretty exciting. I asked him about how they trained for failures, which is something I’m always curious about — how do you train for something you’re figuring things out as you go along? He told me they typically tested for multiple system failures and the types of tests that would force hard decisions. One common test dealt with fuel rate loss, challenging the mission control team to decide last minute whether or not they would have enough fuel to return from orbit, forcing an ambiguous decision. And they made a lot of wrong decisions, killing a lot of imaginary astronauts.

But for every 15 or 20 simulations there was maybe one item that they would followup on, and these items and their solutions typically ended up in binders organized by mission phase that Kranz kept on hand during flights. And then he shared an interesting vignette. He used to put pictures of Sports Illustrated swimsuit models on the covers of those binders so if anyone found them they would immediately know who they belonged to. One day during a flight readiness meeting, everyone around a long table was craning to see who was on the cover of his binder, so he slid it down the length of a conference table, knocking everyone’s coffee into their laps in the process. In the 1980s, he said, political correctness caught up with him and he had to stop with the swimsuit models. 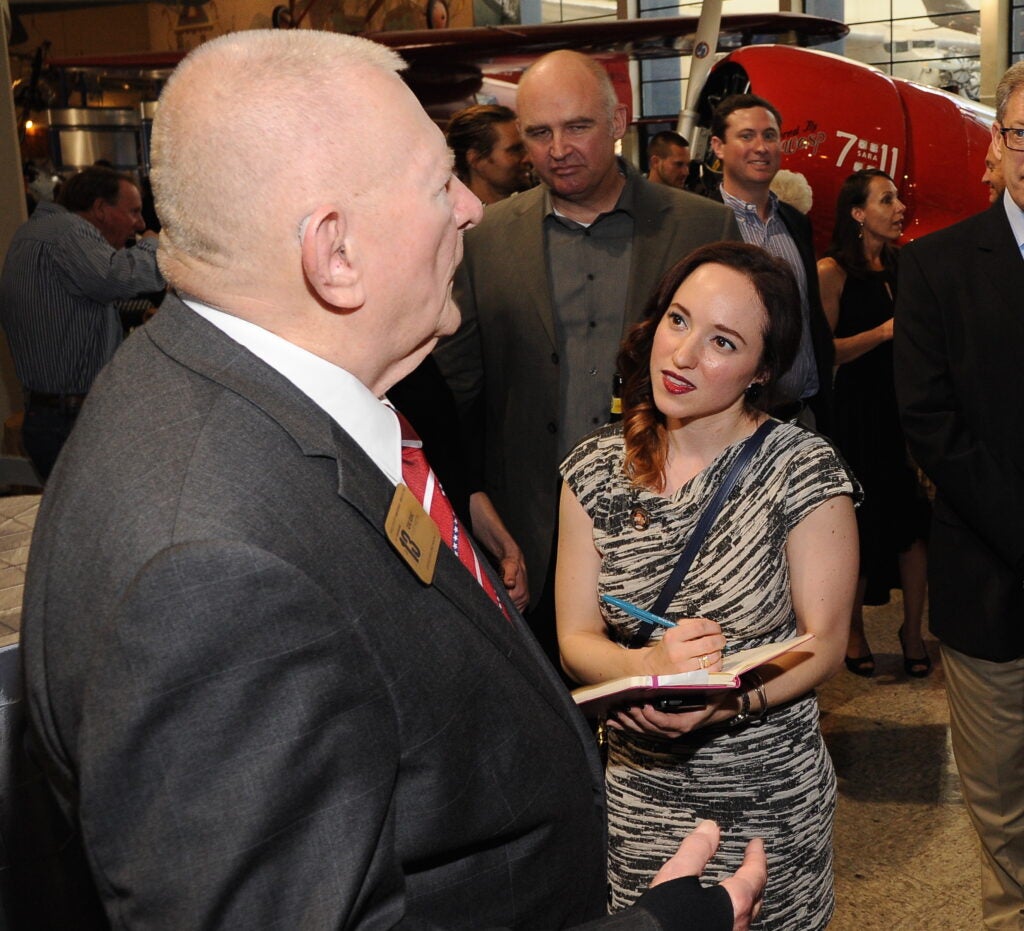 But of course, we were there to celebrate Apollo 13, and some really good insights came up during four panels that discussed the mission.

It took a while for everyone to figure out what had happened. The first thought Lovell had was that the Lunar Module, which thankfully they weren’t in, had been hit by a roving space rock. Fred Haise said that he knew within minutes that they wouldn’t be landing but had no idea that the mission would become life threatening.

Jack Lousma who was serving as Capcom at the time recalled that that Jack Swigert’s original call about a problem on board the spacecraft didn’t sound passionate enough, that the crew sounded so calm. For his part, Kranz assumed it was an electrical glitch, and for the first minute and a half after he assumed the team would put the crew to sleep then sort out the glitch during their reset period. Meanwhile, Glynn Lunney recalled that almost immediately the guys in the trench had five different return options worked out. Their first instinct was to turn the spacecraft around and bring the crew home.

Then, twelve minutes after the first call of a problem, Lovell saw that they were venting a gas — oxygen — into space and it changed everything. They were losing a consumable, and the venting threatened to throw off the spacecraft’s alignment. They thought to manually move guidance information from the Command Module into the Lunar Module to start using it as a lifeboat, a tedious but vital process that saved the mission.

The timing of the failure was a twist of fate; any other time in the mission and things would have played out very differently. And Lovell said that for him it was a lesson in leadership, that he could have dissolved into fear and curled up in a fetal position and waited for a miracle, but if he had he would still be up there waiting for that miracle.

And one really interesting insight Lunney recalled was that Administrator Tom Paine just asking the guys in mission control what he and NASA on the whole could do to help them. The administration had complete trust in the men in that room to get Apollo 13 home safely, which of course we know they did.

I’ll be doing another “live” tweet of Apollo 13 starting with launch at 1:13 in the afternoon central time. It’s going to be a good one with a lot of tweets, so be sure to follow me on Twitter as @astVintageSpace to relive the mission in real time!