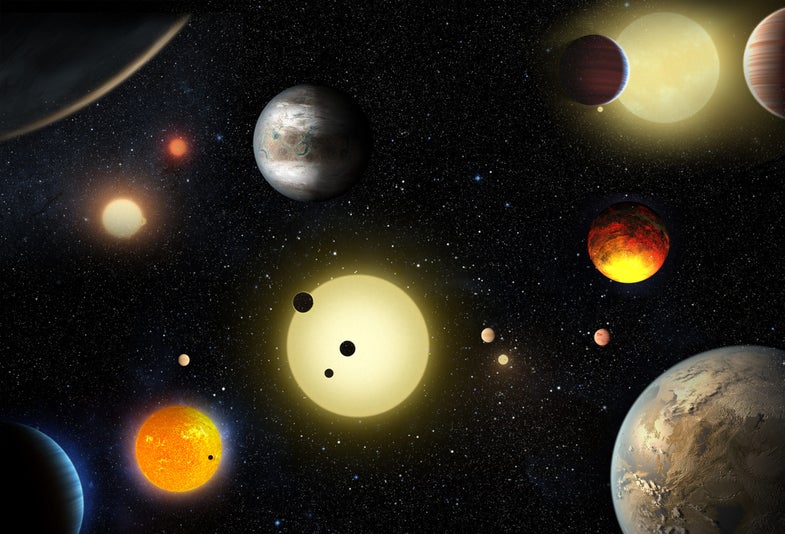 After sifting through the data from the Kepler space telescope, scientists have announced the largest-ever batch of new planets. 1,284 new planets will be joining the more than 1,000 exoplanets that Kepler had already discovered.

Between 2009 and 2013, the telescope stared up at a patch of stars in the sky, waiting for the star’s light to dim, indicating a planet was passing between the star and the telescope. The problem was that other objects, such as companion stars, could also create similar dips. So scientists on the ground had to sift through Kepler’s reams of data and follow up on each planet candidate using different telescopes to make sure they weren’t planetary imposters.

That process was slow, but today the Kepler team announced a new way to make the process faster and easier. The method, which they used to confirm today’s batch of 1,284 exoplanets, uses a statistical method to calculate the probability that any given candidate is a real planet. The method is said to be 99 percent accurate.

“Planet candidates can be thought of like bread crumbs,” said Timothy Morton, who developed the technique, during a press conference. “If you drop a few large crumbs on the floor, you can pick them up one by one. But, if you spill a whole bag of tiny crumbs, you’re going to need a broom. This statistical analysis is our broom.”

Most of the new planets, shown in orange, are thought to be much larger than Earth:

An additional 1,327 planet candidates are thought to be real planets, but scientists are less than 99 percent sure on those.

To date, Kepler has zeroed in on about three dozen planets and planet candidates in the habitable zone–the region around a star where it’s neither too hot nor too cold for liquid water to exist on the planet’s surface.

The team will announce the next and final batch of confirmed planets from the original Kepler mission this fall. The telescope, which suffered a reaction wheel failure in 2013 that destroyed its ability to stay pointed at one place, continues to search for planets, albeit less efficiently than before. “K2” has found about 46 confirmed planets so far.

As the Kepler mission draws to a close, exoplanet hunters are now looking forward to the Transiting Exoplanet Survey Satellite, which will search the entire sky for exoplanets using a method just like Kepler starting in 2017. The James Webb Space Telescope, slated to launch in 2018, may be able to tell us what’s inside the atmospheres of some of these exoplanets, and whether they might be home to something biological. Each takes us one step closer to answering the question: Are we alone in the universe?