As if there wasn’t enough excitement swirling around the discovery of a potentially habitable planet circling the star Gliese 581... 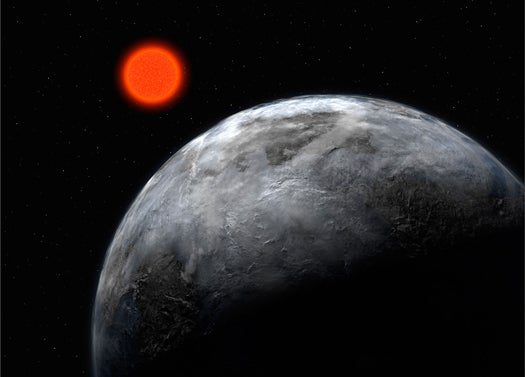 As if there wasn’t enough excitement swirling around the discovery of a potentially habitable planet circling the star Gliese 581 just 20 light years away, one of the scientists behind yesterday’s announcement upped the ante during a press briefing yesterday afternoon, declaring “my own personal feeling is that the chances of life on this planet are 100 percent.”

Steven Vogt, a professor of astronomy and astrophysics at UC Santa Cruz, said he had “almost no doubt” (which seems slightly different than 100 percent sure) that life exists on Gliese 581g, an exoplanet Vogt and colleagues discovered via the Keck Observatory that is orbiting in the “habitable zone” surrounding the red dwarf Gliese 581. The “habitable zone” — a term some scientists are loath to use given the many variables at play in planetary science — is the sweet spot that is neither too far or too close to the star such that surface water might exist there.

Vogt’s statement might make for a bold prediction — especially given the number of life-bearing planets we’ve found thus far — but his statement is more an endorsement for the persistence of life than a declaration that he’s found it elsewhere in the galaxy. “Personally, given the ubiquity and propensity of life to flourish wherever it can, I would say, my own personal feeling is that the chances of life on this planet are 100 percent,” Vogt said to reporters.

Meaning, even if there is life on the planet as Vogt seems to think there is, there’s no telling what kind of life it might be or whether it might be any degree of intelligent — though an Australian sky-watcher did pick up a mysterious radio signal from nearby Gliese 581e a couple of years ago. Just to be safe, we’d like to extend warmest greetings to our Gliesian readers.