Nurturing a Baby’s Microbiome, Before and After Birth

As humans, we’re more bug than person – 90% of the cells in our bodies are microbes – and those... 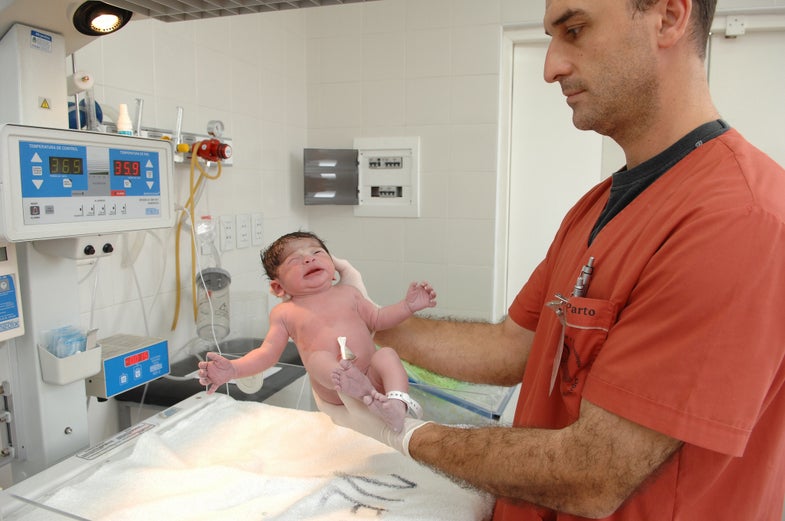 As humans, we’re more bug than person – 90% of the cells in our bodies are microbes – and those bacteria help create good immunity and lower risk for allergies, asthma and autoimmune diseases. It’s not surprising, then, that getting good bacteria right before and after birth is critical.

So how do babies start to get good bugs? Mostly from mom, in one form or another. Before birth, babies are basically sterile in the womb, but as soon as they pop out, bacteria start to colonize them.

Babies delivered vaginally are covered in a film of microbes as they pass through the birth canal. Included in the mix are bacteria that help babies digest their first meal. Babies delivered by cesarean section are colonized mainly by skin microbes from the hospital environment — a very different set of species.

Researchers have started looking into ways to effectively transfer mom’s bacteria – the kind a baby would get when squeezing through the birth canal – to babies born via C-section. In one study, doctors “incubated” gauze in a mother’s vagina for an hour, then wiped it on their mouth, face, and the rest of their body.

Maria Gloria Dominguez-Bello, an associate professor in the Human Microbiome Program at the NYU School of Medicine, should that the procedure doubled the number of bacteria that the C-section babies were exposed to. (Vaginal delivery still exposes the baby to six times as much bacteria). The results were presented last year at the meeting of the American Society for Microbiology.

Other scientists are diving into strategies to restore optimal microbiota before birth. Rodney Dietert, an immunotoxicologist at Cornell, said that in order to “seed and feed” a microbiome, certain probiotics can be given during pregnancy. “This may be important if the mother has microbial dysbiosis associated with one or more non-communicable diseases or conditions, such as obesity, diabetes, asthma,” he says. “Here probiotic administration could help to optimize her microbiome which she would then pass on to here baby.”

Breastfeeding also helps a baby’s microbiome settle into its optimal state. Babies who are breastfed have a more diverse gut bacteria population than their formula-fed friends.

Antibiotics can also send bacteria into disarray, when given at birth or after. A study out this week in the journal [Cell Host & Microbe](/Cell Host & Microbe ) found a three-way link among antibiotic use in infants, changes in the gut bacteria, and disease later in life. Imbalances in gut microbes have been tied to infectious diseases, allergies and other autoimmune disorders, and even obesity later in life.

Cornell’s Dietert says that getting a good ecosystem of bacteria is important in a world that is dominated by illness. “Seed and Feed is a preventative strategy that has the potential to help that baby avoid a life filled with ever-increasing drugs, hospital visits, and medical procedures,” he said.

The Microbiome and Sustainable Healthcare