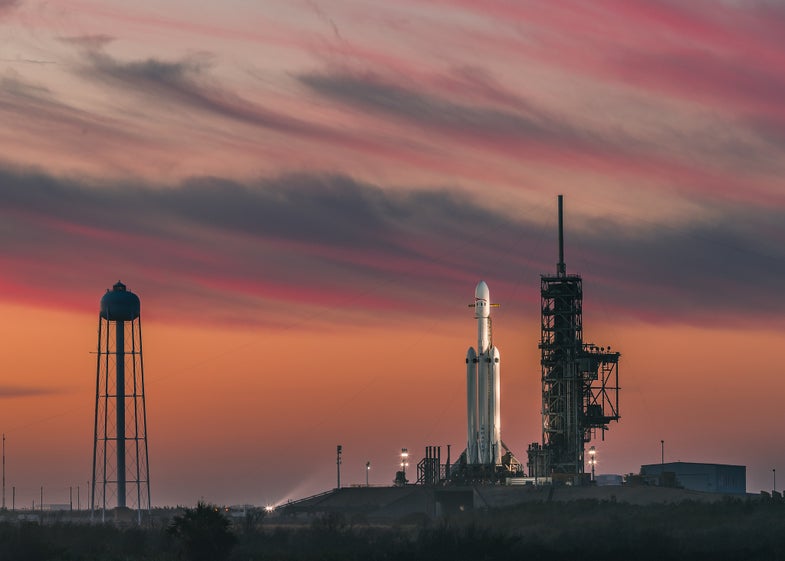 The Falcon Heavy waits on the launchpad before launch. SpaceX
SHARE

Patience was in short supply during the leg-jiggling, finger-tapping, tension-filled hours before the launch of the Falcon Heavy, which would, if successful, become the most powerful operational rocket on the planet. From thousands of miles away viewers obsessively checked Twitter for live updates from the hundreds of reporters and thousands of visitors who showed up to witness history.

The knotted insides of space enthusiasts clenched tighter as the launch slipped from 1:30 to 2:20, to 2:50, then 3:15. Fast-moving winds had stirred the blue skies and the upper atmosphere above the rocket sitting on launchpad 39A. The countdown clock stopped, along with the hearts of people who had been waiting seven years for this moment—when Elon Musk introduced the idea of the Falcon Heavy to the world in 2011.

On Tuesday afternoon, winds in the upper atmosphere were blowing at speeds 20 percent higher than the acceptable level for rockets of this kind to take off safely. Anxiety rose as time dribbled out of the 2.5 hour launch window. Then, the countdown clock restarted and a new launch time was set for 3:45.

They started fueling up, adding purified kerosene known as RP-1 to the rocket. Spirits and hopes rose once again as the engineers poured liquid oxygen into the Falcon Heavy, a vote of confidence that the rocket would actually take off as planned.

Hundreds of thousands of people tuned into the live webcast long before it went live, patiently awaiting the first glimpse of the Falcon Heavy. In the end, 2.3 million people tuned in to watch the big event.

Then, there it was, surrounded by a cloud of vented oxygen. The weather held. No technical errors arose. It was five minutes to launch, then 30 seconds, then, 10-9-8-7-6-5-4-3-2-1… flame and fire roared along with the crowd, and the most powerful rocket in operation today was on its way up, burning its path in the sky.

The scene was breathtaking, but could the rocket stick the landing? The Falcon Heavy approached the darkness at the edge of our atmosphere, and cheers arose once again as two Falcon cores on the sides broke cleanly away from the center core, pivoting back towards two landing pads on Cape Canaveral. Shortly afterwards, the last segment of the first stage separated, and headed back towards a drone ship. Landing the rockets carefully (instead of smashing them into the ocean) makes it more likely that they can be reused on another flight.

The two side cores were already veterans, having launched and landed in previous missions. They touched down in unison, a dramatic flourish to cap off a successful launch. It was, according to Popular Science gathered around their computers, “strangely beautiful,” and “like watching synchronized swimmers, but rockets.” In the words of the jubilant SpaceX flight engineer, “The Falcons have landed.”

The remaining Falcon, the center core, headed towards a drone ship just as the video feed of the landing cut off. Hours later, The Verge’s Loren Grush reported that two of the core’s three engines failed to fire, sending it into the sea just 300 feet from the drone ship at 300 miles per hour. The impact was enough to knock out two of the ship’s engines, and scatter shrapnel on the deck.

One other aspect of the launch went ever-so-slightly off: A cherry-red Tesla roadster (‘driven’ by a mannequin clad in a SpaceX-branded spacesuit) was meant to enter orbit around Mars. The spaceman is headed out into space, but he’s overshot his orbit and will instead go into the asteroid belt between Mars and Jupiter.

Starman won’t be totally alone. A tiny model of both the car and the astronaut are in tow, along with a plaque bearing the names of 6,000 SpaceX employees, and a disc specially designed to hold information even in the hostile environment in space. The data includes human knowledge, including famed science-fiction writer Isaac Asimov’s Foundation series.

For four hours after launch, SpaceX had a live stream of Starman available for people to watch the giant Tesla advertisement orbit Earth:

This was only a test run of the rocket, hence the publicity-seeking payload. But now we have an heir to the Saturn V rocket, which carried people to the Moon. The Falcon Heavy isn’t quite as powerful as the Saturn V, but it is operational. NASA discontinued the Saturn V in the 1970s. Since then, the world has gone without a heavy lifter. The Falcon Heavy will likely ferry satellites to space, like its smaller Falcon 9 siblings, but it has the potential to go further, pushing us—or at least our proxies—towards the Moon, or Mars, or farther.

There is no doubt that it is a heavyweight, but its reign might be short. Other rockets, including SpaceX’s own BFR system, a fully reusable two-part rocket and spaceship system, might soon displace it at the top, and ultimately might be the vessel that lands on Mars with earthlings inside.

But that’s all in the future. There will be schedule changes, budget changes, and payload changes, and it’s still unclear when humans will actually head to Mars, or back to the moon. This was an exhilarating, silly, and perhaps a bit ostentatious display of what humans can achieve. But it mostly shows how much more we have left to do: There are scientific missions to launch, human outposts to establish, and a whole universe of worlds to explore.

For now, we’re in a spot where we can take a deep breath, watch an empty space suit in a used sports car circle the Earth, and get ready for what comes next.

Update 2/7/18: This post has been updated with pictures of the launch and information about the fate of the center core, and the final trajectory of Starman.