SpaceX wants to send private citizens to the moon (again)

We all want to know who it is. 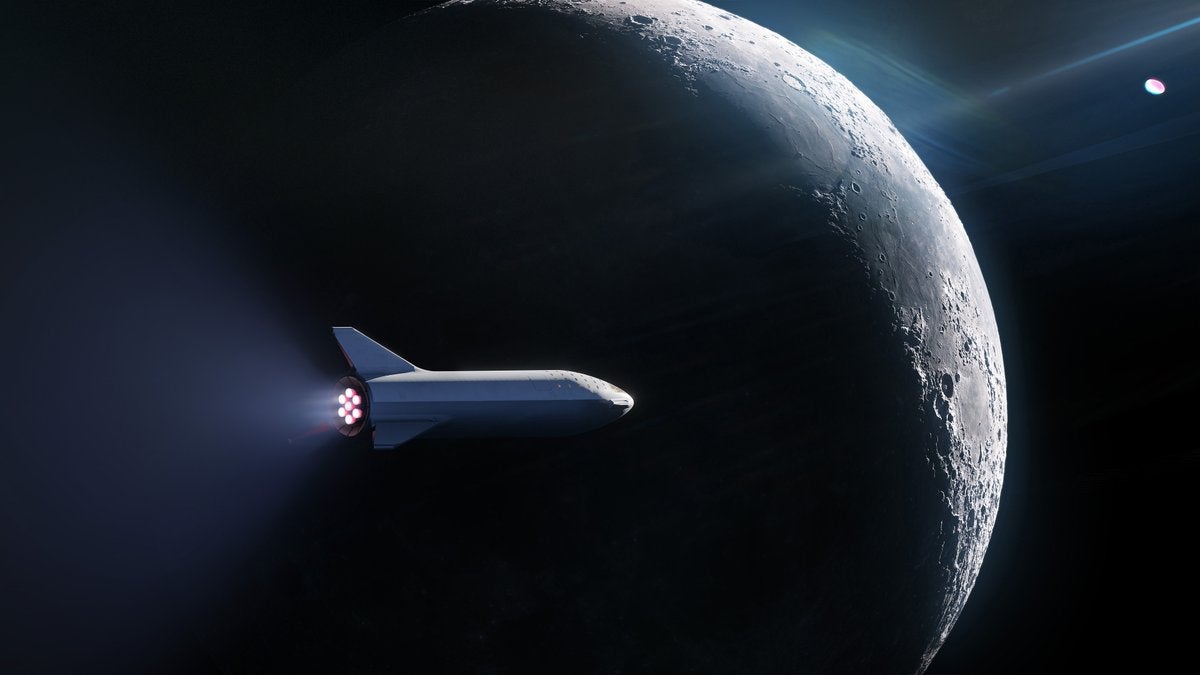 Tonight at 9 pm eastern time, the world will gain a first glance at the latest private citizen to hand over a load of cash in exchange for a promised rare trip into space and around the moon.

Private space company SpaceX plans to use its Big Falcon Rocket (BFR) to launch a spaceship (nicknamed the BFS) towards the moon, carrying a paying passenger on a trip around our closest satellite—a view that only 24 astronauts have ever seen in person.

SpaceX supplemented its announcement with new concept art of the BFR/BFS system which seems to have been tweaked from its original design with the newest iteration featuring three fins and seven engines to help make the lunar trip.

Wait, haven’t we heard this before?

If you think SpaceX sending someone to the moon sounds really familiar, you’re not imagining it.

In February 2017, SpaceX said it would send two people to the Moon by the end of 2018 on a Falcon Heavy rocket. The two anonymous individuals put down significant deposits. But that trip, as originally planned, hasn’t happened yet. And, it is highly unlikely to happen in quite the same way.

In September 2017, seven months after the announcement of the lunar plans, Musk announced the development of the BFR, and told reporters earlier this year that crewed missions on the Falcon Heavy were being tabled in favor of development of the BFR. (The smaller Falcon 9 rocket will still be used to launch NASA astronauts to the ISS in a Crew Dragon ship next spring.)

Since those customers remained anonymous, and SpaceX never provided further information, it’s impossible to know whether the company gave one of those individuals first dibs on the new trip.

Okay, so what do we know and what’s still uncertain?

The sparse SpaceX announcement on Twitter reads in part: “SpaceX has signed the world’s first private passenger to fly around the Moon aboard our BFR launch vehicle.” Replying to a tweet asking if he was the private customer in question, SpaceX CEO Elon Musk tweeted out an emoji of a Japanese flag; perhaps a clue or simply a red herring to ignite conversation about the announcement (just like this).

On the SpaceX webcast page the company calls the signing of a private citizen onto the planned mission “an important step toward enabling access for everyday people who dream of traveling to space.” Unlike the Apollo missions which could only accommodate three astronauts at a time, the BFS should be able to take many more (though specific numbers aren’t available yet). The ship will certainly need a trained crew to operate the vessel.

It’s not entirely clear how signing a single paying passenger will enable access for “everyday people” who might dream of venturing outside our planet’s atmosphere. Reusable rockets, like the ones that SpaceX has championed do reduce overall costs of spaceflight, but it reduces them from hundreds of millions of dollars per launch to tens of millions of dollars per launch. That’s certainly less expensive, and might make economic sense for a space agency like NASA, but it’s just not in the vacation budget of the overwhelming majority of people here on Earth.

A brief history of tourists in space

Of course, there are some people who have already paid for the privilege of going to space. Dennis Tito became the first space tourist to visit the ISS in 2001 securing a berth on the Soyuz with Russian company Space Adventures at a cost estimated at $20 million. Since his trip, six others have also flown to the ISS; Greg Olsen, Charles Simonyi, Anousheh Ansari, Richard Garriott, Guy Laliberté, and Mark Shuttleworth.

Neither SpaceX nor those seven citizens—plus the supposed future space-farer to be revealed tonight—are alone in their desires to turn space into a vacation destination. . Both Virgin Galactic and Blue Origin also working to get their clients up past the stratosphere with proposed missions that range from short hops along the edge of space to trips to still non-existent space stations. Virgin Galactic is selling tickets for rides on its Unity spacecraft, which the company claims will one day take day trips to space for the comparative bargain of $250,000. Currently, that idea is lofty; the spacecraft itself has yet to make it to space. Blue Origin, owned by Amazon CEO Jeff Bezos, will soon begin selling similar flights at a comparable price point but likewise, is not sending people past the wild blue yonder yet.

What’s so special about the moon?

Both Virgin Galactic and Blue Origin plan to offer suborbital flights —not high enough to orbit the Earth. And of the tourists that have actually flown in space, none has left low Earth orbit, the area of space that is easiest to get to where a spaceship (or space station like the ISS) can stay in orbit around the planet . The ISS is about 254 miles above Earth. The moon is 238,900 miles away. That’s a far more challenging trip.

The first crewed mission to circle the moon was Apollo 8 now 60 years ago in 1968. The three astronauts became the first people to see the moon’s far side, orbiting the celestial body 10 times during their six day trip.

The journey wasn’t without its downsides. The commander, astronaut Frank Borman became violently ill less than a day into the flight. Still, they were the first people to see our planet rising over the lunar surface, capturing the iconic sight on film on Christmas Eve, 1968.

The image, known as earthrise is credited with kickstarting the environmental movement. Without a doubt, anyone who signs up for the proposed SpaceX mission is hoping to experience the same stunning view.

Probably not anytime soon, definitely not before the end of this year, and probably not next year either. SpaceX is targeting next year for crewed missions, but those will involve NASA-trained astronauts headed to the ISS, not private citizens.

As Ars Technica space editor Eric Berger points out, it took seven years for the Falcon Heavy to go from announcement in 2011 to launch earlier this year. If it follows the same trajectory, the BFS, which was just redesigned, likely still needs to go through several years of testing before it carries passengers. (SpaceX’s NASA-funded Crew Dragon capsule is expected to launch to the space station next year after four years of testing). Berger pinpoints 2023 as the earliest launch date. What launch window SpaceX will aim for remains an open question.