Oh gosh, this is really happening. 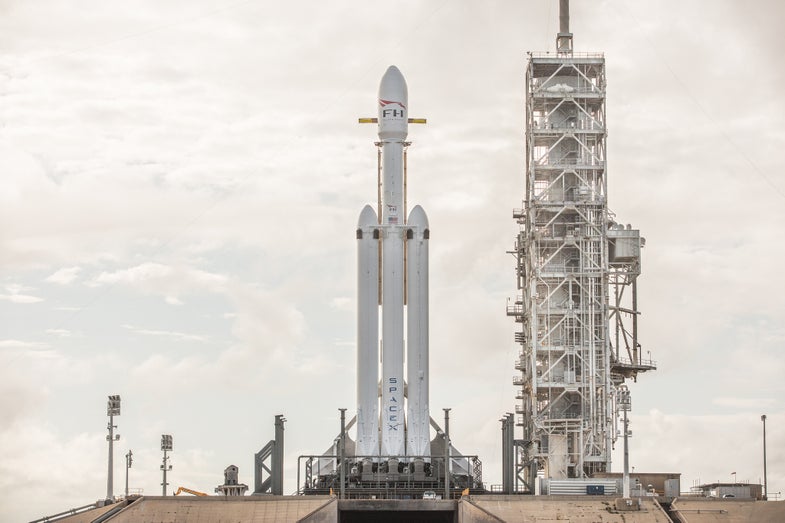 It’s been nearly seven years since Elon Musk first unveiled the concept for his Falcon Heavy rocket, the largest to launch since the Saturn V. Saturn V’s were NASA’s titans of the launchpad, propelling Apollo missions to the moon and Skylab into orbit. Their size and power remain unmatched, even if Tuesday’s test succeeds. But the Falcon Heavy is still a long-anticipated heavy hitter.

Seven years of waiting and anticipation. Two weeks(ish) since it sucessfully test-fired the 27 Merlin engines within its three Falcon 9 cores. And now, finally, finally we get to see it blast off.

The first launch window opens on February 6 at 1:30 p.m. The SpaceX team will have 2.5 hours to launch the rocket before the launch window closes at 4:00. If it doesn’t launch on Tuesday, it will try again the next day. Weather conditions at Cape Canaveral look good so far, with the Air Force’s 45th Space Wing forecasting only about a 20 percent chance of conditions unfavorable to launch—thick clouds or high winds.

Even Elon Musk, who says he’s normally stressed before a launch said on a call with reporters that he was feeling good about this upcoming launch. “I feel quite giddy and happy actually,” he said, attributing his calmness to the immense preparations that have led to this launch. “We’ve done everything we could do to maximize success of this mission.”

Of course, there’s always a chance that technical issues could cause delays as well. The Falcon Heavy’s test-fire (where it fires the engines briefly, but stays on the pad) was delayed numerous times, both for technical reasons and due to the government shutdown.

But whether we get off the ground on Tuesday or Wednesday, you can watch the live stream here:

We recommend tuning in a little before 1:30 pm eastern time, just to make sure you don’t miss anything. And if you can’t wait that long, you can watch this animation of the ideal Falcon Heavy Launch, set to David Bowie’s ‘Life on Mars?’

Even standing on the launch pad, the Falcon Heavy is impressive. It clocks in at 229.6 feet tall and 39.9 feet wide. When the engines ignite they’ll carry 3,125,735 pounds of rocket alone, in addition to the mass of of the cargo. For this first run it will carry Musk’s Tesla roadster with a pressure suit called ‘Starman’ sitting in the car.

On future missions the rocket could carry 140,660 pounds of payload to low-earth orbit, 37,040 to Mars, and 7,720 lbs to Pluto (the longer the journey, the more fuel you need—and fuel takes up weight of its own).

Want to launch something on the Falcon Heavy? There are definitely less expensive ways to get rid of your car. A cargo launch to geostationary orbit will cost you $90 million. The price tag might seem high—but as Reuters reports, it’s a fourth the cost of its closest competitor, and can carry payloads twice as massive.

Being able to reuse rockets is a huge money saver, and SpaceX plans to land all three of the Falcon 9 rockets used in the Falcon Heavy mission safely—two on land, and one at sea.

If all goes well, SpaceX will continue launching the Falcon Heavy, even as Musk and SpaceX begin to turn their attention to their next venture, the BFR. But while we wait for that next leap in technology, the Falcon Heavy will keep launching. It has already won a contract for a Saudi Arabian communications satellite, and is contracted to launch scientific and military satellites for the Air Force later this year.