Why did last week’s SpaceX launch look so strange? 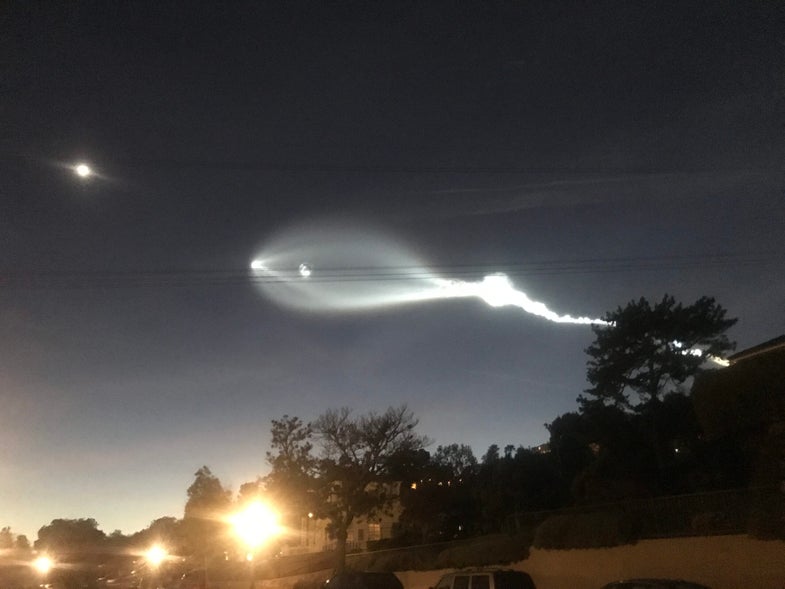 The glowing ball of light that hovered briefly over over Los Angeles last week was not aliens.

And it definitely wasn’t a Nuclear alien UFO from North Korea.

But it did look really odd. It was a pearly teardrop glowing against the darkening sky, lovely and otherworldly. It was also just a cloud of frozen crystals of water and exhaust marking the path of a SpaceX rocket.

Here’s what happened. On the evening of Friday, December 22, SpaceX launched a Falcon 9 rocket from Vandenberg Air Force Base in California, carrying 10 telecom satellites for Iridium.

As the first stage of the rocket zoomed through the upper atmosphere, it passed through an area of dry, cold air. The engines—burning rocket propellent and liquid oxygen—left a trail of exhaust that froze quickly in the cold, quiet conditions.

The result was just like the condensation trails or contrails that trace the path of airplanes across the sky. Writing on Forbes, meteorologist Marshall Shepherd explained that the contrail likely looked so luminous because, though the sun appeared to have set about half an hour earlier on the ground, the rocket was at such a high altitude that the sun was still shining on the condensing cloud. It was a cloud glowing with daylight, arcing across a darkened sky.

The glowing teardrop shape also highlighted the separation of the first and second stages of the rocket, which you can see adjusting in sequential pictures—or this beautiful timelapse of the flight taken by Jesse Watson.

The strange light in the sky was so odd that many people in the area began calling the authorities, prompting a local fire department to release a statement noting that the lights were simply due to the rocket launch. It’s not surprising that people had that reaction. In addition to the recent furor around UFOs which likely primed imaginations, contrails at sunset can often look quite strange.

And this isn’t the first time that people have noticed strange streaks left by spacecraft. NASA rockets can leave wiggly contrails as they make course adjustments in the atmosphere. And one eagle-eyed viewer noticed that years ago, during one of the occasions that the space shuttle was docked on the ISS, a contrail appeared beneath the station as the shuttle vented excess water.

If you’re disappointed that it’s just condensation and not a flying saucer, it’s ok, we understand. But take heart in knowing that the world is such an amazing place that even a routine rocket launch can be beautiful.

A previous version of this article mistakenly reported the date of SpaceX’s launch. This has been corrected.