Four rocket launches in 24 hours turned into three in three days, because space is hard 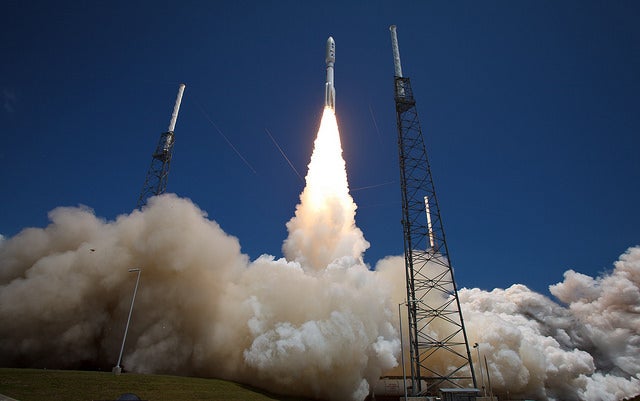 This post is being updated as launch times are rescheduled.

While many industries are winding down in anticipation of the holidays, the space industry is ending not with a whimper, but with a bang — specifically, several bangs characterized by fiery explosions streaking all the way out of the atmosphere. Although Tuesday was originally set to host four (4!) different missions into space, various conditions have postponed them all. But you should be able to catch one or two from the comfort of your favorite device.

What’s the mission: Arianespace, Europe’s premier launch provider, is using a Russian Soyuz rocket to send up a French military satellite into space this week. The satellite, CSO-1, is one of three identical satellites the France and several of its European allies will use for national security surveillance. The flight was originally meant to take place 11:37 a.m. E.T. Tuesday, from Arianespace’s launch facility in French Guiana. It finally took place on Wednesday.

Why is it important: Apart from the payload having major implications in the military capabilities of France and its partners, the launch is set to be Arianespace’s 11th mission in 2018. Although the multinational does not boast the sort of notoriety Blue Origin and SpaceX might, its role in the space industry should not be overlooked.

What’s the mission: After a two-week delay, United Launch Alliance planned to take up a classified satellite, NROL-71, for the National Reconnaissance Office, from Vandenberg Air Force Base in California. But the launch was rescheduled again (and again). The cause? Unfavorable weather conditions.

Why is it important: ULA remains the military’s preferred choice for launching payloads into space. For over a decade, the ULA’s Delta IV had the largest payload capability of all operational rockets in the world, before SpaceX’s Falcon Heavy stripped ULA of that mantle. Still, the Delta IV is able to ferry the types of payloads into space that few rockets can, and it remains a reliable launch system for military assets. Plus, its sheer power means, it’s just plain awesome to watch.

How to watch: Pull up the webcast on Thursday evening before the 8:31p.m. E.T. target for launch, at the link below.

What’s the mission: SpaceX is no stranger to launching national security payloads for the U.S. government, and the latest is an Air Force satellite called GPS III SV01. It was originally meant to go up on a United Launch Alliance mission, but the Air Force elected to go with SpaceX instead. The Falcon 9 rocket was set to take the satellite into orbit on Tuesday from the company’s launch site at Cape Canaveral Air Force Station in Florida. But an onboard computer initiated an abort sequence, and this mission has yet to be officially rescheduled.

Why is it important: As mentioned, the company has a strong relationship with the military, and GPS III SV01 is just the latest. But curiously enough, Air Force requirements are actually preventing SpaceX from pulling off another of its wicked rocket booster landings after the launch. That means the company gets to stay buddies with the Air Force, but it loses an opportunity to show off its ability to bring its rocket back to Earth and reuse it for a future mission.

How to watch: An updated link will be posted when launch details emerge.

What’s the mission: Blue Origin will conduct another test flight this week, as it looks to fly its New Shepard rocket into suborbital space. This time, it will carry a plethora of scientific payloads important to NASA and other research institutions, including a system for measuring rocket fuel in microgravity; another for measuring electromagnetic fields during flight; and a third that will study how dust particles interact in microgravity to glean insight into how planets and other celestial bodies form. Like previous flights, this one will also take up a test dummy into space—Mannequin Skywalker–as a stand-in for future space tourists who might take a ride aboard New Shepard someday soon. The launch, originally set for 9:30 a.m. E.T. Tuesday, was delayed thanks to problems with the ground infrastructure. It seems Blue Origin plans to try again on Dec. 21, but the launch time has yet to be announced.

Why is it important: Jeff Bezos’ company continues to make steady strides in suborbital flights. This is the third New Shepard flight of the year, and could be the fourth flight in a row for the same vehicle (a reusable rocket capable of landing vertically back on Earth).

How to watch: Unlike most of its previous launches, Blue Origin is live-streaming this one. An updated link will be posted when launch details emerge.