The discount airline model is coming to rocket launches 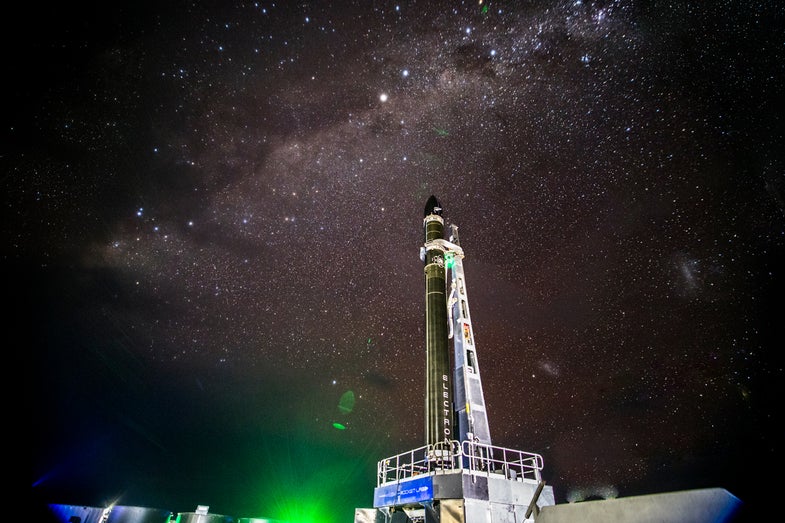 When a sleek 17 meter-tall rocket called Electron blasts off from a pad at Mahia, New Zealand sometime between tomorrow and July 6 it will become the first flight bearing the payload for actual paying customers for its owner Rocket Lab—the standard-bearer of a new breed of small rocket launch companies.

The rockets are much smaller than SpaceX’s 70 meter Falcon 9, which costs roughly $62 million per flight. They’re also smaller than the 60 meter Atlas V of the United Launch Alliance, which can cost roughly $200 million to get into space, once an ongoing subsidy to maintain readiness is taken into account. These new companies—Rocket Lab, Vector, and Virgin Orbit—are selling flights on much smaller rockets for between $3 and $15 million.

Serving the booming industry, which launched more than 300 small satellites in 2017, these new launch companies are applying a discount airline approach to low-Earth Orbit, offering more frequent flights to more destinations, and at much lower prices. This is literally rocket science, and the risks of fiery explosion, costly technical delays, and regulatory snafu are omnipresent. But the Rocket Lab launch shows that the business model, which already looks good on paper, may actually work in the real world, for the many satellite operators who want to get into low Earth orbit but can’t afford to hitch a ride with the American biggies, or the space agencies of Russia, India, or the E.U.

A crucial appeal of these new launch companies is how fast and nimbly they can get a launch going, from mission planning to actually getting a bird in the air.

“By the time you sign contracts, get all licenses, exported, just integrate onto launch vehicle it’s normally a 12 month process,” says Rocket Lab CEO Peter Beck. “We can do it in 12 weeks.”

Small satellite companies that can’t afford to pay the entire cost of a rocket launch have traditionally bought excess space on someone else’s mission.

“We call that hitchhiking to space,” says Virgin Orbit vice president Will Pomerantz. “Hitchhiking can be an affordable way to get where you need to go. But whether on Earth or in space, you don’t control when you leave and where you get dropped off. And there’s lots of rules about what you can and can’t do in the vehicle.”

Not having control over the when and where of a launch can be fine for certain satellites. But it can also be a deal-breaker when mission requirements get very specific.

“If you have a deal with the NFL to get a picture of the Super Bowl, but your satellite’s in the wrong orbit, and instead you get pictures of the parking lot an hour before the game, that’s not going to do you any good,” Pomerantz says.

A major reason Vector CEO Jim Cantrell decided to start his own small rocket launch company was because of the frustration having to wait for a hitchhiking opportunity to come up. As former project team manager for the non-for-profit Lightsail solar-sail satellite, run by the Planetary Society, he and other scientists started designing the craft in 2009. In 2010, science television presenter Bill Nye took over leadership of the Planetary Society, but the group has been waiting to find a flight to the proper orbit high enough for thrust by the solar sail to overcome atmospheric drag ever since. (The first Lightsail went up at too low of an orbit in 2015, in order to test the sail deployment mechanism).

“There were so few flights for that particular orbit, even though it’s very common orbit for lot of imaging satellites, that we had to wait nearly a decade for a flight,” Cantrell says. “That was a formative experience for me. Bill Nye has spent the last 6 or 7 years trying to get a flight for it.”

(The Lightsail 2 is finally scheduled to hitch a ride on the SpaceX’s Falcon Heavy mission for the U.S. Air Force some time after October 30).

The Booming Market for Small Satellites

In the meantime, Cantrell has sold about 280 missions for roughly $3 million apiece, with plans to launch a test flight this year and commercial operations commencing in 2019. Rocket Lab sells launches at $5-6 million apiece, and also has a hitchhiking option for cubesats for as little as $80,000. Beck says he plans to tally 8 successful launches this year. Virgin Orbit will “air launch” its rockets from beneath the wing of a Boeing-747 aircraft for a cost of roughly $12-15 million, with both testing and commercial operations to begin this year. Pre-order clients including the satellite Internet company OneWeb, as well as the ultra-secure data storage Cloud Constellation Corporation

They are all competing for the booming market of small satellites in low Earth orbit, primarily intended for imaging or communications. Companies hope that this next generation of satellites will create new business opportunities, letting them offer faster satellite internet, more secure cloud storage, and more robust tracking of goods around the globe. A report by Spaceworks found that more than 300 nano- or micro-satellites went into space in 2017, a 205% increase over 2016. And none of the small satellite launch company executives seem worried about Elon Musk as a competitor, because SpaceX is serving much larger and more expensive projects than the model of smaller, cheaper, and more frequent launches.

Jay Skylus, the founder of an Alabama-based rocket startup called Aevum, says competing with SpaceX is not a concern, in part because there is such a market hunger for launches. “The big driver for small satellites is data — customers want more and more data, and that’s the ultimate driver for going to space.”

Skylus has planned his first launch for late next year, with a goal of 2 commercial flights per week by 2024. The differences in business models of launching a massive rocket like the Falcon Heavy versus Aevum’s comparatively small RAVN platform mean that Musk might even become a customer, Skylus says. For example, if one satellite within a 3,000-5,000 constellation failed, it would make more economic sense to hire a small carrier like Aevum to put a single replacement satellite into a particular orbit. Whereas each SpaceX flight costs roughly $60 million, Skylus plan to use his frequent launch cadence to bring the cost of “shipping” to space down to $1,100/kg. “We want it to be like taking [a cubesat] over to UPS,” he says.

“Whether the industry grows enough to support multiple small launch vehicles with that kind of launch cadence is yet to be seen,” says Rocket Lab’s Beck. “But the industry is growing at an enormous rate.”

The regulations governing a rocket launch in terms of clearing airspace and nearby ship traffic are onerous — with good reason. “The rocket reliability rate is 95%” Cantrell says. “If aircraft had a reliability rating of 95%, we’d probably would have already had 3 accidents today.”

A 95% success rate isn’t bad for an industry just getting off the ground, but the high level of risk if things go wrong means that governments keep a close eye on launches. (Igniting a metal can full of flammable liquid and propelling it toward the heavens at high speed is risky, to say the least.)

Beck says that 1/3 of his challenge is building rockets affordably. Another third is having to figure out the launch infrastructure, and the last third is dealing with regulations. For example, obtaining a rocket launch window requires shutting down the surrounding area to all nearby air and shipping traffic. After exploring various launch sites in the U.S., Beck decided to build the only private orbital launch site in the world, in his native New Zealand.

“We built our launch site on a small island nation in the middle of nowhere,” he says.

“Launch range issues is one of our very largest problems to solve — to be frank, we’re not entirely sure how we’ll solve it,” admits Cantrell. His Vector rockets launch off of a portable truck, and so can be moved relatively easily to ranges around the country — but to get clear airspace for the 100 launches per year to which he aspires will be a challenge.

Still, the only way that the business will pencil out is if he can produce many rockets for a low price.

“We firmly believe that the right way to get way to get price down on launch is mass production,” Cantrell says. “The first Toyota Corolla probably cost $100 million, but the only way to get the price down is to produce millions of them.”