If Zuma is still up there, these are the people who might spot it. 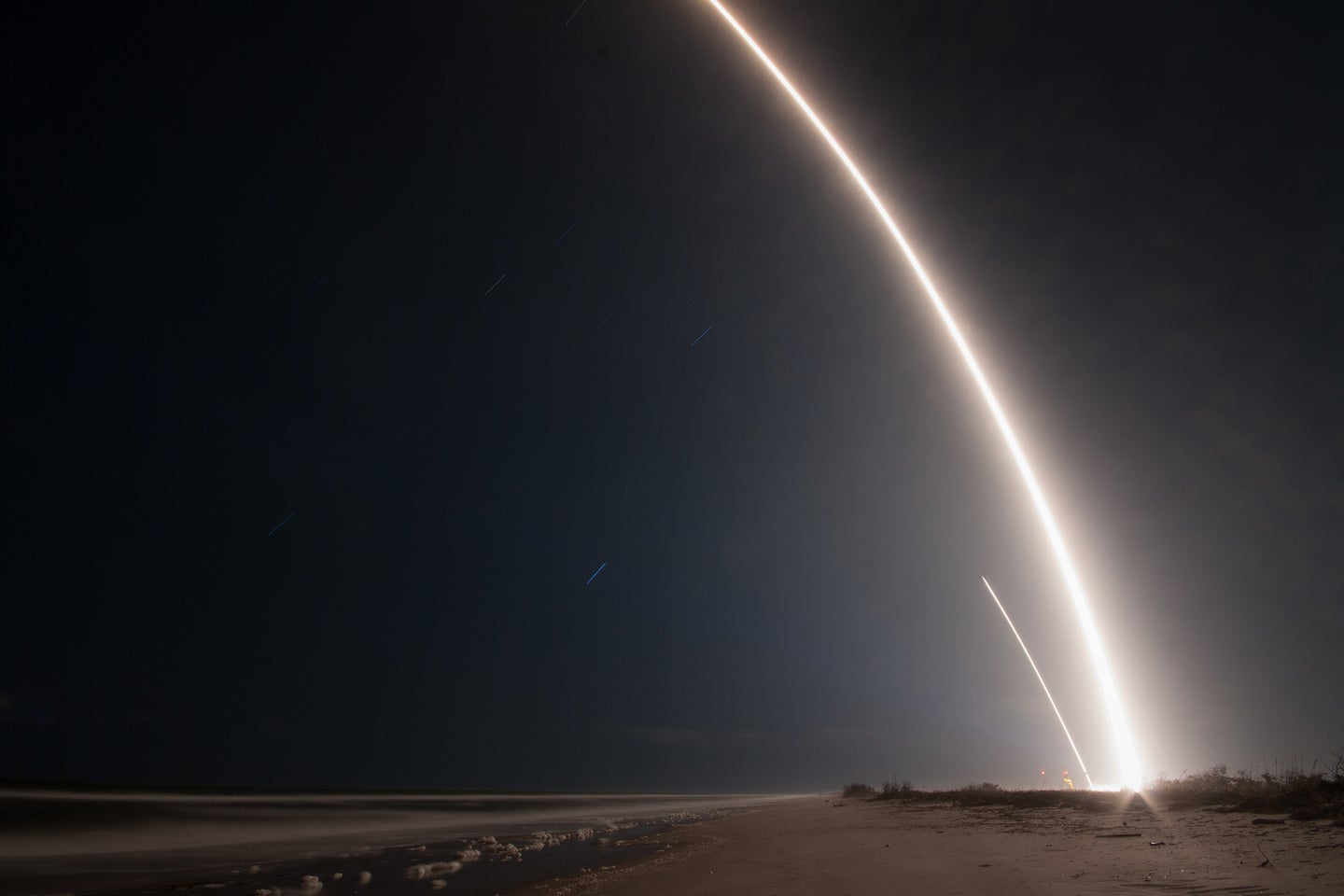 What the heck happened to Zuma? We know that the super-secret satellite was built by Northrop Grumman for an agency of the United States Government, and that SpaceX launched it on Sunday, January 7.

But what we know is vastly outweighed by what we don’t know. We’re not sure which agency the satellite was built for, and while SpaceX has stated that their Falcon 9 rocket “did everything correctly on Sunday night,” the successful deployment of the satellite was not confirmed. And because of the classified nature of the craft, no one is talking about what happened. It might have failed to deploy from the Falcon 9 rocket second stage before the second stage de-orbited. It could have made it to orbit but then malfunctioned. Maybe it actually made it into orbit just fine. But no one is saying what happened to it one way or the other.

If Zuma is still up there, there’s a small group of people who will be ready and watching for it to reappear in a week, when its projected orbit should bring it out of Earth’s shadow and into the daylight. If it’s there, reflections of light glinting off the satellite should be visible from the ground in some parts of Europe and North America. And across the world, satellite trackers—who devote their spare time to seeing what some governments would really rather remained unseen—will be waiting to catch a glimpse of that glint.

Marco Langbroek has been an amateur astronomer for 40 years, starting when he was six years old. He was fascinated by meteors and fireballs, and started taking pictures of them. He kept it up even as he grew into a decidedly more down-to-earth career in archaeology.

It’s a short jump from meteors to falling satellites, and Langbroek soon became interested in things that fell from the sky that humans had put up there to begin with—satellite re-entry. The change in direction led to a new, loosely-knit network of amateur observers that keeps tabs on the orbits of hundreds of classified satellites that continuously orbit the planet.

“I discovered you could do all kinds of observations on secret satellites, and that captured my imagination, because, well, it’s secret. That’s exciting,” Langbroek, who’s based in the Netherlands, explains with a laugh. “Seeing what you’re not to supposed to see is always a thrill.”

Governments actually asked their citizens to track satellites in the early days of the space race. Even before Sputnik, Project Moonwatch trained amateur astronomers to track the highly anticipated satellites being developed by the United States. The teams used special telescopes or binoculars to track where a satellite went by watching the stars they sped past, using a stopwatch to record each craft’s progress.

Not all observers watch for spy satellites. Many others simply make observations of satellites whose orbits are already known, or try to photograph them as they head across the night sky. But a classified satellite offers a little more of a challenge, which can be appealing to a small—a very small—subset of people.

Ted Molczan, a Canadian observer who has been part of the group (which has no name, no leadership, and communicates via a mailing list called SeeSat-L that was set up in 1994) says that over a one year period, 21 people from around the world contributed observations. Most observers were from Europe or North America, but there was one from South Africa and another from Australia. “It’s amazing what you can do even with a tiny, non-organized group like ours,” Molczan says. He estimates that those 21 people produced over 21,000 observations, 18,000 of which were of 200 classified satellites.

And that was just one year. The group monitors about 400 secret objects in the sky in total, keeping tabs on the orbits and the health of the satellites. If one isn’t making maneuvers to keep itself in orbit, or is glinting in a particular way, these researchers know that something’s gone wrong.

People come and go from the group, becoming more active when they can and stopping when life or work takes them elsewhere for a time. It’s not a hobby for everyone, as Molczan readily admits.

“It is hard work, and not everyone wants that in a hobby. There are people who think they want it, but soon they tire of it and say ‘aw shit, there are better ways to have fun than this,” Molczan says. “And I don’t blame them. It’s a hobby, and if it’s not for you, find something that is. Life is short, do something you like.”

Molczan was a child during the space race and was fascinated by the news of the new satellites passing overhead. As an adult he learned that scientists were enlisting the help of amateur astronomers to help track satellites to make scientific observations. He taught himself how to track satellites using a book called Observing Earth’s Satellites, and setting up binoculars on a sturdy tripod in his Toronto apartment. He’d get mail from NASA’s Goddard Space Flight Center with details on orbits of satellites, and would match his observations to the published records. But not all the records were published.

How to spot a spy satellite

During the Cold War, governments stopped announcing the exact coordinates of some classified satellites as they developed their own professional tracking networks. But the satellite watchers figured out a way to track them regardless. “A number of people I came to know in the 1980s had already set aside time to keep track of these spy satellites. I think it was partially this idea that ‘well, you’re going to try to keep this a secret, but we have enough skill to keep track of them, and so we will,’” Molczan says. “They viewed it as a challenge, and I thought it was fascinating that you could find these and track them down.”

The launches themselves are big, fiery, and loud, and in the U.S. happen close enough to population centers that the government announces when a launch is happening—even if it’s classified. Spilling that vague secret is generally better than the mass panic that would follow noises and smoke coming from a launch site with no warning. That gives trackers a starting point—and time—for the satellite they’re after.

Rocket stages typically come crashing back to Earth once they’ve delivered their payload to orbit. And if governments don’t want people freaked out by loud noises at a launch pad, you can bet they don’t want headlines about folks inadvertently crossing the path of falling space debris. So they note a segment of the planet—usually a bit covered by ocean—where they think the spacecraft will re-enter, and reach out to airplane pilots and ship captains, warning them to stay away for a particular time. This gives satellite tracker a general idea of what direction the rocket is heading in, which they can use to estimate what kind of orbit the satellite is being sent into.

“That trajectory that is hinted at or revealed by those coordinates lets you calculate—to a pretty good approximation—the position of the orbital plane that the satellite is going to enter,” Molczan says. “That’s the first big step in finding the thing. You can think of the orbit as a big ring around the Earth. Once we know that, the only other thing is: where within the ring is that satellite?”

The satellites themselves are visible for the same reason the moon shines in the sky. They reflect light from the sun, and that makes them visible from the ground. Some missions have tried to obscure their satellites from view, but those efforts haven’t been successful (that we know of, of course).

“The whole idea that you can keep these satellites secret is a little bit silly,” Langbroek says. “Some of them are easily visible with the naked eye in an urban environment. It’s similar to parking an aircraft carrier in front of the Golden Gate Bridge and thinking you can keep it secret.”

Satellite watchers have different ways of tracking their prey. Some use telescopes or binoculars to take the measurements, just like the Project Moonwatch participants. Others are more high-tech. “I mostly use photography and very sensitive video to make measurements of satellite positions,” Langbroek says.

The enthusiasts also write their own computer programs to calculate orbits, or use ready-made programs, and then send their observations on to colleagues around the world. “If you were to read our mailing list you would find it utterly boring. Occasionally there might be actual discussions of something, but not often,” Molczan says. “It’s just messages with strings of numbers and ‘Best Wishes.’”

Members of the group have their own lives and interests, and they may use the information they gather in different ways. Some speak to the press and write blogs for the public, others don’t. They all have their own lines as to what observations of classified satellites they will discuss or not.

Molczan has used his hobby to look back into the past, cleaning up rare archival footage of some of the earliest satellites, and using his skills to verify footage of the Sputnik One rocket crossing the skies of Baltimore.

Langbroek helped identify secret satellites that were in a position to gather information related to the crash of passenger airliner MH17, which went down in Ukraine in 2014. He was even asked to write a position paper on the crash that was presented to Dutch Parliament.

Molczan has taken a break from active satellite observing to focus on his business, and doesn’t plan on watching for Zuma. But Langbroek and some others hope to catch a glimpse of the satellite—if it’s still up there.

The satellite is tantalizing because it has such a strange history of delayed launches, and its intended orbit was really odd, with a launch that would have set it at an orbital inclination of about 50 degrees. That orbit isn’t normally used by satellites, Langbroek says, but is similar to the orbit of the International Space Station. He thinks that it may be a technology demonstration of some kind. No one is quite sure exactly what technology is (maybe) being demonstrated, however.

But what’s life without a little mystery? If there are any clues to be found, it’s likely that we’ll hear about it from people like Molczan and Langbroek, who watch the satellites that watch us.

“To me it makes for an agreeable hobby. It’s got math, it’s got physics, you can make use of computer science, it even opens doors into history and policy if you’re so inclined,” Molczan says. “People will sometimes tell me that it’s weird. But some people build ships in bottles, and that seems weird to me. Who am I to judge? What a dull world it would be if we all liked the same thing.”