Meet the SpaceX ships that will never go to space

These ships catch waves (and rockets) instead. 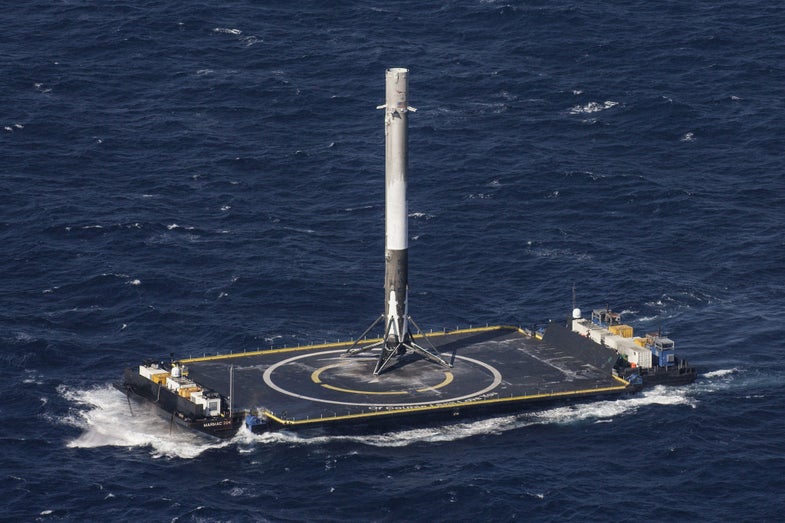 A Falcon 9 engine core on drone ship Of Course I Still Love You. SpaceX
SHARE

SpaceX is known for its spaceships—from the Dragon capsule that resupplies the space station, to the proposed interplanetary transport system. But it’s the company’s more traditional, water-going vessels that keep the lofty dreams of affordable spaceflight afloat. Take a closer look at SpaceX’s non-space ships.

Before two of the Falcon Heavy engine cores could gracefully land on twin launchpads in a display rivaled only by synchronized divers, Elon Musk and the SpaceX team first had to prove their rockets could come back to Earth in a controlled and steady manner.

While SpaceX’s first touchdown in 2015 happened at Landing Zone 1 in Cape Canaveral, SpaceX still wanted to be able to softly land (and quickly recover) rockets on a floating platform in the ocean—traditional landing pads are small and expensive, and the oceans are vast. SpaceX succeeded on April 8, 2016, landing the first stage of a Falcon 9 rocket on the droneship Of Course I Still Love You in the Atlantic Ocean.

Since then, landings on Of Course I Still Love You and its sister ship in the Pacific Just Read the Instructions have become more common, helping SpaceX reuse the expensive first-stage engine cores of its Falcon 9 rockets. The drone ships are especially important for launches carrying heavier loads to higher orbits, as the rockets use more fuel on those launches and have less available to guarantee a safe landing on dry ground. Though the landings get all the attention, the ships—also called Autonomous Spaceport Drone Ships or ASDS—are pretty amazing, too.

Once towed into position (more on the tugs later) the drone ship’s GPS and thrusters keep it in one place, waiting for the return of the rocket. The rockets aren’t small, and these ships aren’t either. They’re modified barges about the size of a football field, with hulls 20 feet deep. Barges like this are typically used to haul cargo, but their large area also makes them a perfect landing pad for rockets.

In 2015, when SpaceX was still anticipating its first landing, NASA Spaceflight reported on some of the extensive modifications used to turn barges into drone ships. The thrusters that keep the ship in place were repurposed from offshore oil rigs that used similar tech. Then there are added steel blast walls to protect equipment during a rocket landing, the autonomous guidance and positioning systems, and steel wings that extend the deck of the ship.

Of Course I Still Love You and Just Read The Instructions will soon be joined by another drone ship—A Shortfall of Gravitas—which is currently under construction and will operate on the East Coast. Having two drone ships on the East Coast could allow for simultaneous water landings of engine cores used in future Falcon Heavy launches.

Engine cores aren’t the only important part of a rocket, and SpaceX wants to reuse as much of their equipment as possible. Being able to reuse a rocket makes space launches less expensive.

SpaceX would like to be able to catch and re-use the fairing or nosecone of the rocket, which protects the payload (typically a satellite) from the intense forces of going through Earth’s atmosphere. The fairing is also designed to help reduce drag on the rocket as it cuts through the air. It’s an important job, and it doesn’t come cheap. For SpaceX launches, the cost of the fairing is estimated at about $6 million. It splits in half as it releases a payload in space, and then those halves fall back to Earth. SpaceX has successfully landed these fairings in the ocean before, but Mr. Steven marks a more purposeful plan for recovery and eventual reuse.

Musk says that they’ve integrated thrusters and a guidance system into the fairing to help guide it safely back into the atmosphere, at which point a parafoil (think a parachute shaped like a wing) will deploy, and Mr. Steven will try to catch the nose cone in the steel and netting structure at the back of the ship.

That’s the idea, anyways. Thursday’s attempt to catch the fairing with Mr. Steven missed by a few hundred meters, but Musk hopes that larger parachutes to slow down the fairing’s descent might result in a successful catch next time.

In any case, the fairing did land safely in the water, close enough for people on Mr. Steven to send back this shot:

Once out in the water, SpaceX’s drone ships use their thrusters and GPS to keep them in place, even in rough seas. But to get out to their appointed location, they need a push. Tugboats and supply ships drag the drone ships into position, retreat to a safe distance while the rocket lands, then move in, carrying crew and equipment to secure the rocket (or pieces of rocket) for a ride back into port, welding the rocket to the deck to secure it.

But the drone ships aren’t the only pieces of SpaceX equipment that need a backup team. When SpaceX’s Dragon capsules return from delivering supplies to the International Space Station, they need a lift too. These capsules land in the oceans, where they are picked up by support vehicles like the NRC Quest, a ship that has also worked to respond to oil spills and deployed technology used to generate power from ocean waves. It’s all part of a growing SpaceX fleet, but one that is hardly limited to space.