The Japanese billionaire isn't the only one headed for the moon. 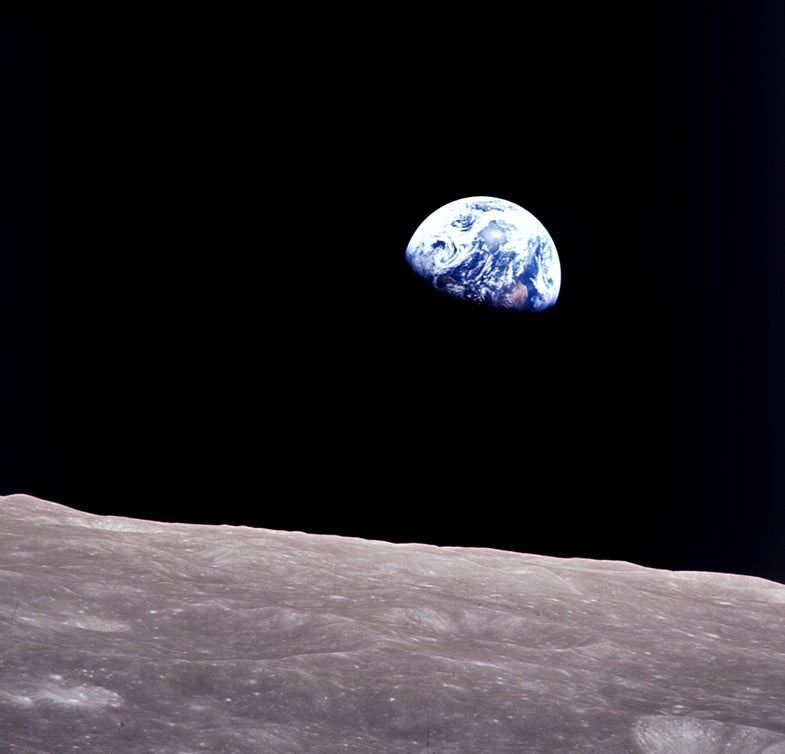 Earth as seen from the moon in an iconic image taken by Apollo 8 astronaut Bill Anders. NASA
SHARE

Only 24 people have ever orbited the moon. The first three managed the feat on Christmas Eve, 1968, nearly 50 years ago. The last three left in 1972. Since then, no one has gone back. Recently, both the United States and China have expressed interest in a lunar return visit—but so have private companies.

On Monday night, at 9:00 p.m. eastern, Elon Musk announced the identity of the first passenger on SpaceX’s inaugural lunar mission.

“We are honored that he’s choosing us—we’re not choosing him,” Musk said of Japanese billionaire Yusaku Maezawa, who will become the first non-American to fly around the moon.

Maezawa introduced himself to the assembled journalists as a skateboarder, drummer, and an entrepreneur who started an e-commerce business, Zozotown. The 42-year-old’s net worth is estimated at 3 billion dollars and he is an avid art collector who once bought a Jean-Michel Basquiat painting for $110.5 million.

In short, Maezawa could choose to do just about anything with his money. “I choose to go to the moon,” Maezawa declared Monday night.

Most excitingly, Maezawa won’t be alone on his trip, tentatively scheduled to launch as early as 2023. He plans to invite some of his favorite living artists to accompany him on the ride. (He noted during his remarks that the late Basquiat would have been his first pick.) A video at the announcement featured nine different artistic categories; a film director, a painter, a dancer, a novelist, a musician, a fashion designer, a sculptor, a photographer, and an architect.

The idea is for six to eight artists to accompany Maezawa on the roughly week-long journey to the moon and back, and then have them create something based on their time in space upon their return to solid ground. Maezawa describes himself as the ‘Host Curator’ of the venture, which he is calling ‘Dear Moon.’ Maezawa said he plans to start by asking artists whose work he admires.

“I choose to go to the Moon, with artists. If Pablo Picasso had been able to see the moon up-close, what kind of paintings would he have drawn? If John Lennon could have seen the curvature of the Earth, what kind of songs would he have written? If they had gone to space, how would the world have looked today?” Maezawa writes. “Together with Earth’s top artists, I will be heading to the moon… just a little earlier than everyone else.”

You can learn more about the project on its website dearmoon.earth which features a video about the endeavor, or on Twitter @dearmoonproject.

Musk also revealed that Maezawa was the same person who planned to go on the proposed SpaceX lunar launch announced in February of 2017. That initial announcement featured plans to launch in the much smaller Crew Dragon spaceship, which could only accommodate two passengers. The BFR is designed to accommodate up to 100, though for its inaugural lunar flight, it will only carry Maezawa and his companions.

There are plenty of questions still remaining: will Elon Musk be one of the passengers? (Musk left the possibility open during the press conference.) Which artists will be selected? What training will they go through?

Musk didn’t disclose the sum Maezawa committed to the mission, but he did say that it was “a lot of money.” The funds will go toward development of the rocket that will carry him on his long-anticipated journey. Musk said that the development of BFR would cost about $5 billion. “I don’t think it’s more than 10 [billion dollars] or less than 2 [billion dollars],” Musk said.

How will they get there?

And speaking of that rocket… the BFR is still very much under construction in Los Angeles at the moment. Musk said he planned on doing short hopper flights with BFR in 2019, with the first orbital flight in two to three years. Initial flights will be uncrewed.

The short hops will take place in Brownsville, Texas, but the location of the orbital launch and landing is still undecided. Musk mentioned during the press conference that the launch could occur on a floating launch pad.

The Monday announcement did point out new design features of the BFR including movable fins at the fore and aft of the ship, which will help the ship brake in Earth’s atmosphere as it comes in for a very steep landing.

Danger, bravery, and safety all reared their heads over the celebratory announcement. Musk says that the BFR design does build on work they’ve done for the NASA Crew Dragon system, but there are still significant risks in developing new spaceflight technologies, as tragedies on Apollo, Shuttle missions, and test flights have demonstrated over the decades.

Musk said that the BFR is designed to “land anywhere in the solar system” thanks to its propulsive landing system, which will allow it to touch down on planetary bodies without an atmosphere. At an Air Force-sponsored symposium, SpaceX President Gwynne Shotwell said that the company was still aiming to send people to Mars by 2024.

But first, they’ll reach for the moon.