SpaceX wants to build the Swiss Army knife of rockets

One rocket to rule them all. 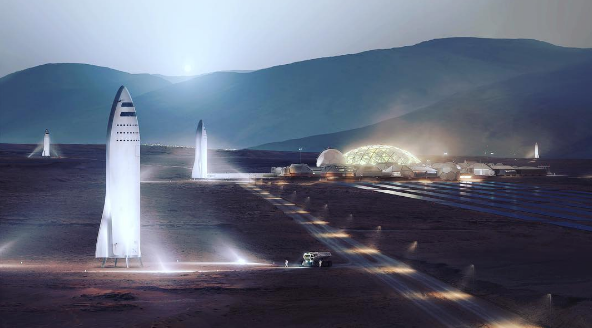 Just how far can that rocket take you? SpaceX founder Elon Musk hopes that his new vessel can take journeys as long as ventures between planets, and as short as a hop across the globe.

SpaceX is on a roll. They’ve stuck the landing of their booster rockets 16 times in a row with Falcon 9, and space enthusiasts are still eagerly awaiting the launch of the far larger Falcon Heavy. Their Dragon capsule has successfully delivered cargo to the space station, and is set to carry humans as early as next year. But despite the string of successes, Musk has headed back to the drawing board for his latest idea, announced on Friday at the International Aeronautics Congress meeting in Australia.

Elaborating on his long-standing plans to get to Mars as expeditiously as possible, Musk announced that while SpaceX would keep working on the Falcons and Dragon long enough to build up a stock of those models, his company would eventually shift focus away from the vehicles entirely, replacing them with a Big F*cking Rocket.

Yes: that is really, truly what Musk is calling his new rocket. We’ll just call it the BFR.

The BFR is slightly smaller than previous iterations of the same concept, but it’s still huge. It will be about 30 feet across and 347 feet tall, powered by 31 methane-fueled Raptor rockets*. It’s big enough to send people and cargo beyond the Earth-Moon system, but that’s not all it’s designed to do.

Instead of designing a rocket for one specific mission, Musk is looking to manufacture the Swiss Army knife of aeronautics. He wants something that can conveniently adapt to any mission required—while still being durable enough for repeat uses.

The entire BFR system involves both a booster to propel the ship out of Earth’s atmosphere, and a spacecraft capable of carrying humans or cargo. Both sections are intended to be re-usable.

The spaceship could be configured for long-haul flights with 40 cabins, giving passengers some private space en route to far-flung destinations like Mars. The BFR could also be tooled to carry cargo, or to pack in even more passengers for short-haul flights.

Really short-haul flights. At the end of his announcement, Musk declared that these rockets could become part of our terrestrial transportation systems. He painted a vision of trips anywhere around the globe in less than an hour—and often even less. One could rocket from London to New York in just about 30 minutes, he claimed.

In an Instagram post, Musk promised that the cost of the flight would be about the same as a ticket on a commercial plane. No word yet on what the environmental impact will be, or how flight controllers will deal with not only the rocket launches, but also the landings of both a spaceship filled with people and the re-usable boosters that pushed them into the sky.

It certainly sounds nice: if you only spent an hour in the air to get to the other side of the planet, travel could truly be about the destination instead of the journey. But people have been dreaming about this kind of thing for decades, and Musk has plenty of hurdles to clear before he can make the enticingly retro-futuristic idea of transatlantic rocket travel a reality.