...We just don’t know what the new plan is yet. 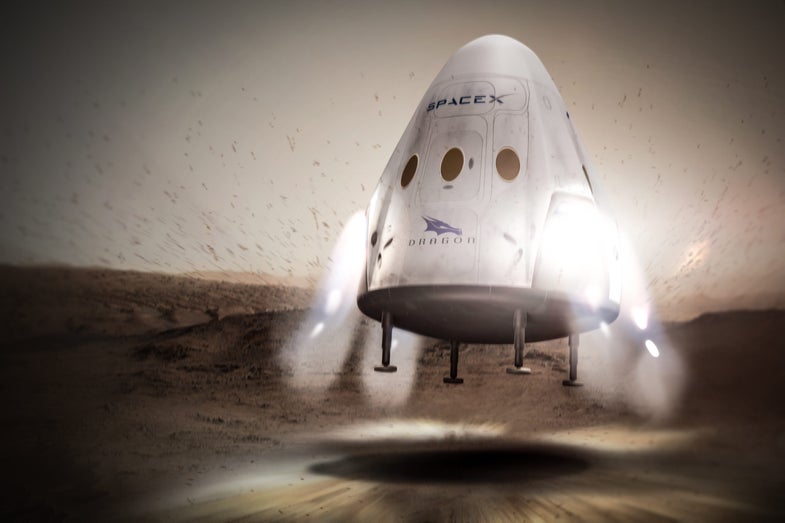 On Wednesday, SpaceX CEO Elon Musk announced that the company is switching up its plans for landing on Mars.

Last year, the company declared that it would try to send its uncrewed Dragon spacecraft to Mars in 2018. Deemed “Red Dragon,” the capsule would fire its retro rockets to softly land cargo or science experiments on the red planet. NASA was hoping this technology could pave the way to putting humans on Mars.

But, like many things in spaceflight, things didn’t go exactly according to plan. The mission got delayed to 2020, and now, speaking at the International Space Station Research and Development Conference in Washington, D.C., Musk said the company is switching up the landing routine.

“There was a time that I thought the Dragon approach to landing Mars, where you’ve got a base heat shield and side-mounted thrusters, would be the right way to land on Mars,” said Musk, speaking at a conference. “Now I’m pretty confident that is not the right way and there’s a far better approach.”

Safety seems to have also been a concern—the company previously planned to upgrade the Dragon capsule’s parachute landing system, to powered landings so that it could carry astronauts from the International Space Station to a landing pad. Those upgrade plans also appear to be scrapped, too. “It would have taken a tremendous amount of effort to qualify that for safety, particularly for crew transport,” said Musk.

He later clarified and said that they’re still considering powered landings on Mars, but with a “vastly bigger ship.” At the moment there are no other details on what that vehicle might look like, but if it works, it might make it easier to send people to Mars by the hundreds, as Musk plans.

It’s not clear whether SpaceX will still attempt the 2020 Red Dragon mission to Mars, but it seems doubtful at this point.