Blue Origin’s next rocket may finally get sea legs

Simulation shows the New Glenn landing on a drone ship 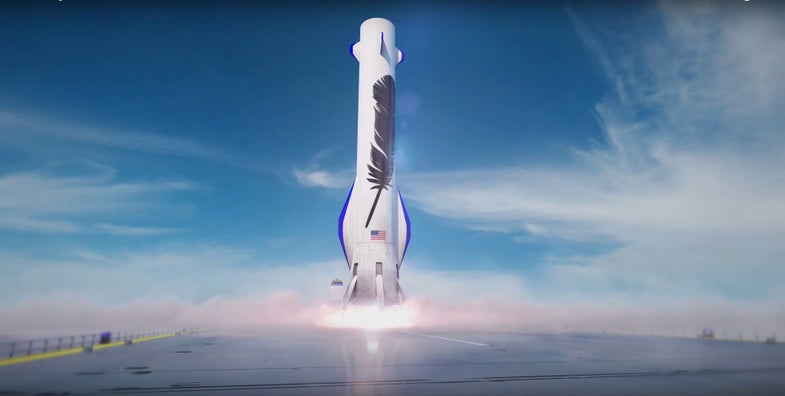 Just a day after revealing its shiny new engine, the BE-4, Blue Origin is showing off its latest rocket in a new video. Set to inspiring music and full of glistening graphics, the animated New Glenn rocket wiggles its landing fins before lifting off. In space, the payload and second stage separate from the main booster, and the latter falls back to Earth, firing its thrusters for a gentle landing on … a platform in the sea.

Although Blue Origin’s New Shepard rocket beat SpaceX’s Falcon 9 in traveling to space and returning for a vertical landing on solid ground, SpaceX has already mastered the art of sea landings, which are more difficult.

Sea landings make it a lot easier to reuse rockets, because about half of all launches end up flying over the ocean. You can either expend a lot of (heavy, expensive-to-launch) fuel returning the booster to land, or you can bring the landing platform to the booster, as SpaceX does with its drone ships.

To Blue Origin’s credit, it’s not just being a copy cat—the company actually tried to patent the idea of landing rockets on sea platforms back in 2010. However, SpaceX disputed the patent, and Blue Origin ended up negating many of the claims.

Blue Origin CEO Jeff Bezos announced on Tuesday that the New Glenn rocket shown in the video has its first customer; a Eutelsat satellite will ride into space on the New Glenn’s first launch, estimated to occur around 2021.

When it launches, New Glenn is expected to be even more powerful than SpaceX’s Falcon Heavy rocket—but not as powerful as NASA’s upcoming Space Launch System. Seven BE-4 engines will power the New Glenn’s main booster for liftoff. Bezos estimates that each booster could be reused in up to 100 launches.