The Dawn spacecraft arrives at Ceres this March, and it could be the most surprising space mission in decades 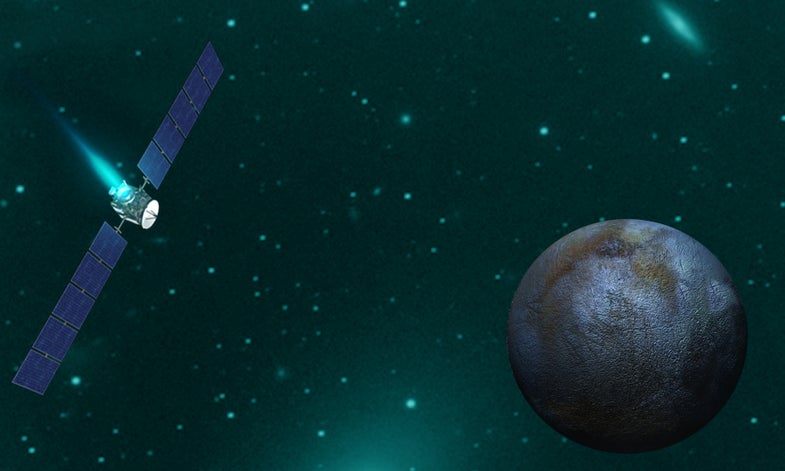 An illustration of the Dawn spacecraft arriving at Ceres. NASA/JPL-Caltech/UCLA/McREL
SHARE

While the world awaits the first visit to Pluto this July, another space mission will reach a strange world much closer to home. And months sooner.

A small robot named Dawn is nearing the end of its seven-year, 3.1-billion-mile journey deep into the Asteroid Belt. By shooting ions out of its rear—and stealing a bit of Martian orbital energy back in ’07—Dawn putters along at about 450 mph toward the largest unexplored object between the Sun and Pluto.

This March, we’ll arrive at Ceres. It’s the biggest thing in the Asteroid Belt, with a diameter of 590 miles, a surface area four times larger than Texas, and a mass about one-fourteenth that of Pluto. Though it’s technically an asteroid and a dwarf planet, some scientists regard Ceres to be a real planet—the tiniest in our solar system.

However it’s classified, we know shockingly little about it. Powerful, sophisticated telescopes like Hubble can only glean hints of what Dawn will see when it slips into orbit around Ceres. A brown, cratered, clay-like surface is likely. But it’s possible Dawn will spot some more exciting features from above, such as an atmosphere or “cryovolcanoes” that spew frozen water.

“Ceres is going to be a really cool-looking object when we get there,” predicts Mark Sykes, CEO of the Planetary Science Institute and Dawn mission scientist. Because Ceres contains a lot of water ice near its surface, periodic defrosting may have relaxed the planetoid’s features, erasing its older craters. “Maybe we’re going to have a Salvador Dali planet, where everything’s kind of melted,” Sykes says.

Other members of the mission are trying to keep an open mind about the biggest question mark between Mars and Jupiter, and perhaps in the entire Solar System.

“What is the nature of this alien world? What does it look like, what is it made of, how does it work?” asks Marc Rayman, Dawn’s chief engineer. “Whatever we find, there will be unexpected phenomena there. There will be structures or features that people haven’t thought of.”

A Planet In The Asteroid Belt? 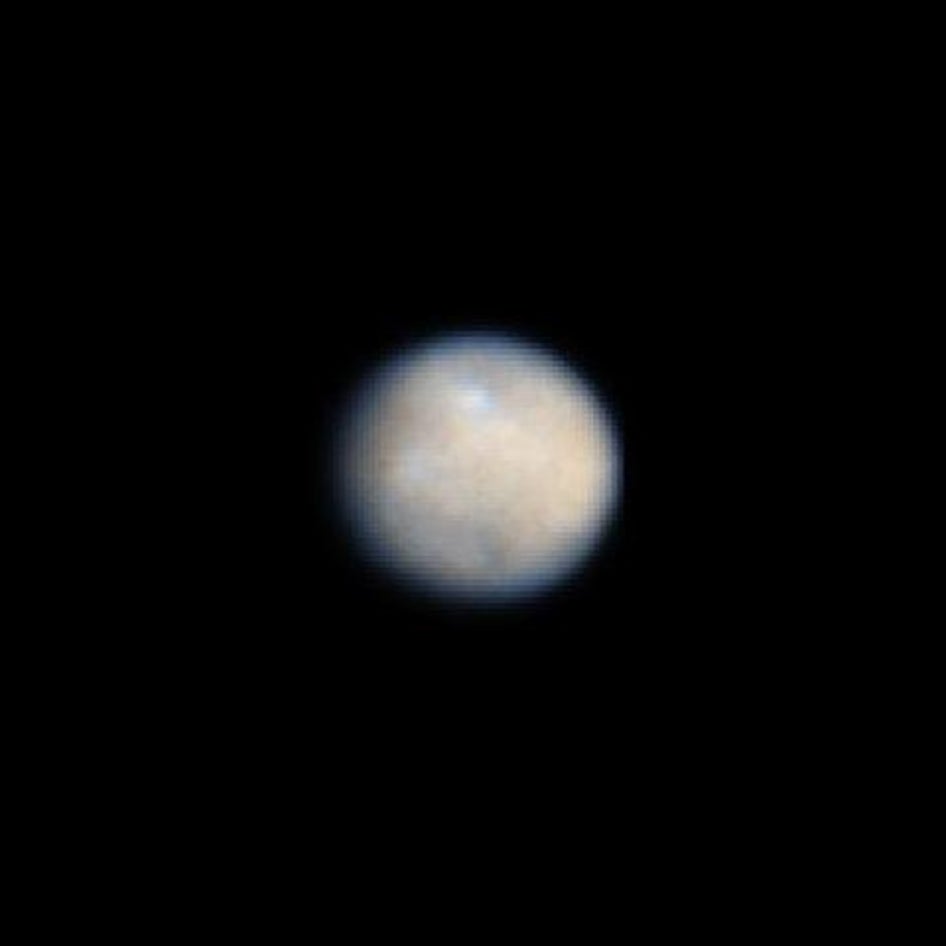 This image, taken by the Hubble Telescope in 2003 and 2004, is one of the clearest images we have of Ceres. When the Dawn spacecraft arrives there this spring, we’ll finally know what the planetoid really looks like.

In the late 1700s, astronomers wondered about the large gap between Mars and Jupiter. Bode’s law predicted a planet should be there, and in 1801, scientists finally found one… sort of. For half a century, Ceres was classified as a planet. Then, as telescopes became better, scientists found a number of smaller objects in a similar orbit. Collectively, those objects came to be known as the Asteroid Belt, and Ceres was reclassified as an asteroid.

Ceres’ identity was called into question again in 2006, when scientists debated the status of Pluto and the definition of a ‘planet’. Planetary scientists like Sykes advocated for the name to apply to any object that has enough gravity to be round. The International Astronomical Union, however, defined a planet as something with enough gravity to clear everything out of its orbit. Pluto failed that test. And so did Ceres.

“It would have been cool, because if Pluto were a planet, then Ceres would have to be, too,” says Sara Seager, a planetary scientist at the Massachusetts Institute of Technology.

Ceres is, in a sense, a big, round, muddy time machine.

Researchers are still splitting hairs over how to define a planet, but most agree that Ceres is likely a protoplanet—that is, an embryonic planet that got frozen in the early stages of development. By visiting Ceres, the Dawn mission hopes to understand more about how planets form, and what conditions were like in the early days of the solar system. It is, in a sense, a big, round, muddy time machine.

The Dawn mission team is eager to see how Ceres compares to Vesta, another large asteroid/small protoplanet, which Dawn visited in 2011. Vesta is dry and rocky, like the inner planets of the solar system, whereas Ceres is more like the icy objects of the outer solar system. Studying both could reveal the processes that determine the fate of an infant planet. 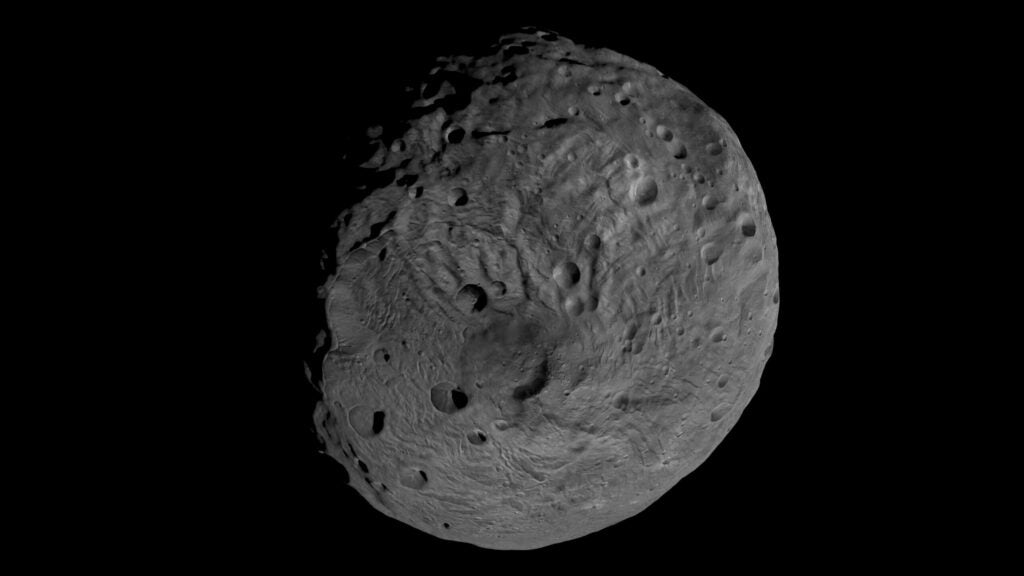 The Dawn mission visited the asteroid Vesta in 2011 and 2012, returning lots of data and stunning images.

The Search For Life

Beneath its surface, Ceres may harbor a liquid ocean. That’s exciting for biologists who are looking for life on other worlds, because on Earth at least, everywhere there’s water, there’s life.

Astronomers working on the Herschel Space Telescope in January 2014 reported detecting water vapor in a few patches around Ceres’ mid-latitudes. Something was spraying water into the air in very low yet detectable amounts. No one knows what the source is yet—it could be boring, such as ice sublimating into water vapor. But the universe is full of surprises, if the vapor jets of Enceladus and sulfur-belching volcanoes of Io are any evidence. Ceres could have cryovolcanoes that gush with water melted by the heat of radioactive decay deep below the planetoid’s surface.

Dawn is currently the best—and only—means to find out more.

Ceres might also harbor a lot of organic molecules. Combined with the water, radioactive heat, and other potential energy sources, including the Sun, Ceres is about as attractive a destination as an astrobiologist could hope for. These three things—organic molecules, water, and energy—are thought to be the crucial ingredients required for life to evolve.

“Small planets like Ceres and Pluto may be critical to understanding where life comes from and where life might be in the universe.”

The chances that life already exists on Ceres are probably very, very slim. Even if Ceres is a lifeless rock, however, the lessons to be learned would be priceless, says Rayman. On a world with all the necessary ingredients for life, for example, why could life not evolve? And what does that say about life’s chances elsewhere in the universe?

If microbial beings do happen to live in Ceres’ inner ocean, Dawn isn’t equipped to detect them. But the spacecraft’s observations could influence NASA to select future missions with the capability to detect life.

“If there is water under the surface, and it’s communicating with the surface through these cryovolcanoes,” says Sykes, “maybe we could send another mission to scoop up some water and ask, ‘Are there any dead bugs here?'”

Small and icy worlds like Ceres vastly outnumber Earth. In fact, they’re the most common types of planet-like bodies in our Solar System—and possibly the universe. “If the ice melts, would life evolve in that region?” Sykes asks. “Could these be incubators of life in the universe? I think these small planets, like Ceres and Pluto, may be critical to understanding where life comes from and where life might be in the universe.” 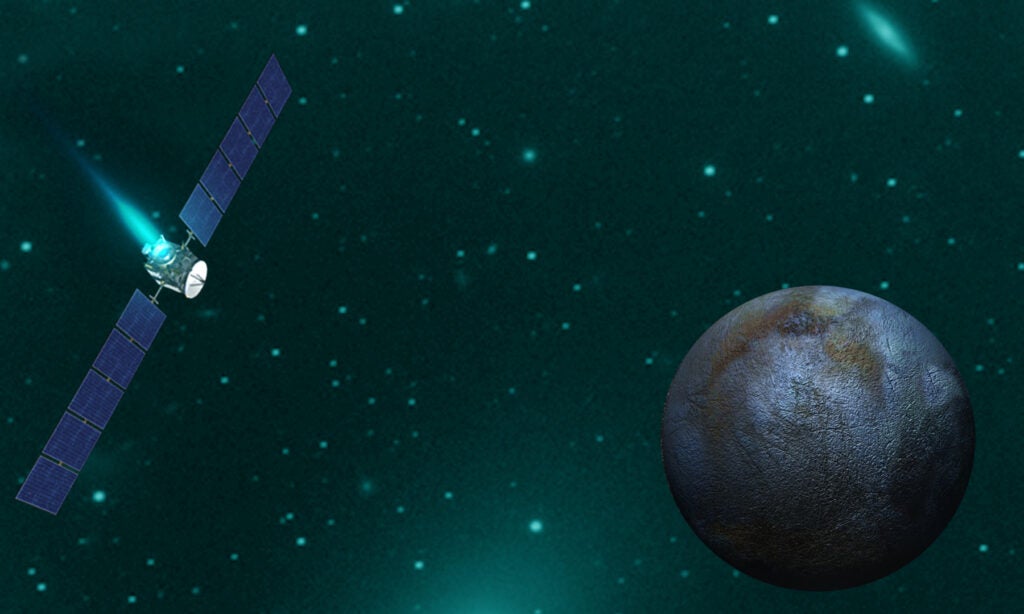 Are We There Yet?

An illustration of the Dawn spacecraft arriving at Ceres.

The Dawn spacecraft launched Sept. 27, 2007. Since then, it has been moving in a spiral trajectory toward the outer solar system. It reached the protoplanet Vesta in July of 2011, and studied it for fourteen months. Now, the spacecraft is about to reach its ultimate destination.

Here’s the plan once it arrives:

Popular Science is covering the latest Dawn and Ceres news throughout the mission. Follow our complete coverage at popsci.com/ceres

Correction, January 23, 2015: A previous version of this article listed the future timeline dates as taking place in 2014. Since it is already 2015, that would be impossible. We regret the error.