Reflections from a prodigious force in space exploration. 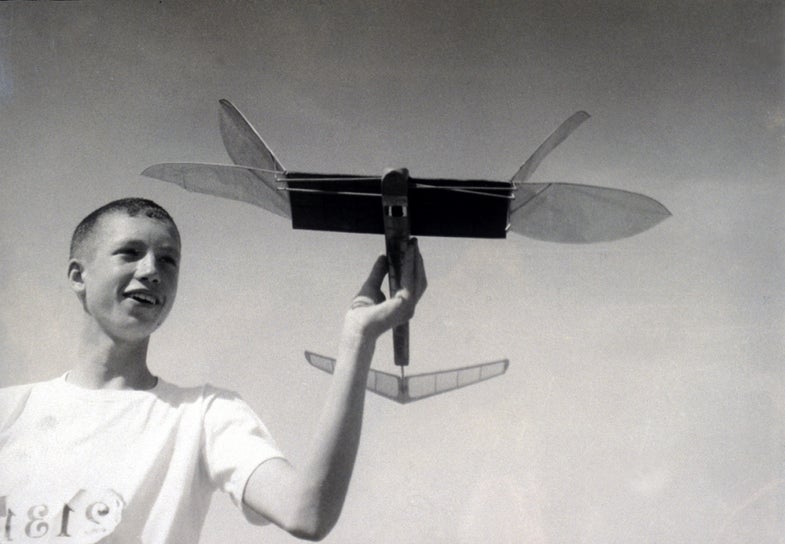 Don Gurnett with a model airplane in the 1950s. Department of Physics and Astronomy, University of Iowa
SHARE

When it comes to space exploration, Don Gurnett has seen it all. He still vividly remembers seeing America’s first attempt at a satellite launch, the Vanguard project, blew up on the launch pad from the comfort of his living room. When it comes time to talk of more modern cosmic endeavors, he will wax poetic about hydrocarbon rains falling into pools of methane on Titan. He’s been there for everything, and he’s not done yet.

Gurnett was a 17-year-old freshman—just two weeks into his engineering courses at the University of Iowa—when scientists in the Soviet Union launched Sputnik 1 on October 4, 1957. The 184-pound satellite triggered a surge of innovation and investment in science, technology, engineering and mathematics. In the process, it cemented Gurnett’s future research—almost before it had even begun.

“They scheduled the times in the paper where you could go outside and watch it go overhead,” Gurnett remembers. “It was always after twilight when you could see the spacecraft. Sputnik would still be in the sunlight [359 miles up], but it would be dark on the ground. You could see it going overhead, and I remember I was just tremendously impressed.”

Gurnett knew better than most 17-year-olds what it took for the Soviets to put Sputnik I in orbit. Even in high school, he devoured books and articles about rocketry and aeronautics. “I actually built rockets in high school,” Gurnett says. “I got saltpeter, charcoal, and sulfur and I found a formula in a book about ancient Chinese rockets.”

In addition to doing rocket science in his backyard, Gurnett got involved in the local model airplane club. That gang just happened to include German rocket scientist Alexander Lippisch, who invented the Messerschmitt Me 163 Komet, a rocket powered aircraft flown during WWII.

Unsurprisingly, Gurnett was a national model airplane champion in 1956.

But with Sputnik, Gurnett became even more interested in not just airplanes, but missions far outside the atmosphere. He was lucky. In the fall of 1957, scientist James Van Allen was working on instruments that would fly on Explorer I, America’s answer to Sputnik. And he was doing it right at the University of Iowa.

After Explorer 1’s successful launch, Gurnett quickly approached Van Allen, who had just discovered the existence of a radiation belt around the Earth and was being heralded on the cover of Time magazine. “I went over to his office and asked him for a job,” Gurnett says. With his prior experience with radio-controlled model airplanes, he was a shoo-in, and joined Van Allen’s fledgling team as an undergraduate engineer.

“This was kind of just somehow being in the right place at the right time. I worked in high school and made rockets, and less than two years later I was working on real rockets down in Cape Kennedy,“ Gurnett says, marveling even 60 years later at the speed of the shift.

The early years were hectic, and Gurnett regularly put in 80 hours a week at the electronics shop.

“We built quite complicated spacecraft in six months, which is just unheard of these days,” Gurnett recalls. And he would know. Since he joined the space program, he’s been involved in 41 missions—first funded by the Office of Naval Research, and then by NASA. He’s worked on everything from small early satellites to behemoths like Cassini. During the Cold War, his chosen field even allowed him to visit the Soviet Union for international conferences on space and physics.

“It was one of the few areas between the United States and the Soviet Union in those days where there were actual communication. I don’t know that there was any other area of U.S. society that had that kind of contact,” Gurnett says. He made friends with some of his Soviet counterparts (under the watchful eye of KGB agents, of course).

But without a doubt, he says, his favorite mission was the one that launched the Voyager space probes 40 years ago, 20 years after Sputnik 1 beeped its way across the twilit sky in Iowa. Voyager finally reached the outer limits of our solar system just four years ago, passing into the edges of interstellar space. It now takes almost 19 hours for the spacecraft’s signal to reach back to Earth, and it’s growing more distant every day.

“Just think of all the things we’ve done. We’ve flown to every planet in the solar system. There are astronomy books full of things about the other planets and the moons around those planets and how different some of them are from Earth,” Gurnett says. “Space research has just been tremendously successful over the intervening 60 years.”

Gurnett doesn’t anticipate joining any new missions—he’s planning to retire in two years—but he’d like to see orbiters sent to Neptune and Uranus, two planets that haven’t been studied in much detail. And he’d like us to make one more great push: he got to see our first escape from Earth’s atmosphere, and he’d like to witness an attempt to leave our solar neighborhood, too.

“Not in my lifetime, not even anybody’s lifetime are we going to get to a nearby star, but we could get to an interstellar medium if we pushed on that,” he says.

He claims he doesn’t have plans to campaign for an interstellar probe himself, but admits with a smile in his voice that he still loves talking about it.

“If you want a gleam in a scientist’s eye, that’s it for me. Uranus and Neptune orbiters and an interstellar probe,” Gurnett says. Voyager, though it’s still pushing further out of the solar system, will likely run out of power before it escapes its influence. A probe dedicated to exploring the space between the stars might have more luck, if the next generation of rocket engineers can figure out how to get those spacecraft out there. Gurnett notes that those future explorers would have to make a longterm commitment to see the project through. After a lifetime dedicated to space exploration, he knows a thing or two about what that commitment looks like.

While some of his missions, like Voyager, are still going strong, he’s outlived many of the projects he’s worked on—including the tenacious Cassini. He wanted to go to what he referred to as Cassini’s wake, but landed in the hospital the day that spacecraft crashed into Saturn. He’s since recovered and headed back to work.