All the countries (and companies) trying to get to Mars 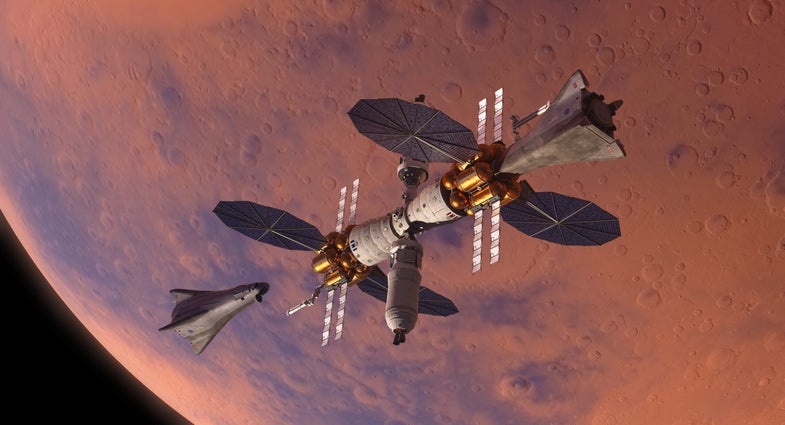 Elon Musk still really wants to put people in a canister, set off a controlled explosion beneath them, and shoot them out of the Earth’s atmosphere towards a barren, airless piece of rock—preferably one 33 million miles away.

On Friday at the International Astronautical Congress in Adelaide, Australia, Musk announced an updated version of his plan to head for Mars, which he previously discussed at the last IAC meeting in Mexico last year.

But he’s not the only one aiming for the red planet.

SpaceX/Elon Musk—Founded by Elon Musk, SpaceX has already managed to make one stage of a rocket reusable, a move that could save costs in the future. Next step: a bigger rocket, and more distant destinations.

How they plan to get there—On Friday, Musk unveiled new plans for what he calls the BFR (“Big F*cking Rocket”). The BFR is about 30 feet across, almost 350 feet tall, and will be propelled into space by 31 methane-fueled raptor rockets. The entire system would be totally reusable, with a spaceship capable of holding 100 people, and a rocket booster that could be used repeatedly. Musk plans for the BFR to replace SpaceX’s other rockets, the Falcon 9 and the yet-to-launch Falcon Heavy.

His (admittedly aspirational) plan is to launch uncrewed rockets to Mars by 2022, and have humans onboard by 2024.

What do they want to do there?—Primarily, Musk and SpaceX just want to get to Mars for the sake of getting there. “Fundamentally the future is vastly more exciting and interesting if we are a space-faring civilization and a multi-planet species than if we are not,” Musk said on Friday. They figure we can come up with useful things to do once we’re capable of getting there.

Mars One—Founded by Bas Lansdorp, the controversial project Mars One intends to send a group of humans to Mars—and leave them there. Plans have been pushed back numerous times, and the most recent timeline indicates that they hope to launch a crew by 2031. That’s nine years later than their initial schedule for launch.

How they plan to get there—Plans aren’t fully in place yet, but the rough idea is that Mars One will send infrastructure—like a rover and a communications satellite—over to Mars first. That would be followed by a human crew, additional supply units, and then still more crew.

Mars One isn’t developing its own technology for the mission. They’ll be using whatever they can purchase from other aerospace companies. They estimate that it will cost six billion dollars to send the first four colonists to mars, and four billion dollars for every mission after that. That’s actually quite low compared to the Apollo Program, which spent about 140 billion in today’s dollars to send 12 people to the Moon, or the Curiosity rover, which cost about $2.5 billion dollars.

What do they want to do there?—Thousands of people signed up for this one-way mission to establish a self-sustaining colony on Mars, with the aim of making humans an interplanetary species.

NASA—the National Aeronautics and Space Administration intends to head out to Mars at some point in the near future.

How they plan to get there—NASA is currently testing the Space Launch System (SLS), a rocket which will be capable of propelling humans and cargo out of Earth orbit. NASA’s new Orion capsule will provide the basis for other, larger deep space exploration vehicles.

Currently, six companies (Bigelow Aerospace, Boeing, Lockheed Martin, Orbital ATK, Sierra Nevada Corporation’s Space Systems, and NanoRacks) are competing for a NASA contract to build some or all of those futuristic spacecraft. Some of those companies are already designing, building or testing technologies like inflatable habitats and futuristic landers.

Also this week, Lockheed Martin unveiled their version of a Mars Base Camp, the company’s vision of a spacecraft capable of sustaining a crew in orbit around Mars, with accompanying landers. That’s one route that NASA could choose to take, but others are sure to crop up as the space agency continues on it’s slow and deliberate trek towards Mars. Unlike private companies, NASA’s incremental—and still nebulous—plans are completely subject to the whims of federal funding.

What do they want to do there?—More so than SpaceX or Mars One, NASA is interested in science. They want to know more about how to get people to Mars, and how to keep them alive once they’re there. That means knowing more about what resources could be found on the surface.

Officially, NASA is looking at putting humans in low-Mars orbit in the 2030’s, and landing people on Mars sometime after that.

UAE—The United Arab Emirates recently announced Mars 2117, their plan to put a human settlement on Mars within the next 100 years.

How they plan to get there—Right now the UAE is taking advantage of their leisurely timeline, gradually building out ideas for what they want to do on Mars when they get there. They are building a massive proving ground, a Mars city in the desert, where they can test technology and building materials before getting to work on the Red Planet.

What do they want to do there?—Like many others, they want to help humanity expand its horizons beyond this planet. But the project is also about being part of something bigger here on Earth as well. The UAE wants to position itself as a scientific leader, and sees this push for Mars as a chance to test and develop new technologies and international relationships in an exciting and inspirational setting.

A few companies still have extraterrestrial ambitions, but haven’t aimed beyond our closest satellites—yet. Russia and China have both expressed interest in returning to the moon, and they aren’t alone.

Moon Express is a private company planning to land on the moon and build an outpost there.

Jeff Bezos, founder of both Amazon and space company Blue Origins hopes to set up a cargo delivery service to the moon in 2020.

There are overlaps between Moon and Mars missions. Last night, Musk lamented the fact that despite it being the futuristic-sounding year 2017, we have no lunar base, and said his BFR could supply connections between the Earth, Moon, and Mars.

And NASA’s current plans are to head for Mars via the moon, or at least a nearby space station—and to do that as cheaply as possible.

There’s a possible link there, too. NASA already contracts with SpaceX for some space station deliveries. By heading to the moon, Musk can throw his rocket in the ring as NASA decides on contractors for future missions.

Whether we head for the Moon, or Mars, or the Moon and then Mars, one thing is certain: Humankind is on an epic mission to head anywhere but here.