Whose is bigger? How all the Mars-bound rockets stack up

A power trip to the red planet. 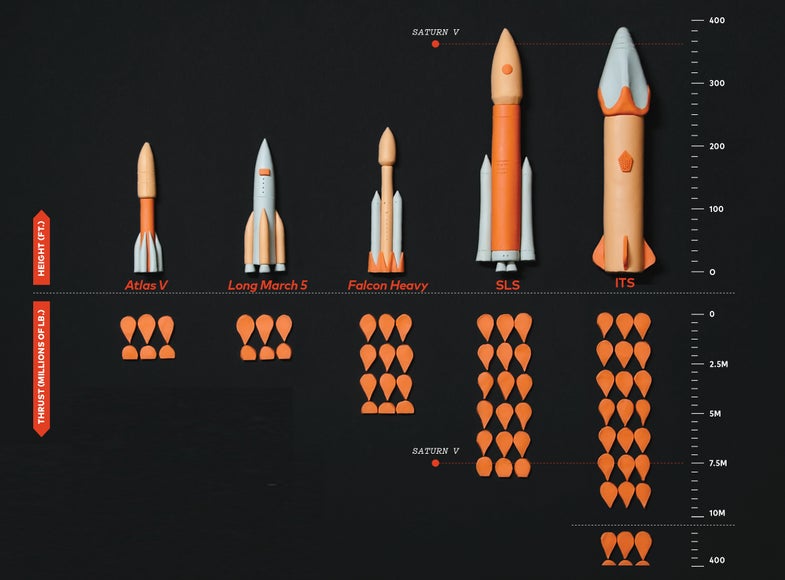 Like everything else in the 1960s, NASA’s Saturn V rocket set a mark for extreme. At 363 feet tall, with 7.5 million pounds of liftoff thrust, it lifted six moon-bound missions into space. Retired in 1973, it remains the tallest, heaviest, and most powerful rocket our species has ever built. With moon missions on hold, we haven’t needed anything close to its capacity. Until now. As governments and private companies race to send astronauts to Mars, bigger is once again better—and necessary. Whose heavy-lifter is the biggest and baddest? Here’s how they stack up.

In 2011, United Launch Alliance’s Atlas V lifted off with the largest thing that’s ever landed on Mars—NASA’s one-ton Curiosity rover. In 2020, it’ll carry Curiosity‘s cousin. Having safely launched to Earth orbit and beyond 71 times, the Atlas V is ­ultra reliable.

China has been slow to the space race, but it is catching up fast. Its most powerful rocket to date, Long March 5, will deliver a Chinese space station—plus astronaut inhabitants—into Earth orbit, and send the nation’s first rover to Mars by 2020.

Falcon Heavy, debuting this year, can lift twice as much weight as any current rocket. It may launch a Mars capsule as soon as 2020, followed by crewed missions six years later. If that’s the case, SpaceX might beat NASA to putting bootprints in red dust.

The first rocket to surpass Saturn V ‘s strength is slated for takeoff next year. SLS will carry astronauts into lunar orbit a few years later, then bring NASA’s first crews to Mars in the 2030s. Or 2040s. It’s rocket science, so who knows.

If built, the ITS will be the largest rocket the world has ever seen, capable of carrying 100 settlers to the red planet. This colonization mega-ship could launch in 2024, or so SpaceX hopes—it will need funding first.

This article was originally published in the May/June 2017 issue of Popular Science, under the title “The Titans of Mars-Bound Travel.”