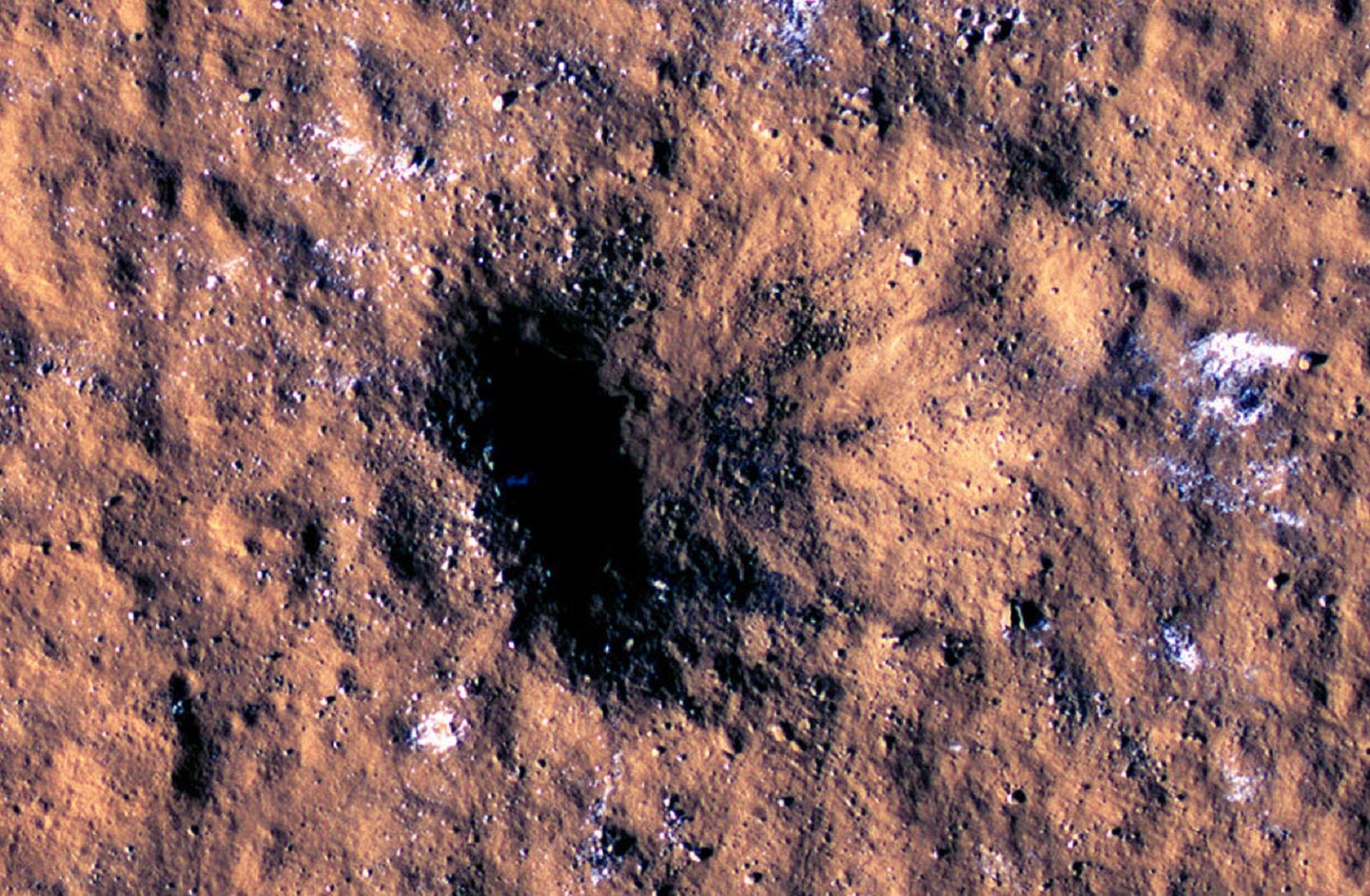 Boulder-size blocks of water ice can be seen around the rim of an impact crater on Mars, formed Dec. 24, 2021, by a meteoroid strike. The high-res image was captured by Mars Reconnaissance Orbiter. NASA/JPL-Caltech/University of Arizona
SHARE

Space agencies like NASA keep a close watch on our nearest neighbor, Mars. With almost a dozen active missions on or around the Red Planet, they can track its daily weather, just like our forecasts here on Earth, and notice even small changes on its surface.

Today, though, astronomers revealed a much bigger change: two new large impact craters in the Martian crust, observed by both the Mars Reconnaisance Orbiter (MRO) and the InSight lander. These are the largest impact craters discovered by MRO to date and the first detection of seismic surface waves, according to two new studies published in the journal Science.

“We never thought we’d see anything this big,” said Ingrid Daubar, planetary scientist at NASA’S Jet Propulsion Lab and MRO/InSight team member, in a NASA press conference on the new findings. Quakes on Mars, like those resulting from these meteor impacts, reveal more detailed information on its contents, and how rocky planets, including Earth, came to be.

Here at home, we’ve been measuring earthquakes for centuries—but marsquakes are newer territory. The InSight mission, which landed on Mars in 2018, recorded its first marsquake less than a year into its operations and has since recorded more than 1,300 of them. The lander provides NASA and other research teams a unique opportunity to understand what’s going on under the Martian surface, and study its core, mantle, and crust in detail. To fully understand how rocky planets like Mars and Earth form, we need more information on exactly how they’re structured—information that InSight aims to provide. MRO, which has been orbiting around Mars for 16 years, provides detailed images of the surface for birds-eye-view context for observations taken on the ground.

Mars has plenty of quakes caused by its own seismic activity, but without a thick atmosphere to protect it like Earth, astronomers also expect meteors to hit the surface and cause additional waves. The first of the newly detected impacts, known as S1000a, happened in September 2021, and created a cluster of craters in an area of rocky, craggy terrain to the North of Mars known as Tempe Terra. The second impact, called S1094b, hit in December 2021, and was much closer to InSight. It impacted a flat, dusty region on Amazonis Planitia, and formed a larger crater 150 meters in diameter—a distance comparable to the height of the Washington Monument. This created an approximately magnitude 4 quake, which is fairly small by Earth’s standards, but large for our less tectonically active neighbor.

Both of these detections were true displays of teamwork between the various missions. For S1000a, InSight noticed the seismic signatures, and scientists used that to direct MRO’s search to image the crater. For S1094b, on the other hand, the MRO team independently noticed the freshly formed crater, and collaborated with InSight researchers to confirm that the two spacecraft’s seismic signatures were, in fact, from the same event. The impact was large enough that it could even be seen in MRO’s daily weather camera, MARCI, allowing its team to pinpoint the timing of the impact to within a day. From these visuals, they estimated that the meteor that struck Mars was around 5 to 12 meters across, somewhere between the length of a giraffe and a telephone pole.

When quakes happen on a rocky planet, the waves bounce around in different ways depending on the materials they encounter. So far, all the quakes observed by InSight have been characterized as body waves that travel deep within the planet’s mantle. Any major event—volcanoes, earthquakes, landslides, etc.—sends both body waves and shallower surface waves rippling through a planet. This left astronomers wondering about Mars’ crust.

They finally got a clue with the meteor impact last December. S1094b created large waves that traveled through the crust, making it possible for InSight to measure them. Doyeon Kim, senior research scientist at ETH Zurich and lead author of one of the new studies, says that these kinds of detections, called surface waves, “were already a part of the mission goals of InSight from the beginning.” This marks the first unambiguous detection of surface waves on any planet other than Earth, and revealed that Mars’ crust may be a bit more uneven than previously thought.

Images of S1094b from MRO’s HiRISE also show peculiar lighter patches on the Red Planet’s surface around the new crater, which the team identified as frozen water dredged up from below the crust upon impact. We’ve known Mars has ice caps for a while, but this is the lowest latitude that ice has been observed at so far. What’s more, the combination of imaging and seismic data gave the researchers particularly precise measurements of the location of the impact and the path the seismic waves took through Mars, providing information on the properties of the rocks along those paths.

This groundbreaking combination of observations opens the door for a much more detailed understanding of Mars and other rocky planets, from the physics of meteor impacts to the structure of planetary interiors and beyond. Unfortunately, this may be InSight’s last hurrah—dust has been slowly covering its solar panels for months, and in around four to eight weeks it will no longer have enough power to operate. The team sees this as a high note to end on: Their observations could pave the way for fresh discoveries on Mars.

“The new results on crustal structure far from the InSight landing site will improve our overall understanding of the formation and evolution of the Martian crust,” says Martin Knapmeyer, planetary scientist at the German Aerospace Center (DLR) in Berlin. “In a cooperation kindled by a common goal, international science teams of two different Mars missions joined efforts to obtain the best possible results.”