This is InSight’s first detection of impacts since landing on Mars in 2018. 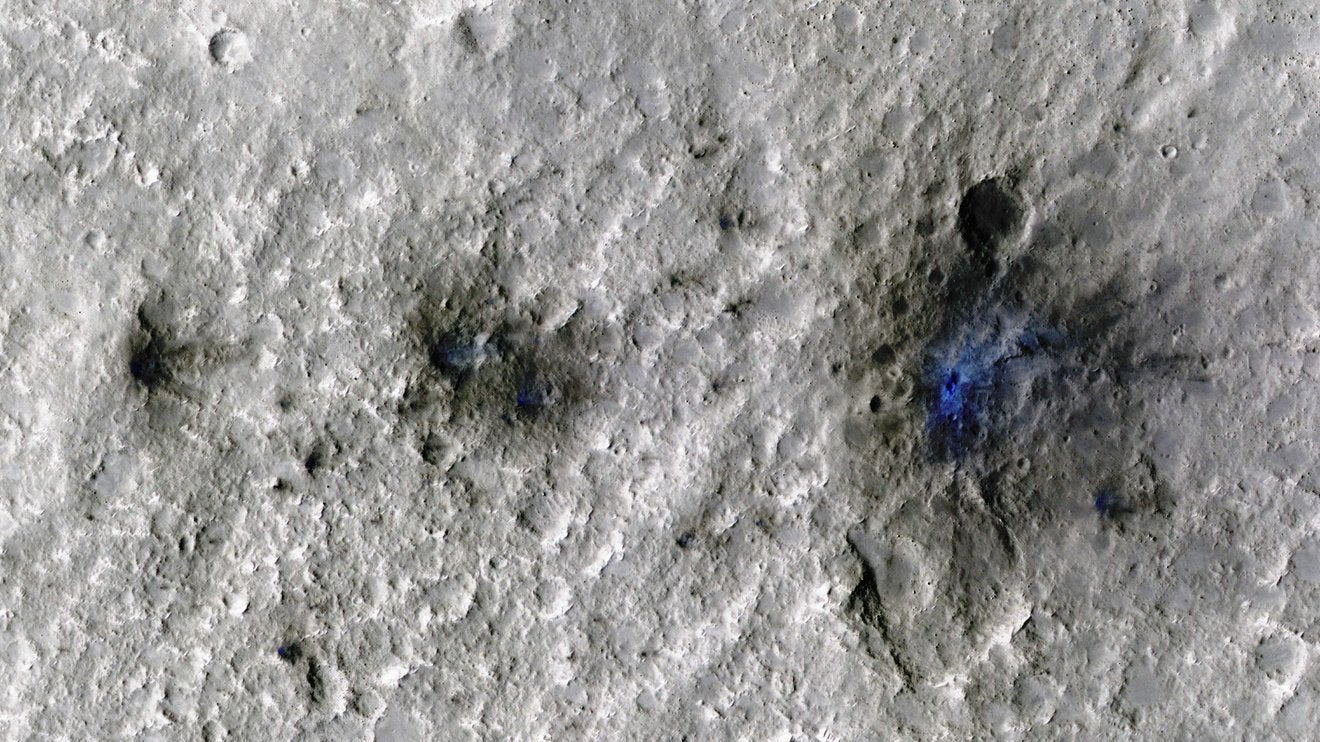 Craters formed on September 5, 2021 by a meteoroid on Mars. NASA/JPL
SHARE

If a meteoroid crashes into a planet, and no one is around to hear it, does it make a sound? Well, if NASA’s Mars InSight lander is near by, it just might pick it up. The spacecraft has detected the seismic waves from four space rocks that crashed on Mars in 2020 and 2021. These are the first impacts detected by InSight’s seismometer since it landed on Mars in November 2018 and marks the first time seismic and acoustic waves from an impact have been detected on the Red Planet.

A paper published this week in the journal Nature Geoscience details the Martian impacts, which ranged between 53 and 180 miles from InSight’s location. InSight is in a region of Mars called Elysium Planitia, a smooth flat land just north of the planet’s equator.

The first of the four confirmed meteoroids (a space rock before it hits the ground) made the most dramatic entrance, according to NASA. It entered Mars’ atmosphere just over a year ago on September 5, 2021 and exploded into at least three shards that each left a crater behind.

[Related: NASA’s new Mars lander is in for ‘seven minutes of terror’ on Monday.]

To confirm the location, NASA’s Mars Reconnaissance Orbiter flew over the estimated impact site and used its black-and-white Context Camera to reveal three darkened spots on the surface. After locating these points of impact, the orbiter’s team used the High-Resolution Imaging Science Experiment camera (HiRISE) to get a color close-up of the craters. While it is possible that the meteoroid could have left additional craters on the planet’s surface, they would be too small to see in the images taken by HiRISE.

NASA released a recording of the Martian meteoroid making impact, where Star Wars-esque “bloop” sounds are heard three times as the meteoroid enters the atmosphere, explodes into pieces, and slams into the surface.

“After three years of InSight waiting to detect an impact, those craters looked beautiful,” said Ingrid Daubar of Brown University, a co-author of the paper and a specialist in Mars impacts, in a press release. The team confirmed three other impacts had occurred. One on May 27, 2020 and two others on February 18 and August 31, 2021.

Mars is right next to our solar system’s main asteroid belt, which caused researchers to wonder why they haven’t detected more of these meteoroid impacts on the Red Planet. More meteoroids pass through Mars’ atmosphere without disintegrating since it is only about one percent as thick as Earth’s.

InSight’s seismometer, was provided by French space agency the Centre National d’Études Spatiales (CNES), has detected over 1,300 marsquakes. CNES is one of a number of European partners supporting on the InSight mission, including the and the German Aerospace Center (DLR).

The seismometer is so sensitive that it can detect seismic waves from thousands of miles away. The dramatic meteoroid that hit Mars in September 2021 marks the first time an impact was confirmed as the cause of the seismic waves. InSight’s team suspects that noise from wind or by seasonal changes in Mars’ atmosphere may have obscured the noise from other impacts. Scientists expect to find more hiding within InSight’s nearly four years of data, now that the seismic signature of an impact on the Red Planet has been discovered.

[Related: NASA has officially detected ‘marsquakes’ on the Red Planet.]

Scientists are looking at Martian seismic data for clues that will help them better understand the planet. Most marsquakes are caused by subsurface rocks cracking from heat and pressure, and studying how how the resulting seismic waves change as they move through different material will help scientist study Mars’ crust, mantle, and core. The four confirmed meteoroid impacts produced small quakes (no more than a magnitude of 2.0). Those smaller quakes provide scientists with a glimpse into the Martian crust. However, the seismic signals from larger quakes (a magnitude 5 event occurred in May 2022) can tell scientists more about Mars’ mantle and core.

These impact events will also be critical in refining Mars’ timeline and history. “Impacts are the clocks of the solar system,” said French lead author Raphael Garcia of from the Higher Institute of Aeronautics and Space in Toulouse, in a statement. “We need to know the impact rate today to estimate the age of different surfaces.”

InSight’s data will help researchers analyze the trajectory and size of the shock wave produced when the meteoroid enters the atmosphere and once it hits the ground. “We’re learning more about the impact process itself,” Garcia said. “We can match different sizes of craters to specific seismic and acoustic waves now.”

The lander’s mission is rapidly coming to an end, as dust buildup on its solar panels is reducing its power will eventually lead to the spacecraft shutting down. According to NASA, predicting precisely when it will shut down is difficult, but based on the latest power readings, engineers believe the InSight lander could shut down between October 2022 and January 2023.