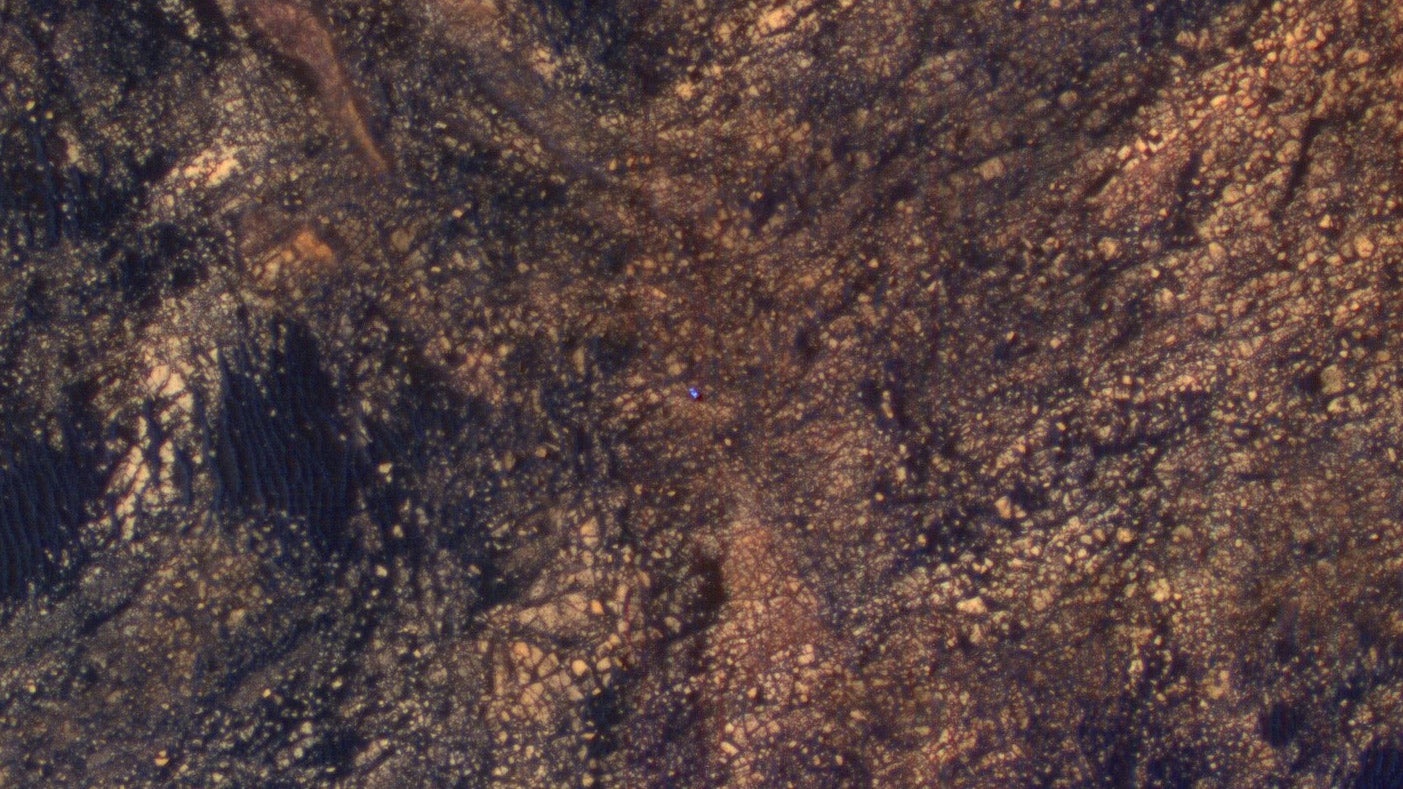 One of the most awe-inspiring images of Earth is the photograph “Pale Blue Dot”, taken by the Voyager 1 spacecraft as it sped billions of miles away from our planet. And Carl Sagan’s reflection on the image is perhaps one of the most poignant bits of science writing ever produced.

So it seems only right that a similarly sentimental picture of NASA’s Curiosity rover appears to show another pale blue dot in action—thanks to exaggerated color, anyway. The intrepid space explorer, which will celebrate its fifth anniversary on Mars in August, is roughly the size of a car. But the Mars Reconnaissance Orbiter (MRO) is nearly 200 miles above the red planet’s surface, so Curiosity looks oh-so-smol.

For some of you, this may just look like a really-not-great photo of a space robot. After all, we see close-up selfies of Curiosity all the time. But for those of us who have a tendency to anthropomorphize our beloved spacecraft, it’s a powerful photo. She’s working so hard! Look at her making her way up Mount Sharp, looking for signs of ancient microbial life as her wheels start to slowly break down. And she looks so lonely!

Curiosity isn’t the only robot living on Mars—there’s the MRO hovering above, of course, and NASA’s older Opportunity rover has turned a 90-day mission into 13 years of scientific research—and counting—but it’s not like the crafts get to meet up to take selfies together. Curiosity and Opportunity are basically on opposite sides of the planet. In fact, Curiosity’s closest robotic neighbor is the sadly deceased Spirit rover.

But wait, you say. These are just robots. But wait, we say. Shut up.

Anyway, the MRO’s enhanced color images usually have a much more important job to do: these photographs reveal the incredible geological features of the Martian surface. Check out some recent examples below:

Like the impossibly-long-lived Opportunity rover before her, Curiosity seems set to continue her tenure on Mars for quite some time. The MRO, which has been in orbit since 2006, does not have an end date on the books—it too has long outlived its primary mission. What did we do to deserve these space robots, you guys?