Sorry, there’s probably no water under the South Pole of Mars

It might just be clay (not water) under Mars’ South Pole. 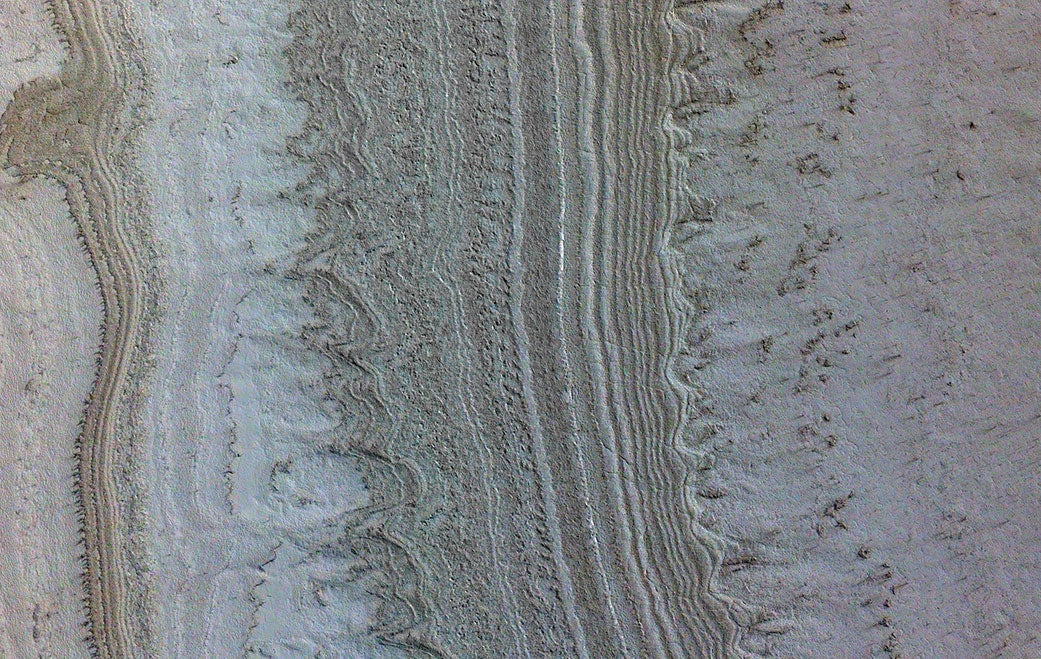 Mars may have clay under its South Pole, not liquid water, as some researchers previously suspected. After years of scientific mystery, a new study is one of three recent works that give evidence for alternate explanations to the Martian lakes hypothesis.

In 2018, an Italian team of researchers noted that the unusual way radar bounced off a region of the Red Planet might be explained by an underground lake about twelve miles in width and one mile below the surface of the Planum Australe region, near Mars’ South Pole.

“Almost immediately, though, the skepticism in the science community started showing up,” says Isaac Smith, a planetary scientist at York University in Toronto, Canada, who led the new study, published in the Journal Geophysical Research Letters. Smith’s study doesn’t discount the possibility of liquid water anywhere under Mars, and good evidence confirms that frozen water likely exists on the red planet, but Smith says current models of Mars suggest that the temperature one mile below the planet’s south pole is too cold for liquid water.

The 2018 findings made a big splash, but they weren’t definitive, and follow up works by various groups have pointed out issues with the idea, suggesting it was indeed unlikely that an entire lake could remain liquid so far from the warmth of the core. A lake would require some pretty unlikely circumstances—namely a heat source or, if not, then a tremendous amount of salt to help lower the freezing point of underground water. But the amount of salt required would be gargantuan, Smith says.

One study, published in 2019, found that regardless of how salty the underground lake is, it would require a heat source—like nearby magma—to stay liquid. And a more recent study by NASA’s Jet Propulsion Laboratory scientists showed that these radar spots show up in many other locations—making it less likely that each spot would have both a heat source and plentiful salt.

As enticing as it would be for there to be water under Mars’ South Pole, Smith acknowledges, he thinks clay is more plausible, largely because it requires “no caveats”, he says, like underground heat sources and dense salt pockets.

In February, Smith was working on a different project, studying the clay found in Mars’ massive “Grand Canyon” called Valles Marineras. They measured electrical properties of wet and dry clays in the lab to see what kind of radar signal a spacecraft might see from them. Smith and his team realized that frozen, wet clay would reflect radar in a way similar to water. “That would answer the lake question right away,” he says.

Smith’s study had three components. First, the lab measures which showed how clays would appear to radar, computer modeling, and a hunt for smectite minerals near the South Pole, which the team found using data from the Compact Reconnaissance Imaging Spectrometer for Mars, an instrument onboard the Mars Reconnaissance Orbiter spacecraft.

Smectites are a type of clays which are abundant on Mars and on much of Earth. They form when volcanic rock gets weathered in the presence of water. “One of the first things that forms is a smectite,” Smith says. “And then after that, it’ll continue breaking down and you’ll get different types of clays,” eventually becoming a clay similar to what you would use for pottery.

On Earth, you can find smectites in places like Costa Rica and Alaska and the Curiosity rover has found them in thick deposits in Gale Crater on Mars, Smith says.

But Elena Pettinelli, a geophysicist at the Roma Tre University in Italy and one of the authors of the original 2018 study isn’t convinced clay is the answer and still sees water as a plausible reason. She thinks water with perchlorate salts could stay at very low temperatures in what’s called a metastable state. Pettinelli is also concerned that Smith didn’t account for temperature thoroughly enough. He measured the properties of clays at a temperature of 230 Kelvin and modeled them at 175 Kelvin; she says that these properties “are really strongly dependent on temperature” and a difference in temperature could completely change the type of radar reflection the clays are able to produce.

She also says his laboratory measurements for clay disagree with previous studies that have found cold clays to have a weak radar reflection, which would mean they wouldn’t produce a signal like liquid water.

The last of the three studies to come out recently on Martian lakes was led by Carver Bierson, who used modeling to independently come to similar conclusions as Smith. Bierson’s team found that clays, metal-bearing minerals, or salty ice might create similar signals to underground liquid water on Mars.

If the underground lakes are indeed clay, there’s now “more evidence that it rained at the South Pole,” Smith says, because when you find clays, you know that there was liquid water there at some point because clays don’t form without it.

The research doesn’t prove anything definitive yet, but Smith isn’t surprised. “Science is always trying to get closer to the answer.” It isn’t infallible, and no one knows the precise answer yet, Smith says, but, “This is a step towards the right answer for Mars.”