Saturn has a slushy core and rings that wiggle

Astronomers used the rings as a seismograph to peer inside the planet’s core. 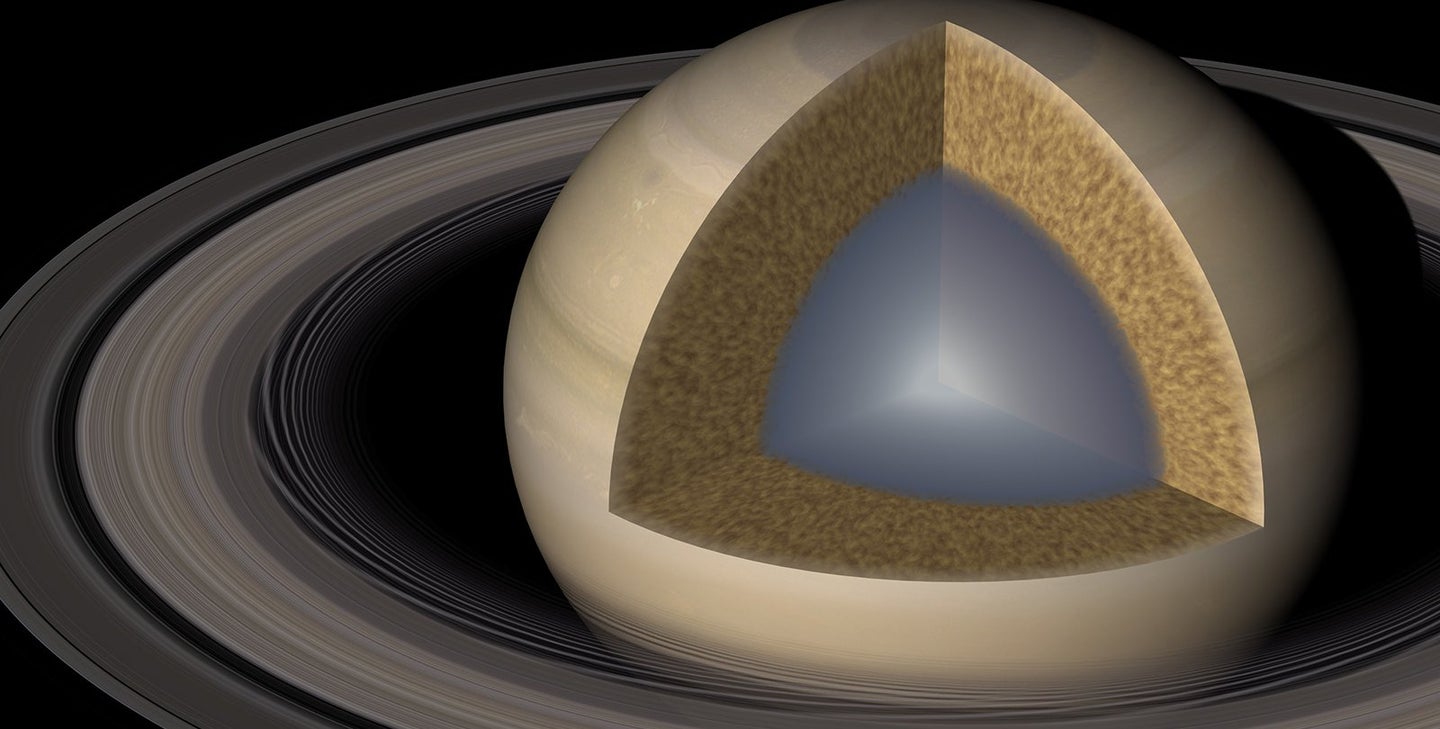 In the past, astronomers believed Saturn had a rocky core hidden at the center of its mostly gaseous mass. But new research shows that, rather than a solid chunk of rock, Saturn’s heart is a “slushy” and “fuzzy” mixture of ice, rock, hydrogen, and helium.

Constant trembling in Saturn’s body causes its rings to wiggle in waves that can be detected as seismic signatures. Using data from NASA’s Cassini spacecraft, which recorded these signatures back in 2013, planetary scientists used those measurements to peer inside the gas giant’s center. The numbers told them that Saturn’s middle must be a diffuse core, approximately 60 percent of the planet’s radius, containing 17 Earth masses of ice and rock. The paper was published in Nature Astronomy.

“Saturn is always quaking, but it’s subtle,” Christopher Mankovich, a planetary scientist at The California Institute of Technology and lead author of the paper, said in a statement. “The planet’s surface moves about a meter every one to two hours like a slowly rippling lake. Like a seismograph, the rings pick up the gravity disturbances, and the ring particles start to wiggle around.”

This research technique is called “kronoseismology,” from the Greek words “kronos”  (meaning Saturn) and “seismo” (meaning quakes). Kronoseismology is how astronomers figured out that a Saturnian day is precisely 10 hours and 33 minutes. By looking at the small waves and tremors of Saturn’s rings, astronomers could deduce the movement of the planet’s body in a way they couldn’t before, which enabled them to calculate its rotation speed and determine the length of its day.

[Related: Is something burping methane on Saturn’s ocean moon?]

Saturn’s center is what scientists call a “fuzzy core,” because of the way its density increases gradually towards the center. “The conventional picture has it that Saturn’s interior has a neat division between a compact core of rocks and ices and an envelope of mostly hydrogen and helium,” Mankovich told Gizmodo. “We found that contrary to this conventional picture, the core is actually ‘fuzzy’: all those same rocks and ices are there, but they are effectively blurred out over a huge fraction of the planet.”

Planetary scientists could use these methods to examine the rings of other planets like Uranus and Neptune, peeling back mysteries at their centers.

These findings also provide more clues to how Saturn was first formed. Some older theories suggest that gas giants are a product of rock and ice aggregating as it circles the Sun, gathering a cloud of solids and, later, gases like hydrogen and helium over eons. But newer theories say that gases and solids mixed and accumulated in tandem to form the ringed planet.

By showing that the transition from denser center to more gaseous outer layer is smooth rather than abrupt, the new paper supports that latter theory, Nadine Nettelmann, a planetary scientist at the German Aerospace Center in Berlin who was not involved in the study, told Science News. And while she thinks more of Saturn’s rings need to be analyzed to confirm the findings, Nettelmann said, “I find the conclusions very important and very exciting and the line of reasoning very convincing.”