InSight will tell us about the planet's interior, but it's got to stick the landing first. 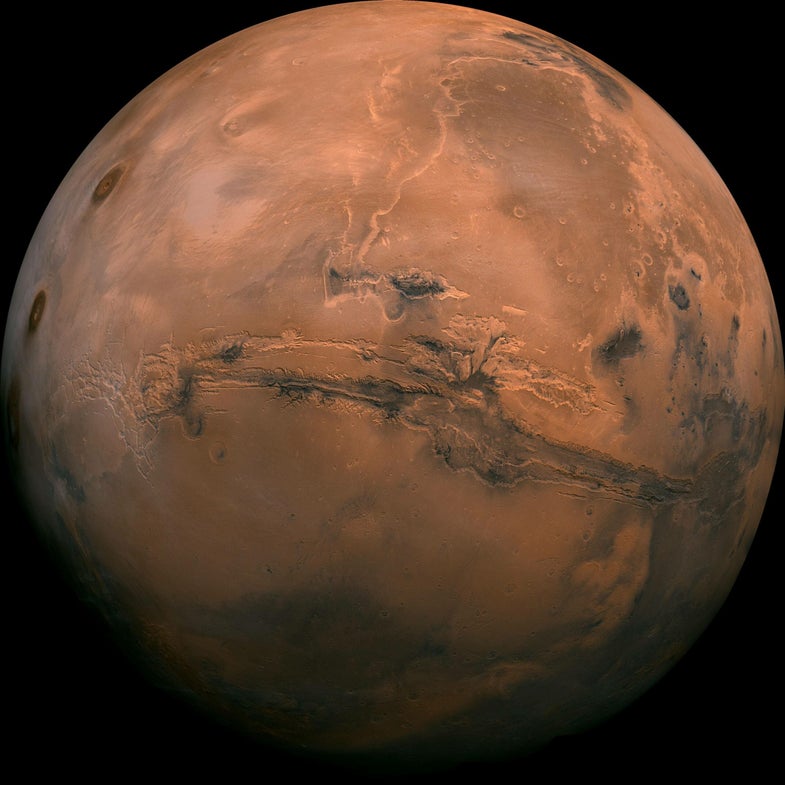 It has been six years since NASA landed a spacecraft on the surface of Mars, but that’s about to change. On November 26 a new mission called InSight will attempt to enter the thin Martian atmosphere and land in a region called Elysium Planitia, just north of where the Curiosity Rover roams. Unlike other Mars missions—landers and rovers sent to drive around sandy craters or study surface features—InSight will be the first spacecraft to spend its time on Mars observing the inner workings of the planet.

There’s a lot on the Martian surface that is of interest to scientists, but little is known about what is happening on the inside. We don’t exactly know what the planet’s core is made of, how big it is, or how geologically active Mars might be. In order to understand these mysteries, we have to look below the surface. That’s InSight’s speciality.

But first the lander has to survive the “seven minutes of terror” during atmospheric entry, descent, and landing (otherwise known as EDL). “We’re really excited,” says InSight Project Manager Tom Hoffman. “There’s nothing as exciting as landing on Mars. So far we are in good shape. We’ve basically done everything we can to be ready.”

Before InSight officially begins its EDL to Mars, its team back on Earth has to make sure every possible scenario is covered.

How InSight will go down

Around 24 hours before EDL is when the team at NASA’s Jet Propulsion Laboratory will make their final correction maneuvers. In order for EDL to go smoothly, the spacecraft has to hit the atmosphere at the exact right angle. Too steep and it’ll vaporize and burn up faster than you can say OH NO, too shallow and it’ll bounce off the atmosphere and float into space.

A few days before landing and up until 22 hours prior to EDL, NASA’s Deep Space Network will help track the spacecraft using doppler shifts. This is the last opportunity to issue commands to correct InSight’s trajectory.

The final countdown to EDL begins around 9 a.m. Pacific time, three hours before the spacecraft meets Mars. This is when the Deep Space Network will begin using a method of tracking called DELTA DOR: large antennas on Earth track the spacecraft in tandem, with scientists noting the delay in signal return between the two to precisely locate the object. To correct for any errors due to atmospheric conditions, space weather, or tiny interferences on the ground, NASA will also have the antennas measure a quasar—an extremely bright galactic nucleus. We’re very certain of how far away these luminous objects are, so pinpointing their radio sources in tandem with the radio source from a Deep Space Network antenna tells NASA the exact whereabouts of the spacecraft.

Around 10 minutes before EDL, InSight will release its cruise stage. This is the protective cover that has been housing the spacecraft since launch. Once that’s gone, it’s time for seven minutes of terror. Here’s what InSight has to accomplish before mission control can breathe easy:

In order for us to know if a mission has touched down safely, we usually need a communication satellite overhead at just the right time to send data back to Earth. But InSight brought its own. It’s the first planetary mission launched with two personalized communication cubesats, MarCO A and MarCO B (or “Marco/Polo,” as the folks in mission control call them). These cereal-box-sized satellites will serve as a “bent pipe” relay for the seven minutes of terror. As the spacecraft completes each task, from cruise stage release to firing thrusters, it will be sending data to the MarCO pair—which will immediately relay the information to the Deep Space Network and mission control at JPL.

There’s a time delay on that data, so if InSight doesn’t land, it’ll take eight minutes for mission control to find out. But the team is optimistic. And almost immediately after landing InSight will take its first image and send it back to Earth, although it’s likely to be quite dusty looking: fine grains of dirt kicked up by the touch-down will still be floating around.

“Once we get an indication that we’ve landed successfully and get that first image back, the people that work EDL and the navigation team will go off and celebrate,” Hoffman says. “But the rest of us have to start the science part of the mission: the whole point of landing on Mars is to do the cool science.”

After InSight lands, takes a photo of its surroundings, and provides a good survey of the ground near the lander, the team is tasked with a miniature version of EDL all over again. Unlike other landers that have their instruments engineered as a part of the chassis, InSight carries scientific tools on its deck, and will have to use an articulating arm to pick them up, move them out, and slowly set them down on the surface of Mars. This has never been done on another planet before, and the process will take around three months. For now, though, let’s focus on landing the robot itself. Success is far from guaranteed.

“Anytime you can successfully land on Mars, that is very exciting, because the overall international success rate is not high,” says Hoffman. “It’s about 40 percent—it’s always a challenge.”

Keep up with InSight’s terrifying descent by checking back in on November 26, when Popular Science will be at NASA’s Jet Propulsion Laboratory in Pasadena to witness the landing first-hand.

Correction: A previous version of this article made an incorrect reference to the speed of sound. We regret the error!