Marsquakes Could Be The Key To Life On Mars

New research hints at how hydrogen ends up in rocks 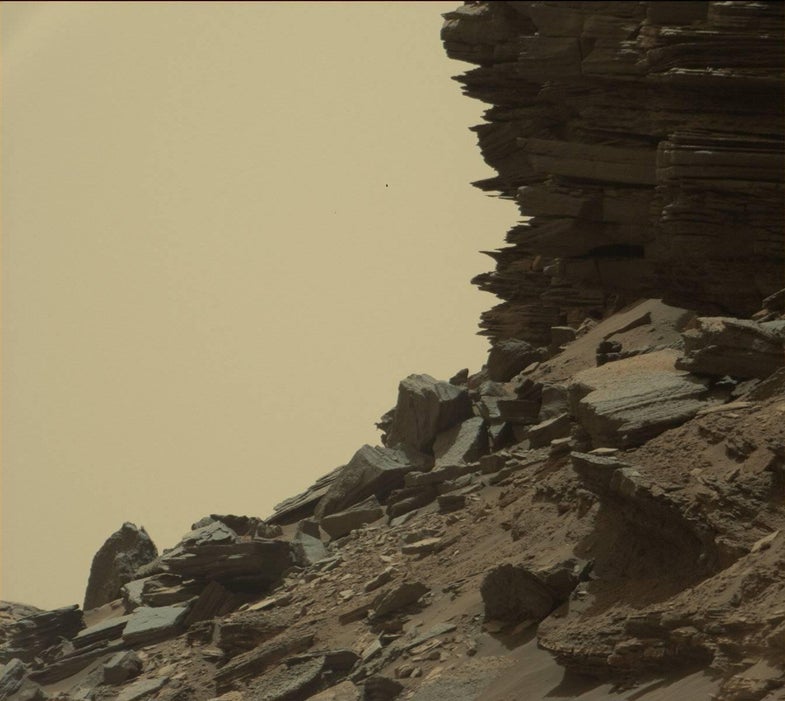 Landscapes on Mars as seen by the Curiosity Mars rover. NASA/JPL-Caltech/MSSS
SHARE

Quakes on Mars could have helped the tiniest forms of microbial life survive beneath the planet’s surface. New information about how hydrogen is formed in rocks here on Earth by seismic activity hints that the same processes may have taken place on the Red Planet.

As one of the building blocks for life, hydrogen would be an exciting find on Mars, to say the least. It’d also provide some interesting conversation on whether terraforming the planet, as SpaceX recently hinted at accomplishing, would be a viable route, ethically and practically.

Yale geologist Sean McMahon, John Parnell of the University of Aberdeen’s School of Geosciences, and Nigel J.F. Blamey at Brock University investigated sources of hydrogen in the Earth’s subsurface, by analyzing rocks in Sudbury, Scotland and South Africa. The geologists found that friction in earthquakes produces hydrogen–tipped off by earlier studies describing experiments that predicted hydrogen production during earthquakes, according to McMahon. They furthered this work to see if rocks from faults retained any of this extra hydrogen. They were surprisingly hydrogen-rich, and when they rubbed during an event like an earthquake or meteorite collision, the hydrogen escaped from pockets that had formed in the rocks.

“We do not know if life exists or whether it existed in the past,” Blamey told Popular Science. What we do know: life as we know it would need energy and water to survive. This study focuses on “identifying hydrogen that could potentially act as an energy source if life was or is there.”

Any rocky planet with seismic activity could see the same result. Mercury was just found to be tectonically active. But the jump from this big blue rock to the red one we’ve recently heard a lot about was easy. “It is known that Mars has a low level of seismic activity, so it was a simple extrapolation,” McMahon told Popular Science. “All that is required is for rocks to grind together on a fault.”

What about the life that’s hoping to show up on Mars in the mid-2020s? Could the hydrogen slipping through the cracks be converted into fuel or energy for Martian explorers in-situ? Eh, not quite. The amount produced in seismic activity is enough to potentially support the tiniest organisms, but it’s still miniscule. “Although H2 is a useful resource, it will be easier to obtain on Mars by the electrolysis of water,” McMahon notes.

“There is too little to help provide an energy source for a future manned mission to Mars, but there could be sufficient to support microbes,” Blamey says. “Until life is confirmed on Mars, we will not know the answer.”

We could get those answers in 2018, when NASA sends its InSight lander to drill and analyze Martian soil. Seismology’s on the short list of things for the lander to to study.

“Evidence for Seismogenic Hydrogen Gas, a Potential Microbial Energy Source on Earth and Mars” is published in the September 2016 issue of Astrobiology.