The genes behind your fingerprints just got weirder

The whorls, arches, and loops on your fingertips can say a lot about your early development. 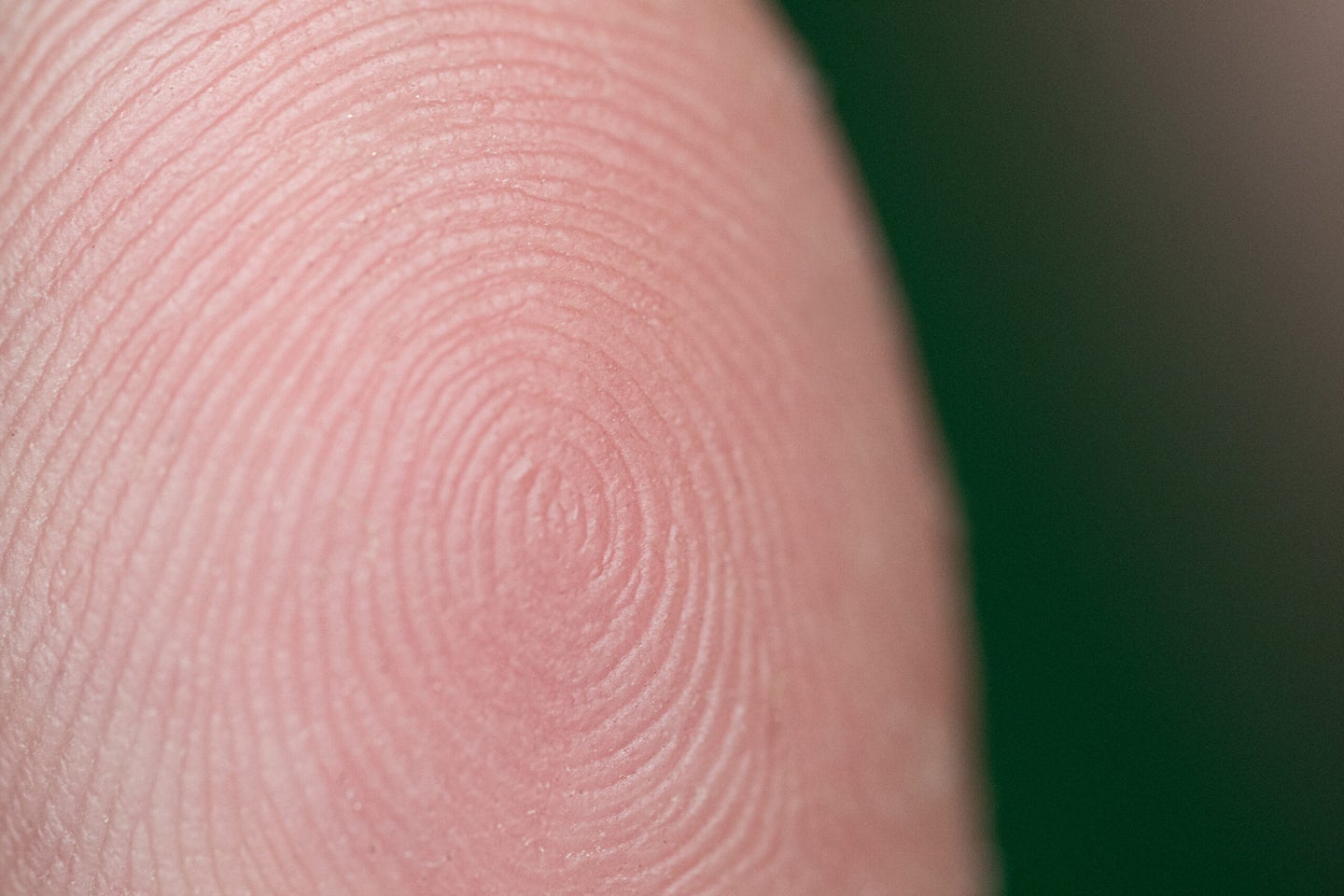 Mapped across our fingertips is a diverse, intricate landscape. The swirling maze of tiny ridges, peaks, and valleys are used to help us flip pages of a book, feel and distinguish textures, and unlock our phones. But it turns out that fingerprints are not only unique signatures of our identity; they are signatures of our early stages of development.

A recent study published in the journal Cell reveals that genes involved in limb development are influential in creating the shape of our fingerprints. Previously, researchers thought the genes active in skin formation were the most obvious connection to fingerprint patterns.

“Fingerprints are an interesting feature of human biology that have been used for a number of practical purposes like individual identification and, more in the past, diagnosis of conditions,” says Denis Headon, a coauthor on the study and developmental biologist at the University of Edinburgh, who investigates the genetics of structure variations on skin in different species, like hair, feathers, and scales. “I think what we’re getting here is an insight into how the variation in fingerprints is arising and how it’s got to do with limb development processes.”

[Related: CRISPR breaks ground as a one-shot treatment for a rare disease]

Early skin of an embryo is quite simple, Headon explains. On different regions of the body, the embryonic skin will develop hair follicles, teeth, or in this case, fingerprint ridges on the soles of the feet and palms of the hands. In a large DNA analysis of more than 23,000 people across ethnic groups, Headon and a team of international researchers explored the genetic underpinnings of the unique variations in the trait.

The uniqueness of a fingerprint can trace back to some very fine features. One example is the exact positions of the ridges that run across the finger pads, says Headon. “You can get a split in the ridge, where it bifurcates into two—or a ridge can just stop. Sometimes you get very short ridges, like little islands.” Although not studied in this paper, sweat glands that decorate the tops of ridges also influence their path, Headon adds. However, many of our fingerprints generally fall under three common patterns: whorled, arched, or looped.

“You can have more complicated prints with double whorls, you can have complex loops, but they still fall into these categories, arch, loop and whorl. And that’s what we’ve studied here with genetics,” Headon explains.

The team assessed DNA from their volunteers to find the genetic basis of these patterns, looking for a specific balance of genes that shift the chances of having an arch versus a loop versus a whorl. What they found was that many of the genes that underlie the formation of the three patterns were not primarily linked to skin formation but rather limb and finger formation. To test out this finding, the researchers homed in on EVI1, a known limb-development gene in humans that influences the three middle digits of the hand. They decreased the expression of EVI1 in mice, which don’t have fingerprints but do have distinct ridges that run across parts of the digits, and saw that the individuals with the altered gene also had changes in the ridge patterns. “It’s subtle … but we can see a shift in the shape of those transverse ridges,” Headon says. “This supports the idea that EVI1 is the gene responsible for influencing fingerprint typing in humans, as well as these simple ridges that we see in mice.”

What this is telling us [in humans] is that the distinction between arch, loop, and whorl is coming about from how the limb is growing and being shaped, and particularly how the fingers are being shaped and growing, in utero prior to birth.”

An embryo’s limbs start growing around week five of development. As different boney elements and parts of the digits in the hand begin to take shape, the genes that form limbs and also determine fingerprint patterns are already in action much earlier than the print begins to appear, Headon explains. Around week 8 to 10 of development, the hands and feet develop volar pads—temporary thick skin on palms and soles that are particularly prominent while fingertips and toes develop. Most humans lose their volar pads before birth, but some animals retain them, like primates. The bulbous pad “looks almost like a frog’s hand,” says Headon.

“It was suggested in the 20th century that the shape of these pads—the height of them, the specific shape of them, and their size—influence where what type of fingerprint forms,” Headon explains. The team’s analysis indicated that finger length is genetically linked to the fingerprint patterns. So, the researchers infer that finger length and volar pad’s size, position, and formation all contribute to the resulting fingerprint arrangement. “The genetic influence on arch, loop, and whorl distinction is coming in at that earlier stage of building that field where the fingerprint will form.”

The genes steering fingerprint formation can be helpful in learning about disease and genetic conditions, says Headon. While molecular tools are better for diagnosis, exploring the genetics behind these patterns could be used to better understand some chromosomal disorders where fingerprints and creases on the hands are altered, such Edwards Syndrome and Down’s Syndrome. But Headon points out that there are limitations and overuse of fingerprints in certain medical assessments. “In psychology, people have published before that certain fingerprint types are associated with, for example, schizophrenia,” he says. “I’m very skeptical of that research.” Still, he adds that these recent findings on the genetic origins of our fingerprints can reveal a lot about healthy human development.

“These genetic approaches in large populations can give insights into developmental processes taking place in humans that are really largely hidden from view,” he says. “I’d hope this type of study can be applied to other characteristics in humans and give other information about how we develop and how we vary from one another.”