Into the eye of the red storm. 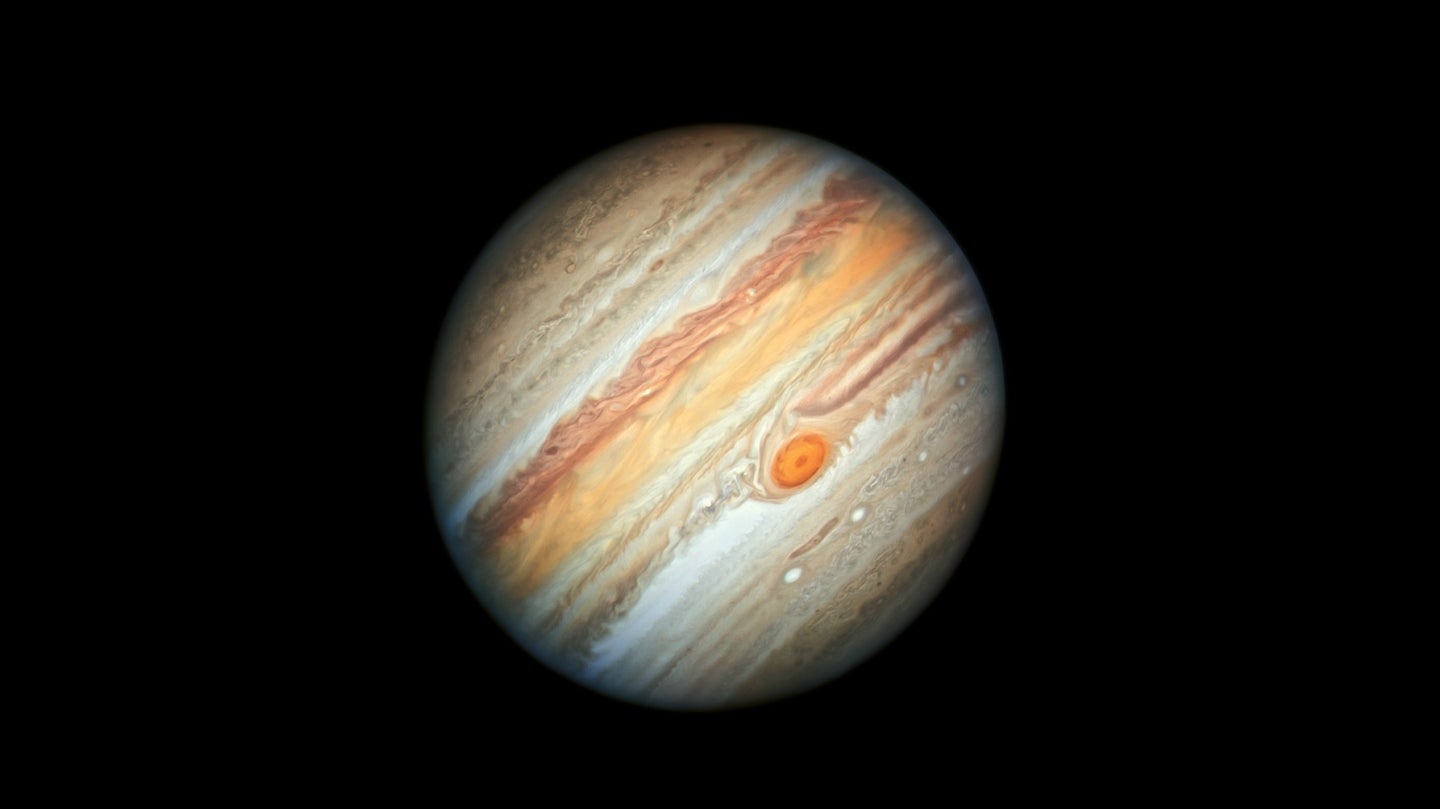 Two new studies using data from the Juno spacecraft have shown the first direct measurement of the depth of Jupiter’s Great Red Spot, the storm that has been raging on its surface for at least hundreds of years.

Astronomers have gazed at Jupiter’s gaseous swirls for centuries, but for the first time, Juno, which launched into orbit around the planet in 2011, is giving them a glimpse of what lies beneath the surface of the planet’s great storm. In doing so, it could give researchers a window into the inner workings of the solar system’s behemoth world. One study used gravitational readings and the other microwave data from Juno’s Microwave Radiometer instrument during recent flyovers of the storm. Both were published in the journal Science this week.

“We flew over the Great Red Spot, and we managed to measure the depth,” says Yohai Kaspi, an atmospheric dynamicist, at the Weizmann Institute of Science in Israel and an author on both studies. He studies the atmosphere of Earth and other planets.

The Juno mission didn’t initially plan on making a low pass over the Great Red Spot, he says he says. Red Spot advocates had to convince the Juno mission team to do a dedicated flyover of the vortex to get the gravity data. In fact, they got two flyovers: one in February, 2019, and another five months later in July.

The increased density of the Great Red Spot compared to the surrounding atmosphere creates “a little mass anomaly,” Kaspi says. It’s almost as if the storm behaves like a small planet would, using its gravity to tug on the spacecraft harder than the surrounding space. And “if you’re accurate enough” one can measure the pull of the anomaly to figure out how massive the storm is.

The spacecraft has an antenna that points towards Earth, and as it accelerates, that causes a tiny doppler shift in the frequency of signals it transmits to Earth, Kaspi says. Like listening for an ambulance coming and going, the team can use this change in pitch to work out how the spacecraft is moving and pinpoint its acceleration.

“Basically, the bigger, the more massive the Great Red Spot is, the bigger push our spacecraft would feel,” Kaspi says.

The microwave data study was able to discern more about the structure of the Great Red Spot. Juno’s microwave instrument has six different frequency channels with which to probe hundreds of kilometers beneath the surface of Jupiter. Each frequency penetrates to a different depth and paints a picture of that layer, says Michael  H. Wong, a planetary scientist at the SETI Institute and the University of California, Berkeley, who is also an author on both studies.

The microwave instrument is able to detect the composition and temperature of different layers, but at its deepest measurement capability, the team still saw signs of the vortex—the cone shaped swirl of air that makes up the storm—making it unclear where it ends.

Luckily, the gravitational data, though lacking in any fine details on the structure of the Great Red Spot, was able to measure the density of the storm, and the gravity team used a model to determine, for a given gravity signal, how deep the storm should extend.

The team thinks the storm reaches to a depth of 300 kilometers, give or take a hundred, with an absolute maximum depth of 500 kilometers. For comparison, weather on Earth happens in the troposphere, which is only about ten kilometers thick. This new data isn’t far off from what previous studies had predicted, Wong says, but it is the first concrete measurement.

The measurement is so exciting, Kaspi says, because we’re moving from the era of detecting the Great Red Spot, to one of “understanding why it’s there,” answering fundamental questions like why it’s this intense, and why it has lasted for this long?