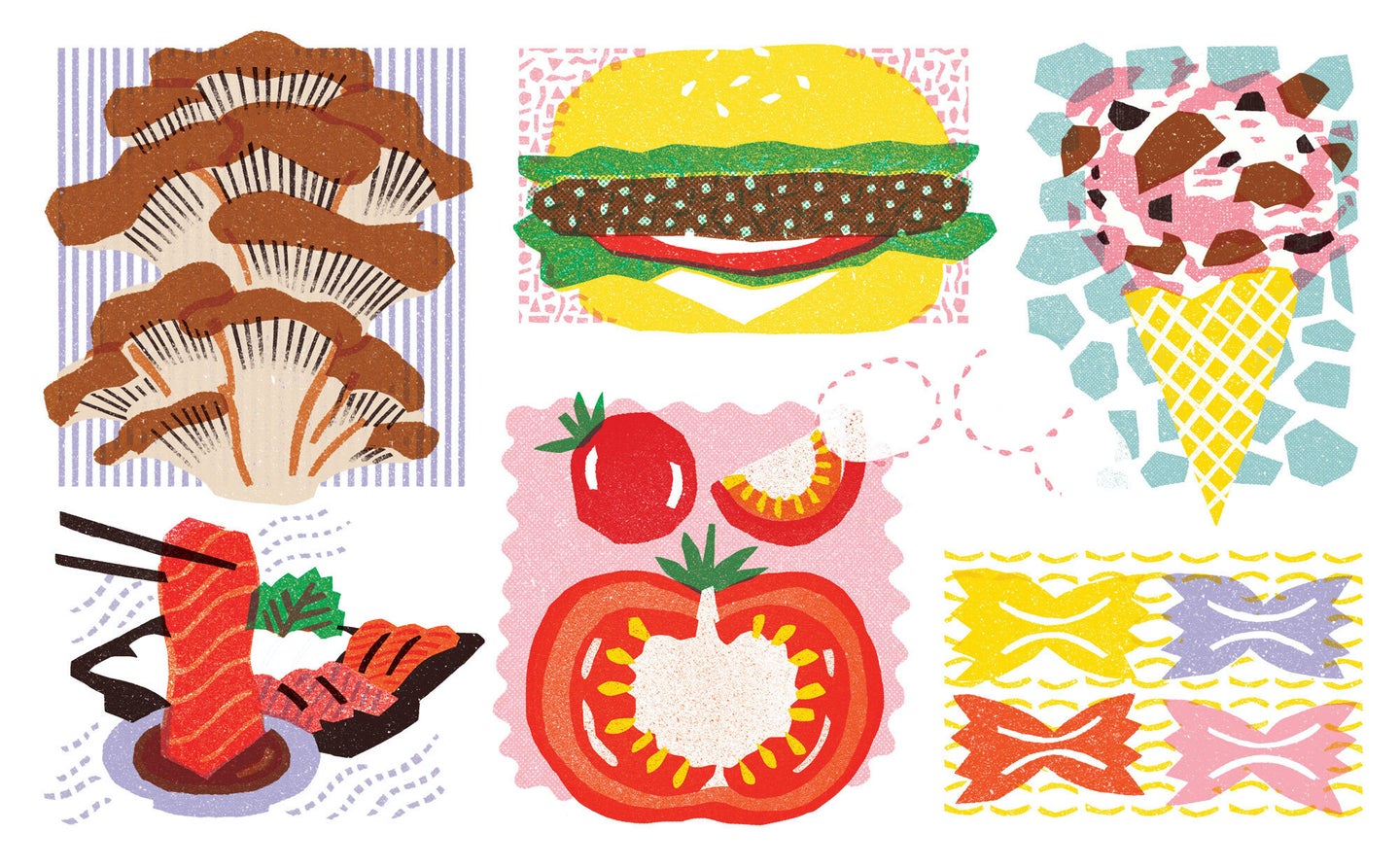 The delights of a chewy mushroom, juicy tomato, or melty scoop of ice cream. Or, the horrors?. Asahi Nagata

What you feel matters.

CONSIDER THE MUSHROOM. Whether it’s a squat button or a broad portobello, many people would rather skip a meal than chow down on spongy fungi. Others may like ’shrooms just fine, but recoil at the slippery innards of a fresh tomato.

What these foods share is that a hater’s dislike is rooted in texture. “What I noticed and also learned by talking to chefs is that most complaints about food are about texture,” says Ole Mouritsen, a professor of gastrophysics at the University of Copenhagen. People may grumble that a dish has too little or too much salt, he notes, but that’s generally where discussions of taste end. It’s more typical for diners to bemoan that a piece of meat isn’t as tender as they’d hoped, or that their fries are soggy instead of crisp.

In the United States, Mouritsen says, texture tends to come up only when it’s gone wrong. But it’s getting newfound attention thanks to efforts to replicate the je ne sais quoi of meat using plant proteins and lab-grown cells. And a COVID-spurred spike in people with diminished sensory perception may push the dining conversation even further in that direction.

Other culinary traditions have long embraced variations in texture, from the sticky to the slimy. Italians cook pasta al dente so it retains a bit of firmness when bitten. In Taiwanese cuisine, diners applaud a springiness known as Q or QQ—the bouncy chew of savory fish balls and the tapioca pearls in bubble tea.

[Related: What is umami?]

According to one 2008 paper in The Journal of Texture Studies, English has only slightly more than 130 words to describe the way foods feel in our mouths. Japanese has more than 400 such terms, most of which are onomatopoeic. There’s hoku-hoku, or the starchy, dense sensation one gets when biting into a steamed sweet potato, and fuwa-fuwa for the structure of light, fluffy treats like marshmallows. English has far fewer descriptors, and most—like crackle, crack, crisp, crunch, and snap—refer to the sensation of biting into something firm. You’d be hard-pressed to find someone describing a delicious meal as going squish or splat.

Americans may be woefully lacking in words to describe the physical sensations of foods that don’t crunch, but texture is a crucial aspect of a dish’s flavor—a term often used interchangeably with taste, but which scientists treat as distinct. Taste is about chemosensory input: how something activates our receptors for sweet, sour, salty, bitter, and umami.

But flavor? Flavor is the gestalt. Taste is a factor, Mouritsen says, but so is “whatever else is happening in the mouth.” After years of neglect by American gourmands, the rise of meat alternatives is pushing mouthfeel to center stage.

A 2020 Gallup poll found that a quarter of US adults had eaten less meat in the previous year than they had in the year before that, with most citing health and environmental concerns. As more folks look to reduce consumption, companies are cropping up to help them do so without sacrificing flavor. According to data from the Good Food Institute, a nonprofit that encourages the production of meat alternatives, the industry grew roughly 70 percent between 2018 and 2020, from $811 million to $1.4 billion. Fast-food chains including Qdoba, White Castle, and Burger King now sell the beeflike morsels of brands like Impossible Foods and Beyond.

But getting something to feel like flesh isn’t easy. The folks at Wildtype, a startup in San Francisco, ran into this problem when they first tried growing salmon in a lab. Their early attempts were “pretty far off,” says co-founder Aryé Elfenbein. They had tested real fish with a machine that analyzed resistance and stretch in an attempt to quantify texture, but “there was a lot that the data just wasn’t capturing.”

To understand why, says CEO Justin Kolbeck, think about what happens when you bite into a piece of sashimi. At first, he says, you notice a touch of fibrousness. But that’s not the whole story. “As you’re chewing, it has that initial give,” he says. “And then when your teeth start to bite into it, there’s almost different layers ripping apart.” Making something taste fishy is one thing; giving people fish flavor means getting that multifaceted chew just right. Once Wildtype figures out what shape cells need to take in order to produce the perfect bite, it can steer its process accordingly.

Companies starting sans animal cells have a tougher time. They’ve got to break down the structure of a plant protein and use it to mimic the shape of an animal protein. That’s one reason Beyond and Impossible began by replicating patties and sausages—not filet mignon. In a 2019 interview, Impossible Foods founder Pat Brown claimed the company would eventually tackle “whole cuts” of ersatz beef, but vegan T-bones have yet to hit the market.

Meanwhile, Mouritsen notes that another growing group of Americans may push for more interesting textural experiences: those who’ve lost their sense of smell. This phenomenon, known as anosmia, has always affected a small number of people—some estimates put it at roughly 3 percent of adults over age 40—because of genetics, illnesses such as Parkinson’s, or radiation treatment. But the condition is becoming more common because of COVID-19. According to one estimate, more than 40 percent of patients experience some loss of taste and/or smell. While research on long-term COVID effects is still scant, it seems this dulling of the senses may be permanent in a small percentage of the population.

People with anosmia often report finding food less pleasurable. This can lead them to opt for more hyperprocessed grub—such products are easier to sense because they tend to contain a lot of salt and sugar—or to suffer from nutritional deficiencies. Shifting the focus to texture can make eating more pleasant. That’s why Ben and Jerry’s ice cream has so many chunks: The eponymous Ben has suffered from anosmia since childhood.

In the case of people who develop the condition later in life, as is the case with COVID patients, Mouritsen says, cranking up the volume of one sensory experience can trigger memories of another. “Mouthfeel stimulates the brain,” he says, “so you sort of remember what the taste and odor used to be like.”