The Mars rover found signs liquid water once ran through rocks made by volcanoes. 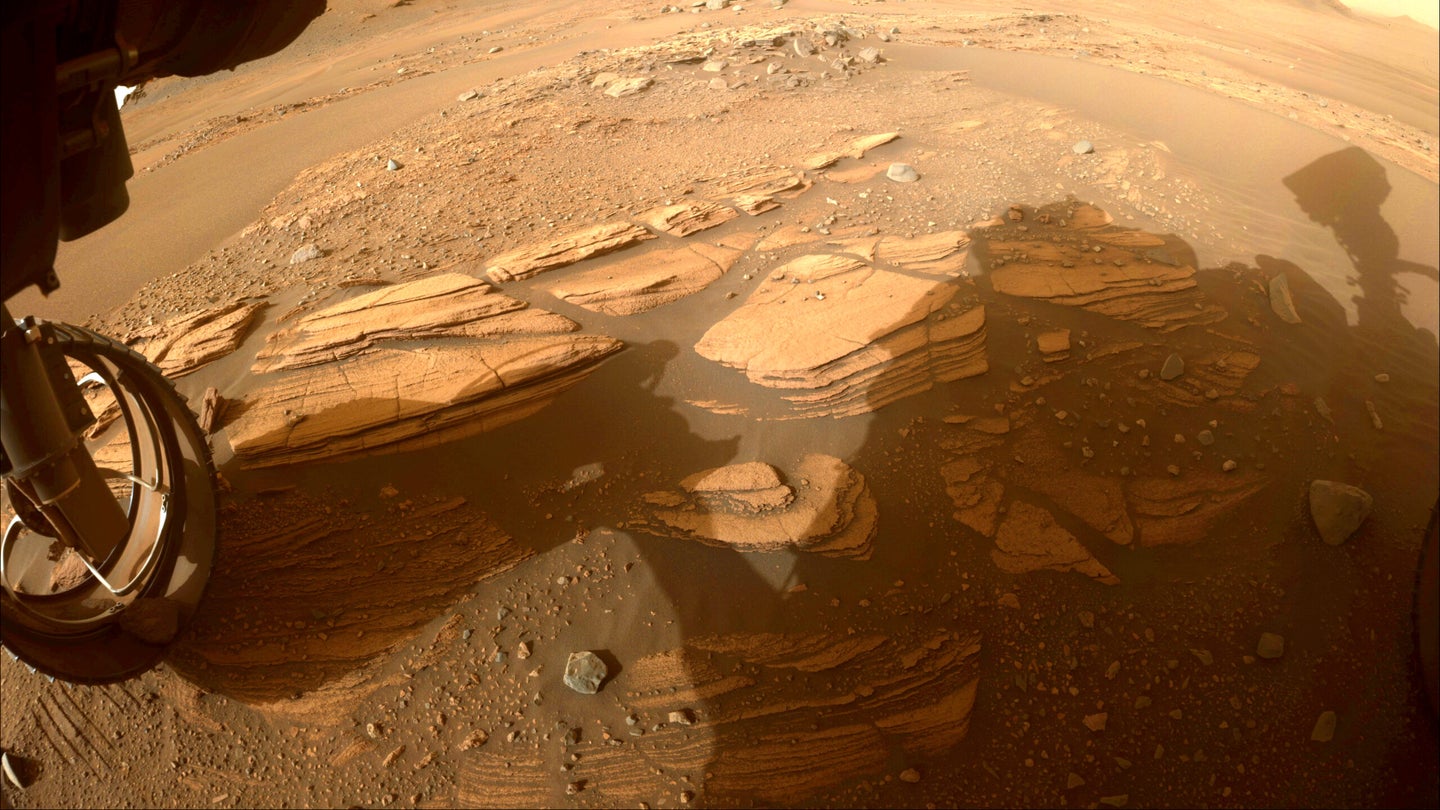 Sedimentary rocks in the shadow of the Mars rover in Jezero Crater. NASA/JPL-Caltech
SHARE

NASA’s Perseverance rover, which landed on Mars nearly two years ago, has released treasure troves of data, key observations, and much-anticipated geologic findings from its first few romps across the Martian surface.

Four papers, published Thursday in the journal Science and Science Advances, report new details of the planet’s geologic history, gleaned from Mars’s Jezero Crater, the site of an ancient meteor impact where the rover touched down just north of the Martian equator. The planet was at one time home to an abundance of lava flows and rocks that, with the presence of water, could have sustained ancient life.

Kathryn Stack Morgan, the deputy project scientist for the Mars 2020 Perseverance rover mission, says that while one Martian area doesn’t necessarily reflect the entire planet’s astrobiology, Perseverance’s discoveries provide evidence to connect what scientists have learned there to other regions. The new finds also challenge what humans know about habitable environments, because it’s possible any life that sprung from Mars’s primordial soup would look completely different from anything we’re familiar with.

Here are five rock-solid takeaways from Perseverance’s escapades exploring what used to be an ancient Martian lake, as detailed in these papers.

Rocks are some of the best recordkeepers of climate and habitability, but scientists weren’t sure that Mars had the range of rocks that exist on Earth. “Prior to landing, there was a lot of speculation about whether the rocks of the crater floor would be sedimentary,” says Stack Morgan, who was a co-author on the paper. “As much as we liked sedimentary rocks for their astrobiology potential, we were really hoping to find diversity.”

And they found it sooner rather than later: One of Perseverance’s most exciting discoveries revealed that the floor of the Jezero crater is home to a substantial amount of igneous rocks, stones that can only be formed by the cooling and solidification of molten liquid magma. In essence, volcanic activity may have been a more important process in that part of Mars than scientists previously thought.

Was Mars a slow cooler?

One study revealed that the igneous rocks Perseverance found are made up of coarse-grained olivine, a common rock-forming mineral that is also abundant on Earth. Olivine is one of the first minerals to crystallize out of magma, but on our planet, these grains are smaller and more glassy than the coarse Martian stuff. Researchers posit that this discovery could have meant that Mars cooled rather slowly, deep underground.

As the rover also found evidence of large amounts of olivine on the surface, its presence could signal that the mineral is just as widespread in other regions beyond Jezero crater. In such a case, researchers note that this olivine-enriched ground could be explained by lava flows on Mars being thicker than on Earth.

Martian rocks have the right stuff for life.

Although NASA has yet to uncover living things on the Red Planet, researchers found evidence that the planet may have been more habitable during the late Noachian period, from about 4.1 billion to 3.5 billion years ago. Two of the four studies describe how magma-made rocks on Mars have been altered by water. But why is water running through rocks a big deal?

On Earth, when water and certain igneous rocks interact with each other, the reaction can yield an array of nutrients, including H2 or CH4, potential energy sources for life. This creates a diverse biome, a utopia ripe for microbial life. Because of Perseverance’s expedition, scientists found that rocks on the crater floor appear to contain salt minerals like sulfate, perchlorate, and carbonate, signs that liquid water flowed through these rocks. These rocks also contain simple organic molecules, which could have helped to sustain habitable environments.

Although the igneous rocks they found were discovered in a volcanically active area–not an environment humans would consider conducive to existence–the study notes that there is evidence the rocks experienced water at multiple points in its history, and might once have had all the ingredients to support ancient life. “It really opens the possibilities there in terms of the kinds of habitable environments that once existed on Mars,” says Stack Morgan.

Welcome to the underground layers.

While some researchers focused on the topmost crust of the crater, one team decided to examine the ground under the rover, using an instrument called the Radar Imager for Mars Subsurface Experiment (RIMFAX). Their paper chronicles the first eight months of the mission, during which RIMFAX took a continuous radar image of the Martian subsurface. The radar revealed new properties of the bedrock about 50 feet under Jezero’s surface: The internal morphology of the crater could be categorized as either magmatic layering, formed by igneous rocks undergoing bulk chemical changes, or sedimentary layering, dirt commonly formed in aqueous environments on Earth.

According to one of the studies, the presence of these buried structures is “compatible with a history of long-lived igneous activity and a history of multiple aqueous episodes,” effectively supporting the theory that water once flowed freely on Mars.

Mars samples will arrive as soon as the early 2030s.

One of the most important aspects of the Perseverance mission is its capacity for Mars sample return. The rover was built to collect about 35 rock and soil samples to be transported to Earth for detailed laboratory analysis. This will be a complex, multi-year mission: It’s likely scientists won’t get their hands on the samples until the early 2030s. Besides being able to let us peer into Mars’ surface history, one study notes that the returned samples could also offer some insight into the role that Mars’ magnetic field had in its evolution.

On Earth, our geologic history is driven by dates and events in the past. But because scientists’ timescale of Mars is largely relative and can only be estimated in comparison to the age of rocks from the moon, geologists can have a hard time trying to use this method to date the surface. “We can look at the surface of Mars and say, well, we think this thing is older than that thing,” says Stack Morgan. “But we don’t actually know when these events happened.”

[Related: This miniature rocket could be the first NASA craft launched from Mars]

But by analyzing the returned samples, scientists could start to pin down exact ages and dates, and really revolutionize the geologic timescale of Mars, Stack Morgan says. But there’s still much to do before then.

“It was an incredible first year of the mission,” she says. ”This is just the start for this whole effort, and [we] hope that everybody’s really excited about it the way that we are.”